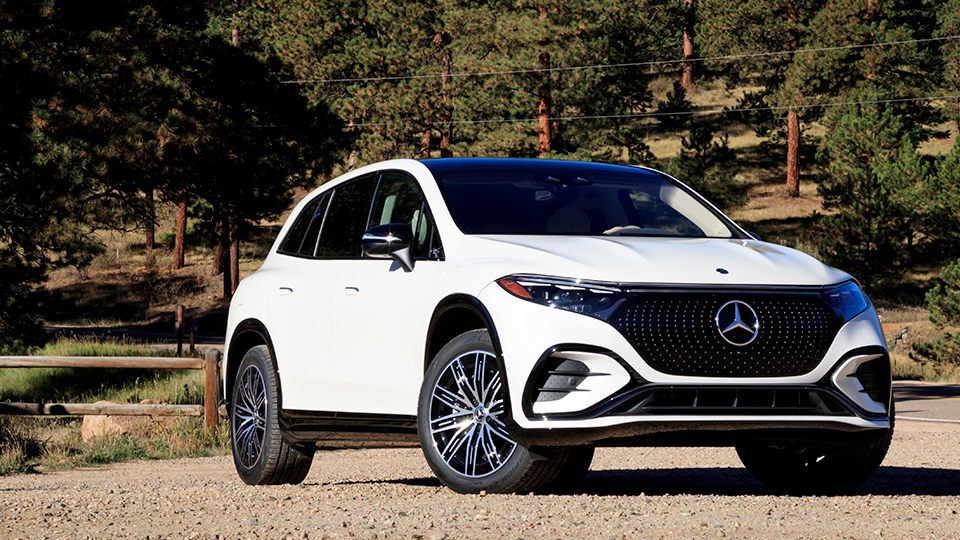 Until pretty recently, if you wanted a big, three-row electric SUV the Tesla Model X was the only game in town. Now there are three, with the 2023 Mercedes-Benz EQS SUV and Rivian R1S arriving this fall. While the Rivian is aimed at outdoorsy adventurers, the Mercedes is a lavish, luxurious electric analog to the automaker’s gas-powered flagship GLS-Class SUV.

Soon there will be even more, with Kia’s mainstream EV9 and the thus-far-unrevealed Lucid Gravity due in 2024, but the two-row versions of the EQS SUV also compete with BMW’s recent iX. As the field of electrics grows, so does the competition, but the EQS SUV is certain to draw lots of attention from EV-curious premium buyers.

Derived from the futuristic, lushly-appointed EQS sedan and riding the same platform, the EQS SUV is just as much of an opulent standout as that car, but offers more room, a more conventional shape and a few talents and features that the sedan does not. There are some downsides, namely even more weight, but this is clearly the most luxurious fully electric SUV on the market, and distinctly less weird on the outside than the iX.

Sadly, no AMG version seems to be in the cards and the extra size means extra weight over the sedan, but there’s lots to love. It’s filled with cutting-edge technology, beautiful details and soothing comforts and it’s a good performer on and (surprisingly) off the pavement.

To see how it compares to its closest competitors, I got to sample all three versions at a Mercedes-hosted media event around Denver, Colorado.

The soft, muscular shape makes the EQS SUV look smaller than it actually is (201.8 inches long), but at speed, you’re always aware of how hefty it is. The big Benz weighs just shy of three tons in single-motor 450+ form, and the 580 tips 6,228 pounds.

Whisking the EQS SUV through the curvy twists and turns of Arapaho National Forest, the big machine proved surprisingly engaging and very stable, but no amount of air-suspended, variable-damping trickery can truly disguise all that bulk.

Still, even twisty roads can be fun in this SUV, particularly in Sport Mode, which firms the suspension, reduces ride height and tightens steering response, but it understeers when pushed hard. That said, it’s far more car-like and precise than arks like the Cadillac Escalade or Lincoln Navigator. BMW’s iX is more agile, but it’s also smaller and lighter.

The iX and Model X are 600 to 900 pounds lighter than the EQS SUV, which makes every version of the Mercedes slower off the line than its primary competitors. The fastest 580 gets to 60 mph in 4.5 seconds, but even the base iX xDrive50 does it in 4 seconds and the base-model Tesla is faster still.

Stopping distances also seem longer than the impressive braking of its gas-powered GLS-Class sibling. After getting cut off by an errant Toyota Tacoma on the highway, I was happily assured that the automatic braking system works very well. You can’t stop chaos gremlins, but the EQS intervenes quickly when it senses danger.

As on the EQS sedan, there are four brake regeneration settings (Strong, Normal, None and Intelligent, which factors in traffic and geography) controlled by steering wheel paddles, but driving in one-pedal mode requires turning off the creep function in a menu. Even then, the “strong” setting isn’t as aggressive as some other EVs and, disconcertingly, the brake pedal moves on its own during regen.

Adaptive cruise control is standard, and while not a true hands-free system, it’s as smooth and precise as GM’s Super Cruise in many respects and easily the equal of Autopilot. In Europe, Mercedes-Benz is already selling its Level 3 semi-autonomous Drive Pilot system on the EQS sedan, but it’s not legal here yet.

Though few buyers will take their EQS SUVs onto serious terrain, Mercedes-Benz was keen to show off the EQS 580 4Matic SUV’s trail ability on a narrow, rocky ATV trail near Idaho Springs. The Rivian R1S is the off-road EV SUV king, but the EQS SUV proved quite adept in this situation, with one caveat.

What’s that? The 580 I drove was fitted with 450-spec 20-inch wheels and non-stock all-terrain tires rather than the standard 21-inch rims and all-seasons. There are no plans to offer these tires as a package, the automaker says, and they’d probably increase road noise, but they did add real capability.

The off-road mode raises the ride height by 25 mm to just over 8 inches but also includes hill descent control. There’s also a helpful inclinometer display. The SUV had no trouble on moderate dirt and rocks and even took on big moguls. But the most useful feature here was the rear-axle steering, capable of turning to 10 degrees counter to the front wheels.

The rear-axle steering makes the EQS SUV exceptionally maneuverable, with a turning circle of just over 36 feet (to the GLS’ 39.4). Over 37 mph the rear wheels turn with the fronts, making lane changes more stable.

While the R1S dominates off-road, the EQS SUV can do things off-road that the iX and Model X simply can’t, and fitting all-terrain tires to the Tesla is made much harder by its brake and suspension design.

As with every other driving situation in the EQS SUV, the off-road jaunt was conducted in almost total silence. Venturing into nature in this vehicle means never scaring off the wildlife with your engine or giving up its serene comforts.

Since the EQS sedan and SUV are so closely related, it’s natural that the SUV’s cabin is much like the sedan’s, but that’s no bad thing. Though the 56-inch Hyperscreen is wall-to-wall futurism and the ambient lighting the stuff that Vaporwave neon dreams are made of, the rest of the interior plays to Mercedes-Benz’s traditional luxury strengths. It’s beautifully detailed, soothingly comfortable and immaculately crafted.

The 450 and 450+ models start off with smaller displays, but the Hyperscreen is optional in all and standard on the 580. It’s actually three displays in one, a central 17.7-inch screen and two 12.3-inch units on either side for driver and passenger. Unlike the sedan, the EQS SUV’s passenger screen can now stream video while in motion, but sensors will dim the display if they detect the driver getting distracted.

The augmented reality navigation system and head-up display in the 580 make it almost impossible to get in the wrong lane or make the wrong turn, and the displays look great. The downside of the hyperscreen, despite the MBUX infotainment system’s excellent user experience design, is screen overload and potential distraction.

You acclimate to adjusting almost everything via touchscreen tapping and thankfully the air vents are manual (they aren’t at Tesla or Rivian), but there’s still a lot to navigate. Using the voice-controlled “Hey, Mercedes” digital assistant can usually set things right.

EQS SUV drivers will have to stop to charge every 300 miles or so, but the built-in “Energizing Comfort” program comes with sound, seat vibration and visual experiences to keep them refreshed. This concept sounded corny until I used the “Sounds of the Sea” cycle. The crystal-clear Burmester sound system’s vibes really were relaxing.

In terms of material quality and interior design, only the iX compares, but it borders on stark while the Mercedes is sybaritic. The Tesla feels low-rent and plasticky by comparison, and the Rivian plainer and more utilitarian.

The front seats, heated and ventilated, are as comfortable as a Bentley Bentayga’s, and the back seat is hugely roomy in the two-row configuration, with more than 41 inches of legroom, more than BMW, Tesla or Rivian.

Things get murkier with three rows. The EQS SUV’s third row is about the same size as the alternatives but offers distinctly better headroom than the Tesla.

The Rivian has an edge in entry and egress, but the Mercedes’ seats are nicer. Once you’re back there it’s reasonably comfy and there are 32 inches of legroom. On all three these seats are for little kids, and fitting them back there means moving the second row forward a  bit. At the very least, parents can probably hear whispering in the third row even at 80 mph.

Among the EQS SUV’s direct competitors Tesla still rules the roost in rated range. In reality, the X often underdelivers on its estimates but also enjoys the ease of the supercharger network.

In my observation, the Mercedes should live up to its range claims, and my real-world observations suggest the 580 4Matic would return about 290 miles on a full charge. I didn’t run it all the way down, but that’s slightly better than its estimates (285 for the 450 and 580 4Matics, 305 for the 450+).

Mercedes claims all three EQS variants can charge from 10% to 80% in 31 minutes on a 200 kW fast charger, although finding one of those can still be a real odyssey. For now, it’s wiser to plan overnight charging at home (12.5 hours from zero to 100% on a 240V wallbox) or assume most fast chargers will be no more than 150 kW, which means longer waits.

When will the 2023 Mercedes-Benz EQS SUV be Available and What Will it Cost?

As with its sedan predecessor, the EQS SUV is a truly compelling alternative to Tesla (and lots of gas-powered luxury SUVs) from a brand known for quality and technological innovation. There are some downsides: It isn’t quite as quick as some of its rivals, the third row is small and fast charging might be harder than with Tesla. But it’s hands-down the most luxurious large electric SUV on the market thus far, and a comfortable, easy-to-live-with machine.

Mercedes-Benz provided lodging and meals to enable Forbes Wheels to bring you this first-person drive report. Although Forbes Wheels sometimes participates in manufacturer-hosted events, our coverage is independent, unbiased and aimed at offering consumers an objective view of every vehicle we test.