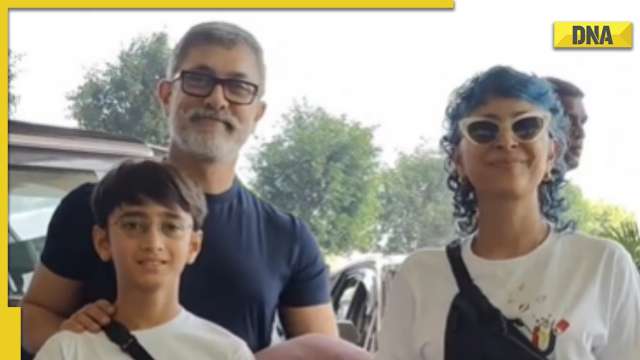 Laal Singh Chaddha star Aamir Khan, on Thursday, was spotted at the Mumbai airport with his ex-wife Kiran Rao and son Azad Rao Khan. After Ira Khan’s engagement, this was their first public appearance.

The celebrity photographer Viral Bhayani shared the video on social media in which Aamir can be seen donning a blue t-shirt with joggers and carrying a pillow. While Kiran was seen wearing a casual outfit. They were seen posing for the paps and smiling at the cameras.

Recently, Advait Chandan attended the 53rd International Film Festival of India in Goa, on November 21, where he was part of the discussion ‘Filmmaking is a teamwork’, along with another director Shoojit Sircar. Advait has directed two films in his career till now, and both of them featured Aamir Khan – Secret Superstar in 2017 and Laal Singh Chaddha this year.

Talking about his association with the superstar actor as part of the discussion, the filmmaker said, “He is a film school. I have learnt a lot from him. I have been the production assistant, AD, I have been his manager, and I have written and directed films also. There’s a lot I have learned from him.”

“For me, he is genuinely my guru. One of the things that I have really learned from him is that he is very open. Even as an assistant or production assistant at Taare Zameen Par, I could go up to him and share my suggestions. He genuinely listens and he is open, and that’s something that I have tried to become”, Advait further added.

Meanwhile, Aamir Khan has announced that he will take a break from acting for a year and a half, Advait Chandan hasn’t yet revealed details about his next project.