Alicent’s Green Dress on ‘House of the Dragon’ Has Meaning 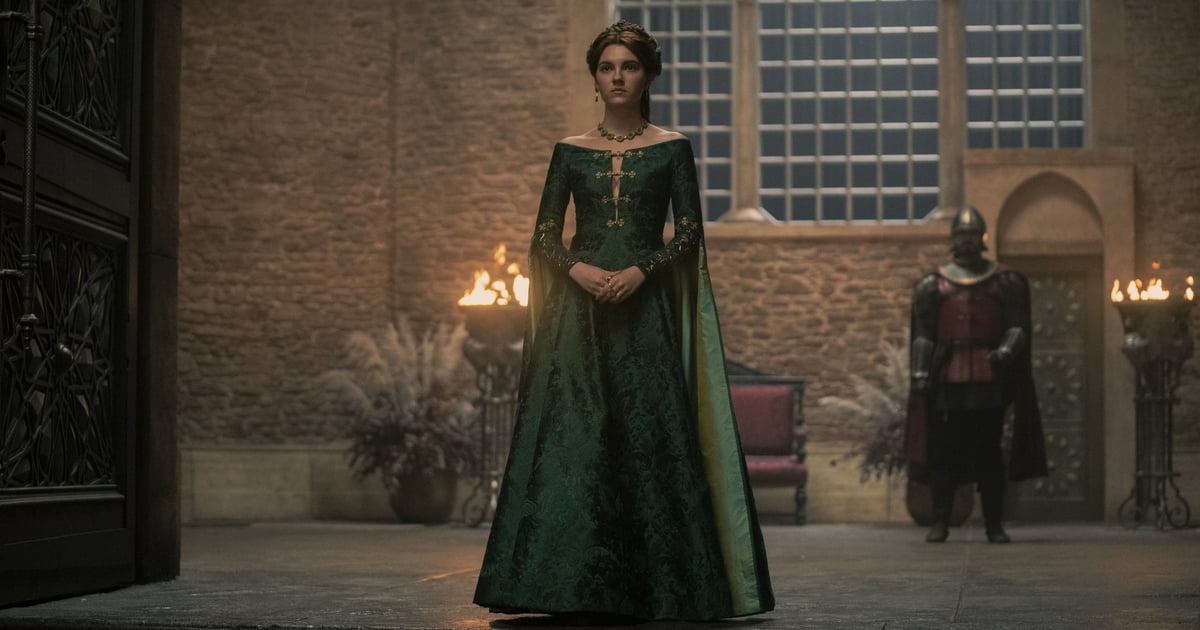 Image Source: HBO
“Game Of Thrones”‘s critically-acclaimed extended universe and prequel show, “House of the Dragon,” is mid-way through the premiere season, and last night’s episode was jam-packed. In the hour-long episode, fans witnessed bubbling romance, betrayal, a royal wedding, blood, murder, and the green dress that launched a thousand ships.

In particular, viewers are learning how figures in the pre-“Game of Thrones” Westeros cannon use the power of dress to enhance their agenda. We saw it with Cersei and her short cut and dark gowns alluding to revenge; with Daenerys and her shift from an innocent white wardrobe to the cloaks and gowns befitting of a monarch; and now, in episode five, the queen of Westeros, Alicent Hightower, takes center stage. Hours late, she enters the great hall for the feast celebrating the wedding of Rhaenyra and Laenor, wearing an elaborate, green jacquard gown with gold appliqué. Fans are progressively seeing her character grow into her own, particularly through her dress, but this instance is even more nuanced.

Not only was the dress beautiful and befitting of a royal union, but it also was quite symbolic. Alicent is married into the house of Targaryen, whose colors are black and red. As a representative of that said house, a dress in the vein of that color palette would have been fitting. Her opting for a green dress “is an act of defiance on Alicent’s part,” according to Comic Book’s Charlie Ridgely.

There’s a scene where two lords discuss the queen’s entrance and the symbolism behind the green gown. Apparently, the colors of the flame atop Alicent’s house, High Tower, change depending on certain instances. “Green signifies the calling of their banners, which usually means going to war,” explains Ridgely. Perhaps her dress is a foreshadow that war, or atleast conflict, could be on the horizon.

In the episodes to come, as we shift ten years in the future and see our main characters grow and dynamics shift, will this one green dress significantly impact the course of the great houses of Westeros? Only time will reveal.

Ticket To Paradise Reviews Are Online, And Critics Are All About The George Clooney And Julia Roberts Pairing

How to Pack for Italy: A Guide on Exactly What to Wear

Bollywood songs that amp up the festive spirit this Navratri

Jessica Simpson In Leather Romper With Maxwell In Los…

Watch: The Danes Make a Daring Last Stand in ‘Vikings:…

How the Montreal Protocol Helped Save Earth from a Climate…