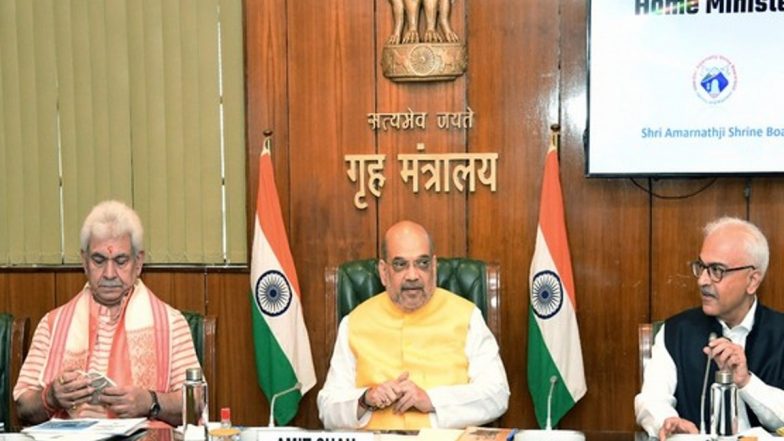 New Delhi, May 17: Union Home Minister Amit Shah on Tuesday chaired two separate back-to-back marathon meetings on preparations for the Amarnath Yatra, an annual pilgrimage which is all set to start on June 30 after a gap of two years.

The first meeting, which started around 11.30 am, lasted for about 45 minutes. Logistics, health infrastructure, temporary hospital facility, planning for any emrgency situation, road connectivity and other management of the pilgrimage to the 3,880-metre-high cave shrine of Lord Shiva in Jammu and Kashmir, located in the upper reaches of the Himalayas, were also discussed in the meeting, said officials privy to the development.

Issues linked to arrangements in case of possible landslide on the pilgrimage route, sudden change in weather were also among the topics discussed in the meeting, they said. The pilgrimage is held from the twin routes of Pahalgam and Baltal.

The second meeting, which started soon after the first meeting ended, was related to the security of Amarnath Yatra, deployment of security personnel, threat assessment and other points linked to it. The meeting lasted for about one-and-half hours. Amit Shah Reviews Jammu and Kashmir Situation at High-Level Meeting.

National Security Advisor Ajit Doval also attended the second part of the two meetings which was linked to security. The two meetings were held days after Union Home Secretary Ajay Kumar Bhalla convened two similar meeting to review security preparedness of the annual pilgrimage– one on May 13 here in Delhi and other in Jammu and Kashmir on April 15.

Shah, sources said, was apprised of logistic supports and security updates and deployment of Central Armed Police Forces on specific location during the pilgrimage as well as the situation in the region along with other issues related to the pilgrimage.

However, online registration for Amarnath Yatra 2022 has started from April 11 and the Home Ministry has already sanctioned nearly 50 companies of CAPF for the purpose to provide security during the pilgrimage as Jammu and Kashmir is expecting nearly five lakh pilgrims visiting the Amarnath cave shrine this year.

While online registration has already begun, the pilgrimage is scheduled to be held for 43 days between June 30 and August 11. The J&K government had cancelled the annual Amarnath pilgrimage due to the prevailing Covid-19 situation in 2020 and 2021 after a discussion with Amarnathji Shrine Board members.

Broadcasting From The Crucible – World Snooker

Search is on for a permanent venue