Amarnath Yatra 2022: First Batch of Pilgrims Leave for Valley From Jammu Base Camp 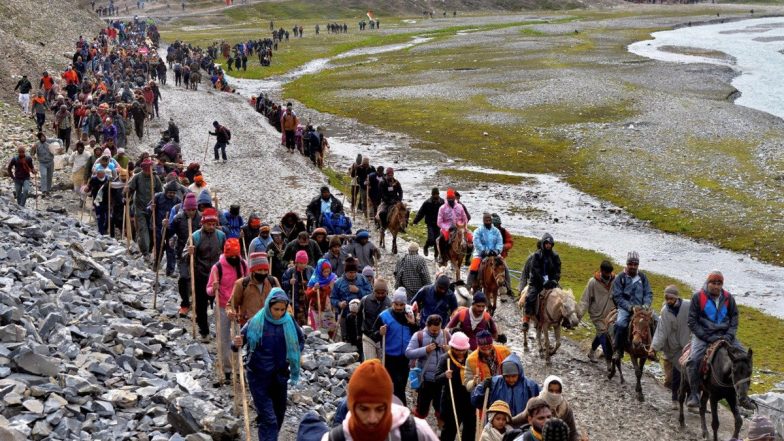 Jammu, June 29: The first batch of pilgrims for the Amarnath Yatra which begins on Thursday, was flagged off by J&K Lt Governor, Manoj Sinha from Jammu base camp on Wednesday.

The batch including 717 pilgrims who left for the north Kashmir Baltal base camp, was flagged off from Bhagwati Nagar base camp by Lt Governor, Manoj Sinha around 5.30 a.m. on Wednesday. Maharashtra Political Crisis: BJP Leaders Meet Governor Bhagat Singh Koshyari, Want MVA Government To Prove Majority.

The Amarnath Yatra 2022 begins on June 30 and it will conclude on August 11 on Shravan Purnima coinciding with the Raksha Bandhan festival.

The pilgrims left in a convoy for the Valley escorted by security forces. Both north Kashmir Baltal and south Kashmir Pahalgam routes of the Yatra are being security by hundreds of security forces drawn from the army, central armed police forces (CAPFs) and the local police.

For the first time, authorities have issued radio frequency identification (RFID) tag to each pilgrim so that his/her movement is monitored for safety and security purposes.

MeT department has forecast dry weather along both the Yatra routes on Wednesday.

Authorities have said around eight lakh pilgrims are expected to perform this year’s Yatra which is being held after three years. In 2019, the Yatra was cut short ahead of the abrogation of article 370 while it remained suspended in 2020 and 2021 because of the Covid pandemic.

(The above story first appeared on LatestLY on Jun 29, 2022 08:26 AM IST. For more news and updates on politics, world, sports, entertainment and lifestyle, log on to our website latestly.com).