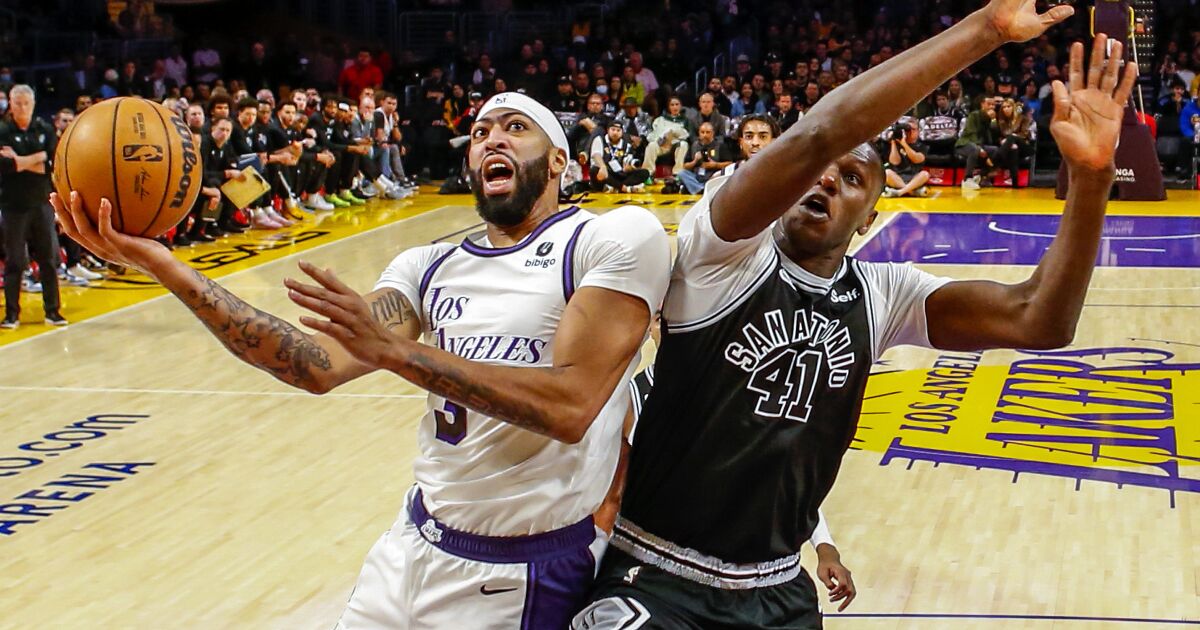 Eventually, it’ll be harder for the Lakers to follow this path, the one that everyone seems to agree is the one with the best chance of leading the team to a successful season.

But for now, with LeBron James on the bench recovering from a strained adductor muscle, there’s no doubt about what the team needs from Anthony Davis.

Him being great, playing at a most-valuable-player caliber once again, is the clearest pathway to Western Conference relevance.

And, for the third consecutive game, he’s given the Lakers everything they could possibly need.

“We just locked in,” Davis said.

Early in the fourth, Davis went to the bench with 30 points, 18 rebounds, three steals and a block. The Lakers were up big — so big, in fact, that Vin Diesel felt comfortable enough to come down behind the Lakers bench to say hello.

Davis and James then jokingly challenged him to drive a car off of the Lakers’ home arena and do a flip or something.

“If you’re as good as you say you are…” Davis said he told the actor.

Really, for the first time this season, the Lakers looked completely comfortable for the entirety of a game, the mental lapses happening in relative blinks in between long stretches of dominance.

The Lakers were 34 points better than San Antonio in Davis’ 28 minutes.

Just like he did in wins against Brooklyn and Detroit, Davis dominated at the rim, his presence making life easier for the Lakers’ perimeter players.

“AD has to be the leading force, the leading charge just in terms of how we want to play inside and outside basketball,” coach Darvin Ham said after the win Friday. “Pressure on the rim, pressure in the paint constantly. … The biggest thing is we know we have to get AD going. That gives us our best chance to be successful. Everyone in that locker room knows that — player, coach and otherwise.”

That was clear again.

“He has to be the focal point,” Ham said Sunday.

The message is easier to deliver when James, one of the greatest NBA players ever, is out and Russell Westbrook is coming off the bench. And though James was listed as questionable Sunday, Ham didn’t make it seem like much of a question before the game.

“There’s no need to be in a hurry with him. He’s going to definitely play a big bulk of games this season. It’s November,” Ham said before the win. “… So, it’s like, we have time on our side. …We just want to be as cautious as possible. So, again, it doesn’t turn into something that he’s constantly dealing with all season.”

“It’s big for us,” Westbrook said. “Miss or make, when he’s aggressive in the paint, it makes us a different team.”

Austin Reaves scored more than 10 for the fourth straight game, scoring a season-high 21 on Sunday against the Spurs.

Westbrook had 10 assists, as well. It’s his fourth straight game with at least 10 assists.

“He’s really brought a lot of balance with our lineup,” Ham said.

Westbrook had his right thumb wrapped after the game and would be re-evaluated Monday morning, Ham said. The Lakers later said that X-rays Sunday night were negative.

The Spurs, who have one more win than the Lakers, looked woefully undermanned, the Lakers holding them to 39% shooting and limiting them to 10 free-throw attempts.

Spurs coach Gregg Popovich spoke kindly before the game about James, Ham and his former player, Walker, but he was unable to coach because of illness.

The Lakers play the Suns on Tuesday in Phoenix, the first in a stretch in which the Lakers play only six times in Los Angeles before the start of 2023.