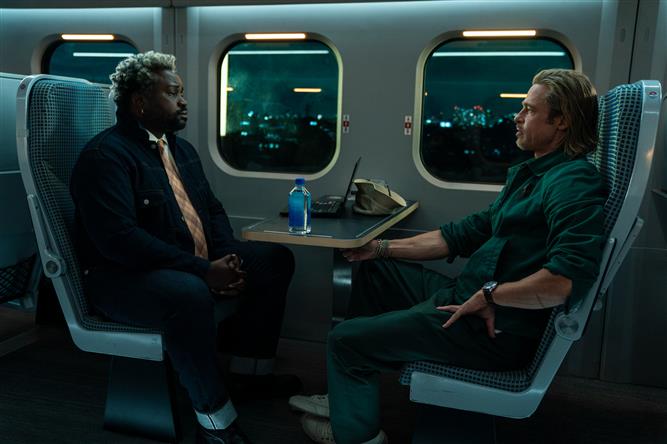 A clutch of assassins are aboard the supersonic Bullet Train from Tokyo to Morioka. And, it’s not just bullets that unfurl at scintillating speed but more importantly humour. Yes, you could call it dark for humour is certainly centred on a pile of dead bodies. But if you can overcome that hiccup or revulsion (if you please), after all blood oozing out of man’s eyes as his body is being tossed around to generate laughs isn’t quite everyone’s cup of tea.

However, if you remember this is just a film out to entertain you, you will certainly enjoy more than a good laugh. Most punch-lines hit home and if writing is the mainstay of this comic actioner, so are fine performances. Even though, the star, nay superstar, here is Brad Pitt as Mr Ladybug, who in his Zen like state even refuses to pick up the revolver before boarding the train…other actors don’t get a short shrift either. Most interesting is this Lemon (Brian Tyree Henry) and Tangerine (Aaron Taylor-Johnson) duo whose sibling chemistry has you on a roll. With mirthful dialogues like, “You look like every white homeless guy I’ve ever seen,” Brian Tyree Henry clearly hogs the best lines delivered with even better timing.

Based on the Japanese novel Maria Beetle (published in English as Bullet Train) by Kotaro Isaka, the screenplay by Zak Olkewicz spreads out in many directions and has many tentacles.

If Mr Ladybug has been assigned the job to flick the bag, Lemon and Tangerine are supposed to keep guard of a don’s son (Logan Lerman) and ensure the bag reaches the father. If you think three’s a crowd, well, many more join in. Andrew Koji as Yuichi Kimura happens to be a Japanese assassin. There are characters and characters with stories and back-stories. Wolf (Benito A Martínez Ocasio) is out to avenge his wife’s murder. Zazie Beetz as The Hornet harnesses snake venom. And of course, if humans named after flora and fauna are not enough, a snake is slithering by.

Fine editing by Elisabet Ronaldsdottir takes you back and forth as you soak in details on who is who. Not all details or character studies are meant to stick. Among the line-up of male assassins, one woman stands tall and smart too. Joey King with the right degree of cockiness posing as a school girl is one cunning cookie out to kill The White Death.

On board the train which is at the centre of drama and action, the paths of all assassins cross and lead them to one man, The White Death. Flashback and we meet this Russian don who has found his way by backstabbing a Japanese mafia leader. Clearly, vengeance is in order. The story set in Japan has many threads which do get tied up by the time the two-hour-six-minute film is over. Not all of the interplay of mob wars, especially the final big reveal or even gravity defying action is convincing. Nor is it meant to be. Rather slick momentum and fine dose of wisecracks make it a fairly enjoyable journey.

Good while it lasts, here is to fun and laughter. Sure enough we have some heavy duty Japanese wisdom on how Ladybug hides seven sorrows within and what part fate “Everything that has ever happened to you has led you here,” plays in our lives. But make no mistake, in this spoof like replay of Kill Bill kind of actioner, few things are meant to be taken seriously or literally. The gleaming presence of Sandra Bullock and fleeting one of Ryan Reynolds is the icing on this fun offering meant to remind you just that. As Brian Tyree Henry’s character sums up how entertainment today has “twists, violence, drama – no message.” Well, this might as well be the director David Leitch of Deadpool 2 and Fast & Furious Presents: Hobbs & Shaw fame speaking.