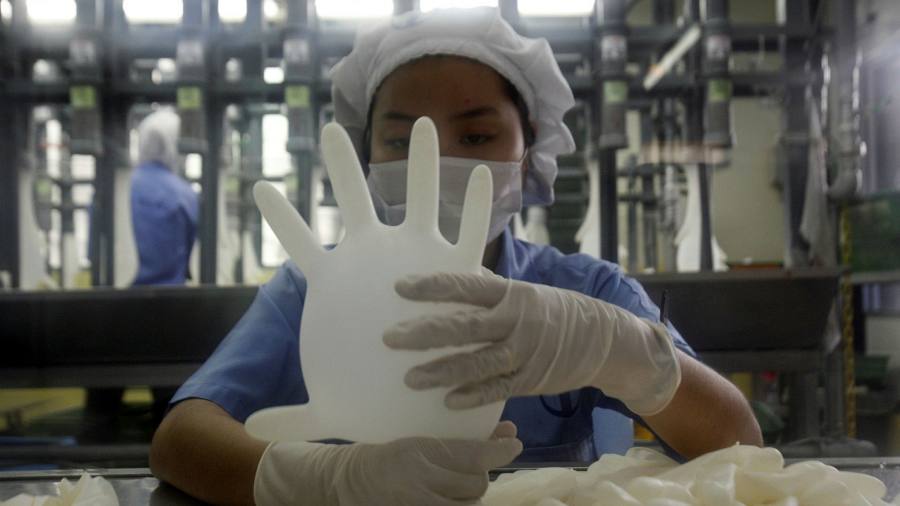 Billions of dollars in market value of Asian makers of protective and medical gear has been wiped out by the prospect of effective Covid-19 vaccines, denting a rally that was prompted by the pandemic.

Shares in Kuala Lumpur-listed Top Glove, the world’s largest maker of rubber gloves, have dropped almost 30 per cent from their October peak as of Tuesday, lopping about $5bn off its market capitalisation as part of a sell-off that has hit PPE groups across the region.

Most of that plunge has followed a flurry of announcements by drugmakers since early November of successful vaccine trials that have raised the prospect of an end to the nearly year-long health crisis and prompted investors to reassess future demand for PPE equipment.

The latest positive trial results on Monday came from AstraZeneca and Oxford university, whose vaccine is easier to distribute than those from peers such as Pfizer.

Shares in Top Glove were down as much as 7.5 per cent on Tuesday after the Malaysian government, a day earlier, announced plans to close half of the company’s factories in stages due to a coronavirus outbreak. In Hong Kong, the healthcare segment of the Hang Seng index dropped 4.6 per cent.

Andy Maynard, a trader at China Renaissance, said that the trial results announcements had “taken the shine off” medical equipment and healthcare stocks. “It’s a little bit of a knee-jerk reaction,” he said. “This is relatively short-term money that took advantage of the virus”.

Top Glove’s shares are still up more than 350 per cent over the past year.

Geoffrey Wong, head of emerging markets and Asia-Pacific equities at UBS, said those developments have encouraged investors to rotate out of companies that have rallied during the pandemic and into those that get “the full benefit of people starting to spend again” as normal life resumes.

Other PPE makers across Asia have also been swept up in the sell-off. Shares in Malaysia’s Kossan Rubber have fallen a quarter from their October peak and those in Thailand’s Sri Trang Gloves are down almost 18 per cent since the first independent analysis of a potential Covid-19 vaccine’s phase 3 clinical trials was announced in early November.

Analysts pointed out that some of those diversified beyond PPE goods could rebound following the pandemic.

Shares in Shenzhen Mindray Bio-Medical, whose sales of masks and other pandemic related goods have soared in recent quarters, have dropped 16 per cent over the past two weeks.

But Carol Dou, an equities analyst at UOB Kay Hian, said Mindray could fall back on sales of goods unrelated to the pandemic. The company sells a broad range of medical equipment, including imaging systems and defibrillators.

“For companies that only produce pandemic-related products like masks and PPE, I don’t think that will be possible for them,” she added.

How to Give Customers the Digital Experience They Crave