Asylum seekers ‘terrified and suicidal’ amid Covid outbreak at Napier 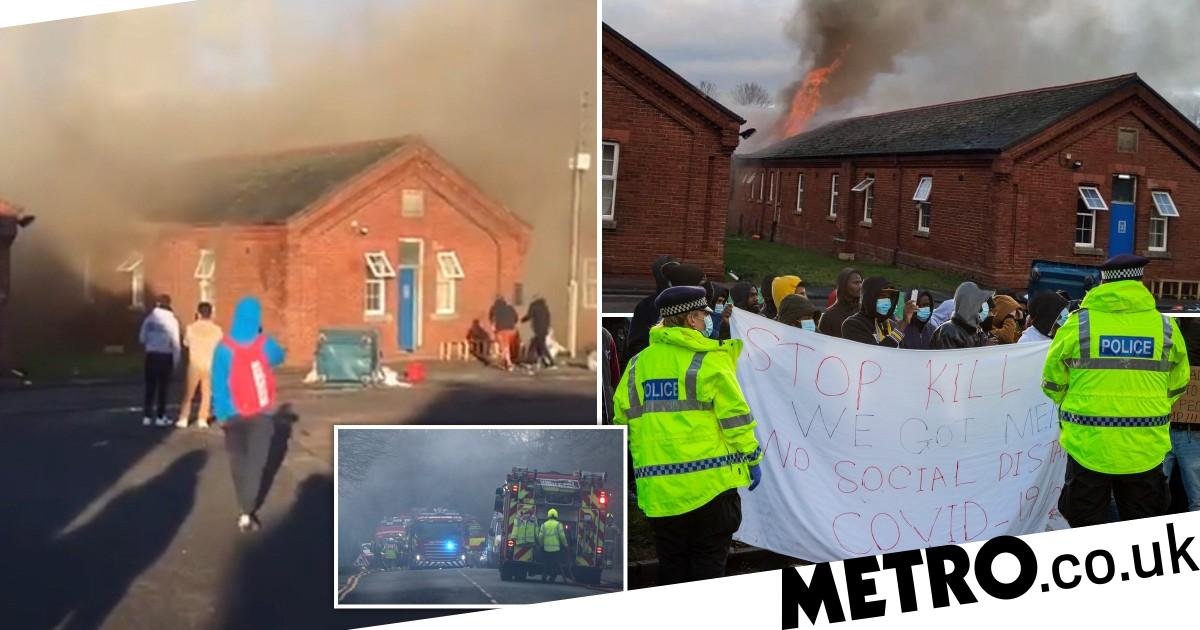 Asylum seekers were left ‘terrified in their beds’ amid squalid scenes as a Covid outbreak took hold at a converted military barracks, files show.

Dozens of residents at Napier camp in Kent who had tested positive were initially placed in a recreation area as the number of cases rapidly spiralled.

Two people later threatened suicide, with others feeling ‘angry’ and ‘dejected’ after being placed in the controversial temporary accommodation.

The minutes from a regional group of councils show how the site was considered ‘not fit for purpose’ and lacked cleaners and self-isolation facilities, with dormitories turned into ‘Covid wards’.

The ‘toxic’ environment at the camp is also recorded in the files from the South East Strategic Partnership for Migration released to Metro.co.uk under the Freedom of Information Act.

The former barracks in Folkestone, part of Shorncliffe Army Camp, was repurposed by the Home Office in September last year to house as many as 400 asylum seekers at a time.

The dormitory arrangements led to warnings from humanitarian groups and healthcare professionals about Covid outbreaks and the documents show how these predictions came true amid a lack of social distancing.

The files have been released amid concern at the welfare of those seeking better lives in the UK following 27 people drowning at sea yesterday.

Three children, 17 men and seven women – one of whom was pregnant – were among those who died when the inflatable dinghy they were travelling in capsized near Calais.

In January 2021, ‘service users’ who had tested positive at Napier were first moved to a recreation area with a TV and snooker table.

The mass outbreak was given Gold Command status, where Kent County Council (KCC) joins other agencies in responding to an emergency.

The minutes state: ‘Recreation room can take 30 so several dorms will have to be covid wards. This is a work in progress and will be going on all day.’

Despite the camp being subjected to Covid ‘household’ rules at the time, Kent Police issued several fixed penalty notices as people continually strayed off the site, the files show.

The minutes also reveal a lack of welfare services at the height of the outbreak, despite 381 people having been resident at the time.

On January 18, an update reads: ‘There are no counselling services available at the moment for Napier residents.’

Staff were forced to sleep three to a room, with a lack of social distancing throughout the accommodation, the documents show.

One person, who is not named, is described as ‘gobsmacked’ and to have ‘asked if Napier should be closed own’.

An update in the file – where most names have been redacted – says such a large-scale outbreak ‘was inevitable’. Despite the soaring number of cases, the files state that there were ‘no cleaners on site at the moment’.

Clear warnings were also given in notes for January 20 that the camp was unsuitable for use during the pandemic.

The update reads: ‘Site is not Covid safe and this is now understood.

‘There needs to be consideration of viability of site going forward.’

The following day, the minutes state: ‘Feeling on camp is tense. People are terrified in their beds.’

In total, 130 people had tested positive at this point.

Although some of the residents were moved out to hotels, others remained frustrated at being left behind in the makeshift accommodation and some refused to take Covid tests, apparently out of fear that it would hamper their onward relocation, according to the files.

On January 25, the notes read: ‘Psychological state of people still at Napier mentioned by [redacted]. Some services users are angry, dejected and have been there for a long time.’

An update on January 28 refers to ‘urgency on this as 2 people threatening suicide if they are not moved off site and [redacted] is taking this seriously’.

The note continues: ‘Also one person on suicide watch so a real risk.’

Although the outbreak was considered to have ended by January 29, disorder including a large fire then broke out as residents waiting for a move out of the barracks grew frustrated.

The notes read: ‘Minority of service users broke into canteen. Trashed it and threatened staff who had to get to safety. 3 fires were set and one in block 7 which was more or less destroyed.’

While relative calm was restored, grave doubts remained over the suitability of the site for housing asylum seekers in communal living arrangements.

The minutes state: ‘KCC disappointed that site will continue to be used and not fit for purpose. In context of Covid outbreak, there should be a review of the use of this site.

‘The tensions which caused the incident were about people not being moved out. Toxic environment with risks to residents and staff – and equally the draw on resources and emergency services.’

The minutes show that the Home Secretary was kept up to date with the developments at the barracks, including reports of asylum seekers leaving the ‘bubble’ during the Covid outbreak.

Ms Patel is recorded as being ‘very concerned to know that there is compliance and not putting wider community at risk’.

However after the disorder, the notes read: ‘Home Office ministers are determined to use the site and reinforced by Friday.

‘Lessons learned on what improvements can be made to make the site as safe as possible going forward.’

Eventually, the crisis at the camp was eased by moving people out into hotels, which reduced the number of those present to 227 by early February.

In June, a High Court judge found that the accommodation, which has been loaned to the Home Office by Ministry of Defence, fell short of minimum standards. However, around 270 people are said to be there at present, with the site reportedly set to be used until at least 2025.

‘It’s high time Ministers found some compassion in how they treat people seeking asylum, many of whom have fled violence, persecution and torture.

‘Napier barracks and all other camp-style accommodation must be shut down. Refugees should be housed in our communities, close to the cultural, health and legal support they desperately need.’

The government maintains that Napier is part of its ‘legal duty to house destitute asylum seekers and ensure their safety and wellbeing’.

A Home Office spokesperson said: ‘We take the wellbeing of those in our care extremely seriously.

‘We have made significant improvements to the Napier site in the past year and continue to do so, including indoor recreational space and outdoor activities, an effective Covid-19 management programme and transport to the local town.

‘Our new Nationality and Borders Bill will create an immigration system that is fair but firm and fix our broken asylum system.’

Travel news: When will Australia and New Zealand reopen their borders?