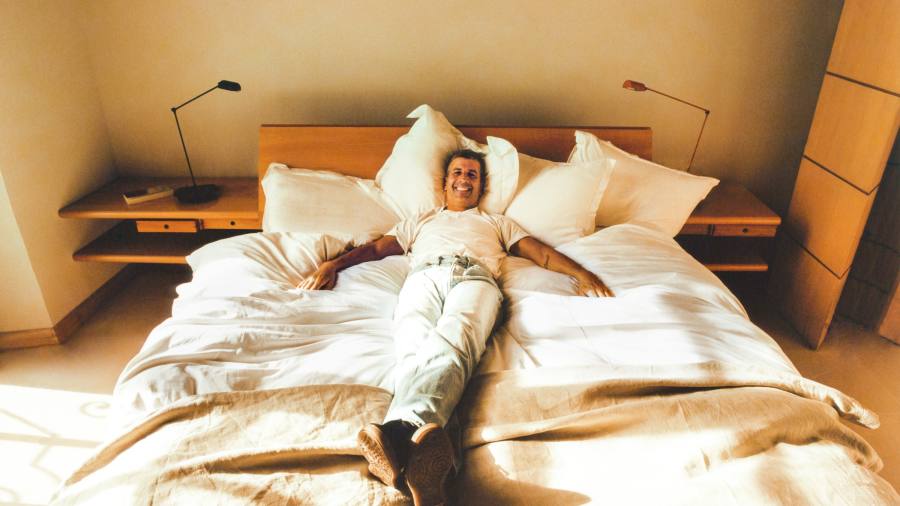 For almost a decade André Saraiva has lived by one rule: never work before 1pm. The 51-year-old artist, hotelier and entrepreneur typically spends the mornings relaxing in his Le Marais apartment overlooking the Place des Vosges, the oldest planned square in Paris, known for its perfectly symmetrical shape, vaulted stone arcades and Louis XIII-style architecture.

Given the grand exterior, most of his guests are surprised as they climb the spiral staircase and enter the small, modest front door of his home only to find a loft-like space. It’s simplistic and distinctly postmodern, with an airy feel that has been created by a series of six French doors and white walls that soar to a two-storey height. “Stepping inside feels a bit like opening a magical box,” says Saraiva as he walks me through his home. “Traditionally, most older apartments in Paris have a series of smaller rooms and corridors but when I moved here in 2020 after living for 10 years in New York [he continues to split his time between Paris, New York and Lisbon], where even the bathroom had no doors, I had come to really enjoy living in a big, open space and I wanted that same feeling here.”

Born in Uppsala, Sweden, to Portuguese parents in 1971, the artist moved to Paris aged 10 and started graffiti at 13. He is known to many as Mr A or André: he invented his signature tag in 1989, a top-hatted animation that has since become his trademark – he’s painted it more than 300,000 times. His first solo show was in Paris in 1990, and he has since been exhibited at the Museum of Contemporary Art in Los Angeles, Parco Museum Tokyo, and The Hole gallery in New York. He is also the owner and operator of several exclusive nightclubs in Paris and a co-owner of the Amour Hotels in Paris and Nice. Added to that are the nightclubs, bars and restaurants he’s created in New York, Tokyo, Shanghai and LA.

Saraiva left New York in the wake of the pandemic, and was initially convinced that his return to Paris would be brief. But a few months on, when returning to the United States seemed impossible for the foreseeable future, he began searching for a permanent place. “I didn’t want to move back in with my mom,” he says.

One of the most eye-catching elements of his new home is a bright yellow lacquered box with wood ceilings, around 4m high and wide. A vibrant standalone kitchen, it was created as a room within a room by the architect Emanuela Frattini Magnusson, who remodelled the apartment as a second home for a private client in the late 1980s. Shortly after Saraiva moved in, he was visited by his friend Willo Perron, the French-Canadian creative director and designer whose list of clients includes Drake, Rihanna and American fashion brand Stüssy. A few days later, Perron sent Saraiva a few photographs on Instagram along with the message: “Isn’t this your apartment?” Saraiva instantly recognised his yellow kitchen, which had been photographed for the book Designing with Wood by Carol Soucek King in 1995. He was so taken with the aesthetic throughout, he set out to recreate the interiors.

“Luckily, some of the furniture had been left here when I moved in and then I began searching on eBay and through auctions for other pieces from the photos,” says Saraiva. He stumbled upon one of the rarer designs – a custom-made wooden shelving unit by Italian architect Gianfranco Frattini (Emanuela Frattini Magnusson’s father), inspired by his famous Kyoto coffee table – at the Parisian auction house Hôtel Drouot. When the courier came by to deliver it, he was told that this was the same address where he had picked it up several years prior. It now stands exactly where it was, dividing the living room and the dining area, which has a big granite table surrounded by black leather and chrome dining chairs by Marcel Breuer – both identical to the ones that can be seen in the original photography.

It would be almost impossible today to get permission to turn a 17th-century Paris apartment into a loft, says Saraiva. It was in fact the late British architect Richard Rogers – one of the designers of the city’s Centre Pompidou and a former owner of the flat – who knocked down most of the old walls to create the open layout during the 1970s. The only partitions that remain segregate the living room at one end of the space and the bedroom at the other. Tucked in between is a small office with a wooden ladder used to climb a bookcase that stretches from the doorway, across the space, and up to the ceiling, while two retractable wooden doors close off the office from the rest of the apartment.

The office space was custom-made by Parisian woodworkers, who also handcrafted the bedroom’s walk-in closet and sculptural lamp. “I love the fact that almost every single element of the apartment has been specially made,” says Saraiva as we enter the bedroom closet, pointing out the drawers where the detailing extends to cut-out handles and hand-carved joints. “The woodwork is probably one of the things I appreciate the most.”

The wooden shelving in the living room is a showcase for pieces from Saraiva’s vast collection of art and design, which includes his own works and memorabilia – among them an old, empty spray can. Also in the mix is a chalk drawing by his idol Keith Haring, originally made for the New York City subway, a large nude photo of Vivienne Westwood by Juergen Teller, and a selection of smaller pieces. “I like to surround myself with things I have a personal connection to – it feels comfortable and brings back memories,” he says. “The only person represented here that I haven’t met is Keith Haring – but he was perhaps the artist who inspired me the most.”

Asked what he looks for in a purchase, Saraiva shrugs: “I wouldn’t call myself a collector.” But he does enjoy the hunt for vintage designs and owning a few pieces that would probably attract the envy of declared collectors – including an original kitchen module by Le Corbusier and a 1950s Jean Prouvé school bench. “I guess it’s become a bit of a game for me, but for this apartment I liked the idea of showing respect to the people who put so much attention into the details.”

While Saraiva has settled in Paris, he leads a transient life. He has a second home in Lisbon, where he likes to surf in the summer, and is in the process of building a second atelier. He feels a special connection to Portugal – his parents fled the country in the 1970s to escape the Salazar dictatorship. They reunited in Paris before seeking asylum in Sweden where Saraiva was born. “My mom has always told me that I was conceived in Paris but born in Sweden,” he says. 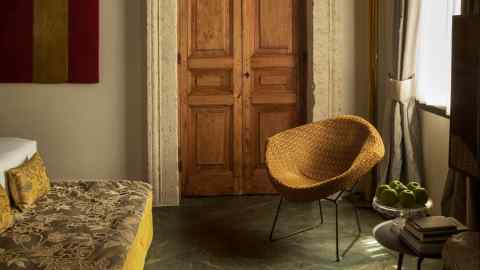 He now has a French and a Swedish passport, after the family moved back to Paris when he was 10, where he attended high school in Le Marais – in what was a working-class neighbourhood in the 1980s. It was there he got into graffiti, later hosting parties at nightclubs and finally breaking into the art scene. Although much has changed in this culture-defining district, which is now home to hip boutiques and art galleries, Saraiva is still able to recognise parts of his old, gritty neighbourhood. “In a city like New York, you can leave and come back a year later, and your old neighbourhood might be completely unrecognisable,” he says. “Here, maybe a store has closed and another has opened but it feels the same. When I walk in the Marais, I still see all my old hangouts and run into friends from back in the day. Moving back here really felt like coming home.”

Saraiva has a penchant for nostalgia. As a teenager he would go to Place des Vosges after school to hang out and smoke cigarettes. There he would look up at the ornamented façades of red brick and stone and say to himself: “One day, I will live in one of those apartments.” C’est la vie.