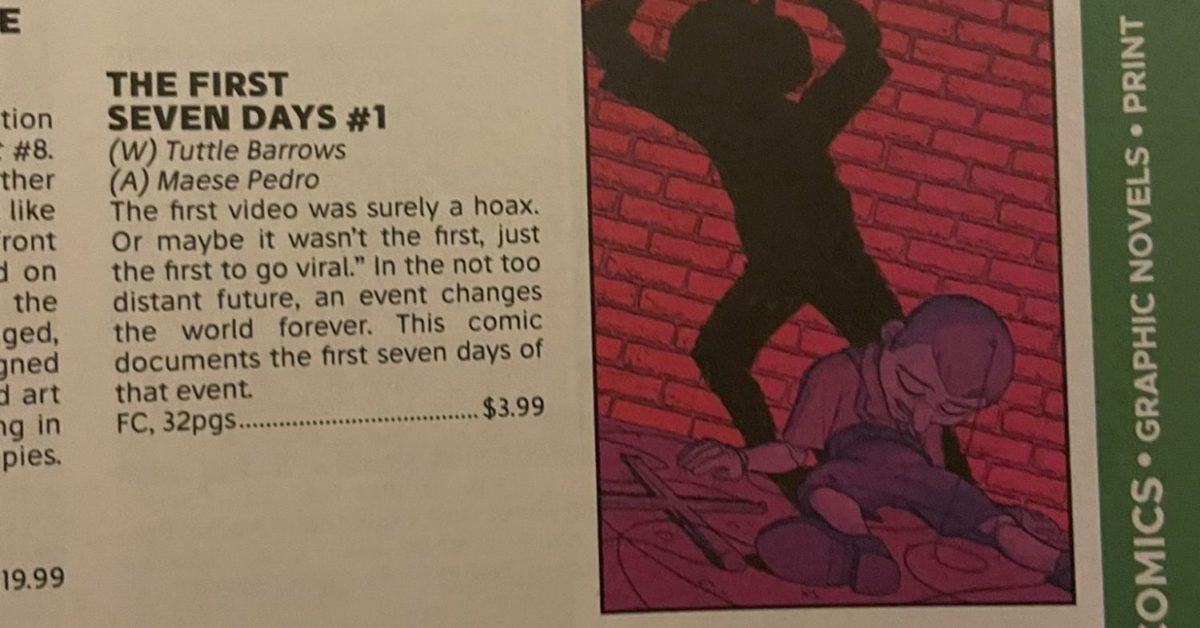 Bad Idea Comics is a relatively new comics publisher from Dinesh Shamdasani, Atom Freeman, Joshua Johns, Karl Bollers, and Anthony Militano. A direct-to-retailer publisher, eschewing digital and trade paperbacks in favour of one-cover one-per-person comic book sales from big comic book names. Partly this included not going through comic book distributors (except in the UK) and going direct to a select 200-plus list of comic book stores. Previously they have sneaked comic books into comic shops, first with Hero Trade by Matt Kindt and David Lapham, and then with a comic book preview inside the Diamond Previews catalogue itself. And now it seems, in that catalogue, there was a hidden Bad Idea comic book. The First Seven Days #1 from B-Side Press, as seen below, and published today.

First Seven Days #1
(W) Tuttle Barrows (A) Maese Pedro
The first video was surely a hoax. Or maybe it wasn’t the first, just the first to go viral.” In the not too distant future, an event changes the world forever. This comic documents the first seven days of that event.
32pgs, FC SRP: $3.99

Here’s the book as it appears on the stands today.

And here’s what you find if you open the pages.

The listing has now been deleted from Previewsworld, but the comic book is now in stores who ordered it. Some got the clues, B-Sides are what Bad Idea Comics calls the back-up stories in a number of comic books they have published. and those who bet heavily have prospered, with copies have sold on eBay for up to $140. But it may be worth notinh that Midtown Comics seems to know what’s what, restricting it to one copy per person, but selling them for cover price. Still, they might as well be giving away hundred dollar bills, one per person…

It also comes with the following letter.

More precisely, you’ve found one of the very rare BAD IDEA Secret Six comics. This book is one of a series of six comics snuck out into the world in sneaky and duplicitous ways. Each masquerading as something other than BAD IDEA…

It all began with THE HERO TRADE. Technically the first comic published by BAD IDEA and the first of the BAD IDEA Secret Six. We sent one copy to each of our 154 BAD IDEA Destination Stores in unmarked manila envelopes, back in late 2020. The short, black and white comic by Matt Kindt and David Lapham contained no credits, featured a company logo for Buttoned Up Comics — we were super into buttons back then. It was a whole thing — and was printed on a rough, almost cheap-feeling paper.

Each copy was accompanied by a letter that, while truthful, gave the store the impression that the comic was a fan made work probably put together by a customer.

“I am sending you one copy of my first self-published comic,” it read.

“I’d love it if you could put it on your shelf and sell it,” and it’s true, we would have!

“Please don’t throw it away,” but, of course many of them did despite the fact that we bolded and underlined that part.

When we finally announced what we had done, people lost their minds. Overnight prices for the copies that remained climbed into the hundreds of dollars. Every BAD IDEA Destination Store was besieged with phone calls from fans looking for a copy. Fights broke out in stores. Someone was literally taken to jail over a copy! It was all too much for some stores. Several disconnected their phones for the day. Others decided to raffle their copy away. One store ripped theirs apart and laminated every page so everyone who came in could read it. Eventually copies made it to eBay and by the end of the week the book was selling for thousands. There it remains, despite being reprinted. Much sought after, oft-coveted, occasionally flaunted and all this without even talking about the movie.

That brings us to the book you hold in your hand. The most important comic (about puppets) since Fantastic Four (#8). THE FIRST SEVEN DAYS was not disseminated in our usual, though rather unusual-for-comics, self-distributed manner. Instead it was solicited and distributed traditionally by Diamond Comics, as comic books have been for decades. We slipped a cryptic solicitation into Diamond Previews Catalog #408 under the guise of a new publisher called B-Side Press. Fake creator credits, a sparse synopsis and a bizarre cover were all stores and fans had to solve the secret. To give everyone a fighting chance though, we also included a pretty incredible story by Mark Waid and David Lapham in the same catalog, ensuring every BAD IDEA fan and every comic shop in the world would pay special attention to issue #408. Grab a copy and check it out!

Now you’re all caught up. It’s time to enjoy a trip into the peculiar, puppet-filled world of THE FIRST SEVEN DAYS. But stay vigilant. Keep a lookout. You’ve discovered one of the BAD IDEA Secret Six. Perhaps two if you were lucky enough to secure a copy of THE HERO TRADE. But there are four more still to come. Or are they out there already? We can’t say. What we can tell you is that each of the BAD IDEA Secret Six will arrive in a completely different way. Each will be found in a place comic books are often found. Each will be more than they seem. And each could be anything…except BAD IDEA.

As for the comic book itself? It’s a story by Joshua Dysart and Kano about a world in which all puppets and toys come to life, and the first seven days of the world’s reaction to it. It’s Eight Billion Genies meets Toy Story and it doesn’t reflect well on us as a species… what will the other four be?

what you need to know

How to Get Healthy Gums- 7 Essential Tips to Follow