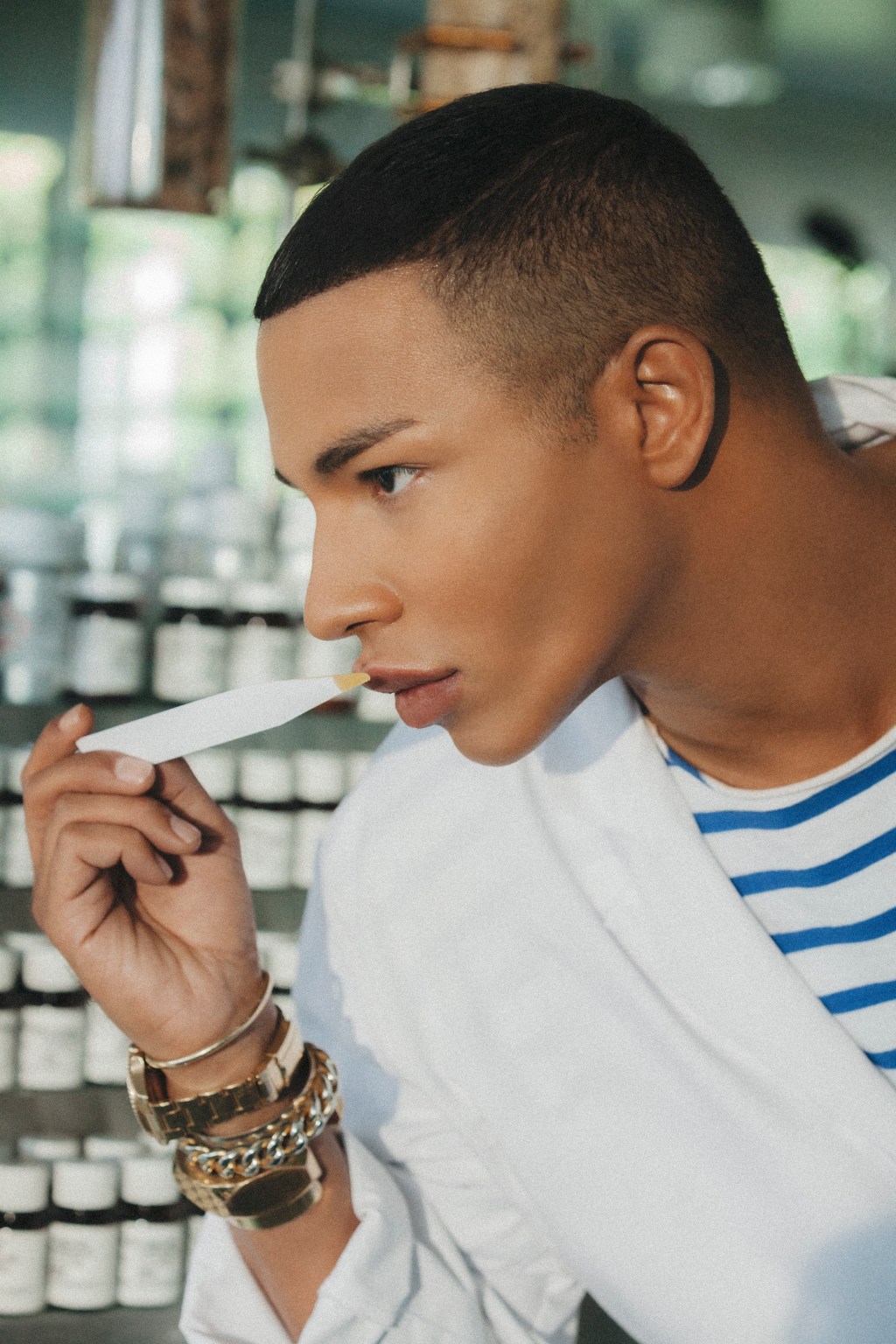 PARIS — “I’m obsessed with beauty. It’s almost like an extension of myself,” said Olivier Rousteing, whose office at Balmain is strewn with scented candles and whose bathroom at home is well-stocked with makeup, Tom Ford’s Black Orchid scent and Chanel No.22 perfume.

No wonder he’s so excited about Balmain’s new beauty license with the Estée Lauder Cos. Inc.

Rousteing is getting some immersive training at a famous Paris perfumery school, and is plotting an approach to cosmetics that will offer protection and nourishment, as much as color and glamour.

“I feel like everyone’s wearing a lot of makeup, but I think it’s important to also take care of your skin,” he said. “I’m super proud to work with Estée Lauder because its products are of such high quality.”

The long-term, global licensing agreement for Balmain Beauty includes collaboratively developing, producing and distributing luxury beauty products, the first of which for the line are expected to be launched in the fall of 2024.

“We’ve been talking to them for almost a year. It’s been a very natural conversation between the two companies,” said Jesel, whose newly expanded position is president, global brands, Tom Ford Beauty, Balmain Beauty and luxury business development, effective immediately.

He noted that Balmain and the Estée Lauder Cos. Inc. were created almost simultaneously, in 1945 and 1946, respectively.

“We shared a common interest between staying true to our heritage [and] at the same time seeing into the future,” Jesel explained. “We very quickly realized that…we were on the same wavelength with our vision of luxury, as well as our vision for brand-building with a long-term view.”

Both companies were rooted in heritage, “but we were also not letting it be an anchor,” he continued. “We were free to connect the past with the present, and also the future.”

Rousteing made it clear he plans to draw on the beauty legacy of founder Pierre Balmain, just as he frequently references the house heritage in fashion, most notably by reprising a Labyrinth monogram from the ‘70s and turning it into an entire fashion and accessories franchise under the 1945 moniker.

He noted that his grandmother religiously wore Ivoire de Balmain, created in 1979.

Other notable fragrances over the history of Balmain include Vent Vert, launched in 1947; Monsieur Balmain, introduced in 1964; Ambre Gris, from 2008, and Carbone, which hit the market in 2010.

Lauder executives and Rousteing opened a box together from the Balmain archives.

“When I look at the archives of Pierre Balmain, it’s incredible the diversity of fragrances that he created, each totally different from the other, but still a reflection of the house,” Rousteing said in a phone interview. “So I’m really excited about creating fragrances that might be completely different from all of them — with the fierceness and unique feeling and emotion of Balmain today.

“We’re going to try to express what is the DNA of Balmain in beauty…but with the modernity that speaks to my generation and future generations,” he added.

“We want to continue to draw upon this very authentic heritage of the Balmain brand, but also be true to the vision of Olivier Rousteing, who brought a modern view to the Balmain brand, a modern view of luxury,” Jesel said during a Zoom call. He added that vision is through a prism that is both Parisian and global, inclusive and with a “fearless confidence.”

“We look at luxury as a segment that has been growing ahead of the market and that has very strong growth perspectives around the world,” said Jesel. “Luxury is a dimension that we were seeking to augment, and that is a strategic step that is really important.”

He said that in Lauder’s luxury portfolio, Balmain “does add a different tonality in the sense that this is a French brand.”

The Balmain beauty business has been mostly dormant since 2017, when the French house and Interparfums SA mutually agreed to an early termination of their licensing agreement, initially signed for 12 years, starting from January 2012. The Balmain Hair Couture brand is run separately.

This gives something of a clean slate for Balmain and Estée Lauder.

“We will be working with [Olivier] directly, very closely,” said Jesel, explaining this could be on anything from product development to the creative and design processes.

Rousteing cited three values of Balmain he plans to instill in future beauty products for the house. First and foremost is diversity.

“Talking to every skin tone of the world is something really important for me,” he stressed.

Jesel recalled Rousteing as saying: “I want to represent all the beauties of the world — no exceptions.”

Another is the couture roots of Balmain, which Rousteing upholds by creating exceptional, one-of-a-kind dresses that retail in the five figures. For fragrances, he envisions sourcing rare flowers that convey the same “sense of uniquness” of a couture dress.

Lastly, Rousteing said sustainability and mostly natural ingredients will be another priority in the beauty products.

“We are very much aligned in our relationship — that we want to look into the future of luxury, and with Balmain Beauty, we are committed to continue advocating for those values,” said Jesel.

To be sure, Rousteing has been an enthusiastic user of fragrances since he was a teenager. He expressed his early passion for Jean Paul Gaultier’s groundbreaking Le Male fragrance last July, when he did a one-off collection for the couture house, transposing the bottle design and packaging into high fashions.

But today, Rousteing does not believe in assigning any gender to any fragrance. “A smell is for everyone,” he shrugged.

So far from his scent studies, he’s learned that people can cull ideas for fragrances from music or colors — and he relates to both intensely.

Rousteing also wears makeup, and it took on more importance following a fireplace explosion two years ago that burnt and scarred his face and torso. He explained that he relied on a host of pharmaceutical products for his rehabilitation and on makeup to hide disfigurements.

Consequently, “I’m really thinking of makeup as protection and not just to be beautiful,” Rousteing said. “It should help make your skin better.”

The designer said he’s long been “obsessed” by the beauty looks in iconic campaigns by Guy Bourdin, by Tom Ford in the early 2000s, not forgetting the videos of Beyoncé and the contouring made popular by his friend Kim Kardashian.

DR Congo to hold next presidential polls in December 2023

Nationals announce they will oppose Indigenous Voice to…