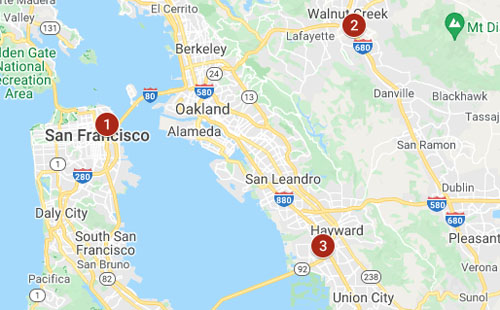 Several Bay Area stores have been the targets of groups of robbers and smash-and-grab thieves since Nov. 19.

The points on the map above are keyed to the descriptions below. Click on a link for the full story.

2/ Nordstrom, Walnut Creek’s Broadway Plaza, Nov. 20. About 80 people were involved in the “organized” robbery, police said. Three were arrested, two of them from San Francisco and one from Oakland.

4/ Lululemon, Santana Row, San Jose, Nov. 21. The group of robbers reportedly included a man who had a gun in his waistband.

5/ TheRealReal, Palo Alto, Nov. 21. A guard sounded the alarm as more than two dozen people approached the store, and in the end nothing was stolen. Two people were arrested.

6/ Prime 356, Oakland, Nov. 22. More than 30 people ripped the security gate off its frame and stole much of the boutique’s merchandise,  its proprietors said.

Britney Spears praised for ‘stepping up for…