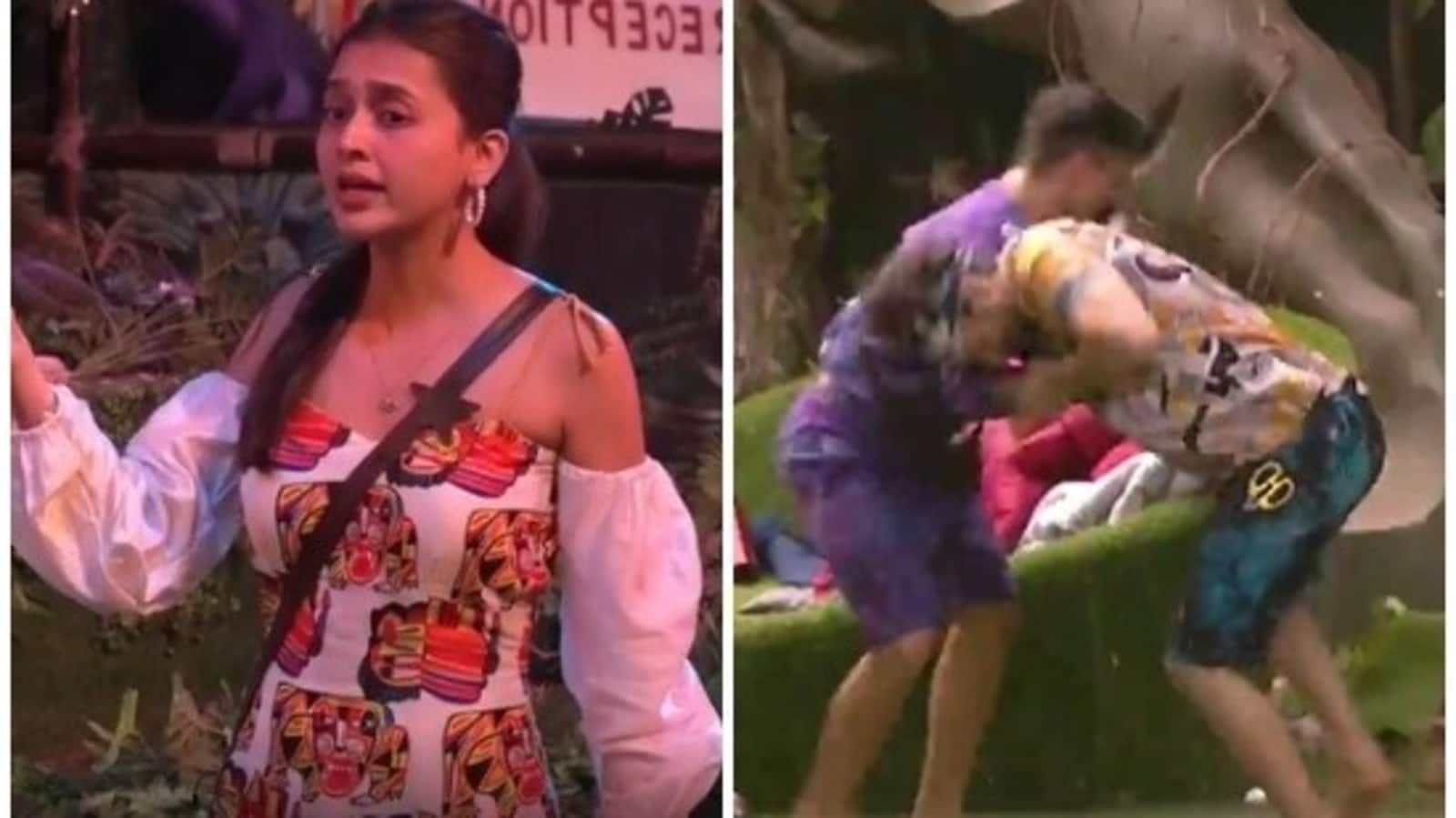 The show Bigg Boss is synonymous with fights and altercations, and this season was no different. Bigg Boss 15 witnessed some nasty arguments, which sometimes escalated to physical exchanges till Bigg Boss took matters in his own hands. The show made headlines through its course for disagreements involving Umar Riaz and Pratik Sehajpal, Shamita Shetty and Tejasswi Prakash, Devoleena Bhattacharjee and Abhijit Bichukale, and even loves-birds Karan Kundrra and Tejasswi.

Here are some of the biggest fights that Bigg Boss 15 viewers witnessed this season:

Earlier this month, Umar got physically violent with Pratik during a Ticket To Finale task. During the task, the contestants were asked to move players from the opposite team from their positions. Umar pushed Pratik with all his might, knocking him down on the floor. This is when Bigg Boss intervened with a strong warning, calling out Umar with for his inappropriate behaviour: “There are strict rules regarding physical violence in the Bigg Boss house,” he said. Later, it was revealed that Umar has been evicted from the show following the episode.

In the week leading up to the show’s finale, Tejasswi age-shamed co-contestant Shamita Shetty by referring to her as ‘an aunty’. During a task on the show, Shamita gave Tejasswi’s boyfriend Karan Kundrra a massage, prompting Tejasswi to comment: “Before this, you never took your task so seriously.” When Shamita yelled at Karan in response, Tejasswi added: “Lo aunty chadh gayi us pe bhi (Aunty is after him as well).” Shamita hit back saying, “It’s a task and you have no business calling me an aunty.” Tejasswi has been criticised by celebs such as Bipasha Basu and former Bigg Boss winner Gauahar Khan for her words.

When Tejasswi said she was ‘done’ with Karan

Tejasswi and Karan’s romance has been one of the focal points of Bigg Boss 15, and so have been their fights. Tejasswi lost her cool at Karan as he and Umar Riaz named Shamita the winner of a task against Pratik. After being told off by Tejasswi, an angry Karan responded with a bunch of rude comments: “Apne gireban me jhanko (look into yourself first).” Tejasswi yelled back saying: “Have the fu***** ba**s to stand and finish a conversation.” Karan said in response: “Chal ae apni shakal dekh (Go and see your own face).” Later, Tejasswi broke down in front of Pratik and Nishant Bhat. “Who talks to their girlfriend like that? I’m fu***** done,” she said.

Abhijit was once pulled up by Devoleena for repeatedly asking her to kiss him. When she called him out, he pretended it all to be a joke. A furious Devoleena told him: “Line cross mat karo (Don’t cross the line),” adding: “Meri acchai ka agar tum fayda uthaoge to mujhse bura koi nahi hoga (If you try to take advantage of my good behaviour, it won’t turn out well).” Few days later, Devoleena was seen biting Abhijit during a task, when he picked up a stone in an attempt to hit her. Earlier, Abhijit attempted to hit Devoleena with a bottle as she said: “Ek number ka gandagi hai tu (You are disgusting).”

During a task, Pratik Sehajpal called out Karan for attacking an unaware Nishant Bhat. In retaliation, Karan charged towards Pratik and slammed his body against him, following which the two got into a physical fight. Karan also pinned down Pratik to the floor with a choke-slam of sorts. Later, Karan ‘open challenged’ Pratik to a fight, prompting this response from him: “Main sar phaad ke jaunga aapka, yaad rakhna (Remember, I’ll break your head before leaving).” After Umar’s eviction in January, several viewers of the show pointed out that while Umar was evicted for violence, not much action was taken against Karan.

Devoleena Bhattacharjee and Rashami Desai, who used to be buddies on the show, were part of a huge fight, courtesy A Ticket To Finale task mediated by Rakhi Sawant. Rashami lost her cool at Devoleena after Rakhi told her that Devoleena asked her not to hand over the ‘ticket’ to finale to Rashami. She charged forward to hit Devoleena and only stopped when Rajiv Adatia intervened. “You are a liar, you take advantage of others,” Rashami told Devoleena, who said: “How dare you touch me.”

Simba pushed Umar into the pool:

Simba Nagpal, during a fight with Umar, had pushed him into the pool in a fit of rage. During a spat, Simba dragged in Umar’s brother Asim Riaz into the conversation, which did not go well with Umar. As Umar called him names, Simba lost his temper and yelled: “Gaali kaise diya? (How could you abuse?).” He was seen pushing Umar into the pool while other contestants tried to restrain him. Later, Umar also alleged that Simba had called him a ‘terrorist’, which the latter denied.

Salman blasted Abhijit for being abusive:

Show host Salman Khan, who often pulls up contestants for crossing a line on the show, slammed Abhijit for being abusive. Salman told him he will personally ensure that he’s thrown out of the house if he continues to use foul language. Following this, Abhijit got defensive and wanted to talk back to Salman, who shut him up with a threat of sorts. “Tu bolega, main ghar mein aake tereko maar ke jaunga (If you speak, I will enter the house and beat you up),” he said. Abhijit, who was upset with Salman’s words, replied: “Bhaad mein gaya aapka show (To hell with your show)!” In an attempt to exit the show, Abhijit walked towards the gates.

Afsana Khan and Shamita also didn’t see eye to eye on Bigg Boss 15. In an escalated fight, Afsana had once said that no one would recognise Shamita when if she stepped out of the house, taking a dig at her celebrity status. Afsana even commented on her age, referring to her as ‘buddhi’. In a Weekend Ka Vaar episode, Salman reprimanded Afana for attacking Shamita and saying: “Shamita buddhi hai, ghar baithne ka time hai tera. Ghatiya aurat (Shamita is old and it’s time for her to sit at home. She is cheap).”

The Bigg Boss 15 finale is scheduled to take place over the weekend. Karan Kundrra, Nishant Bhat, Shamita Shetty, Pratik Sehajpal, Rashami Desai and Tejasswi Prakash have made it to the show’s finale.

Denial of responsibility! Pedfire is an automatic aggregator of the all world’s media. In each content, the hyperlink to the primary source is specified. All trademarks belong to their rightful owners, all materials to their authors. If you are the owner of the content and do not want us to publish your materials, please contact us by email – [email protected]. The content will be deleted within 24 hours.
bigg boss 15 controversiesbigg boss 15 fightsbigg boss 15 finaleKaran KundrraPratik Sehajpalrakhi sawantSalman KhanTejasswi Prakash
0
Share

Gal Gadot, Tom Bateman Starrer To Get A Theatrical Release In India On This Date