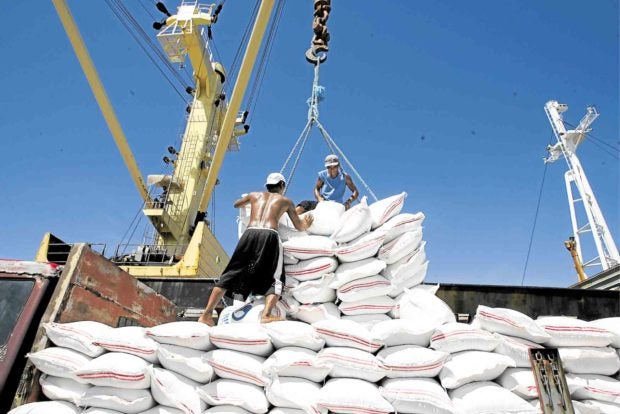 The country’s two biggest tax-collection agencies have been tasked with helping probe the alleged collusion between private rice importers and agriculture cooperatives that act as dummies to avoid payments of import duties slapped on the staple.

In a statement on Friday, the Department of Finance (DOF) said Secretary Carlos Dominguez III recently ordered Revenue Commissioner Caesar Dulay and Bureau of Customs chief Rey Leonardo Guerrero to assist the Department of Agriculture (DA) in its investigation of the said practice following the temporary suspension of sanitary and phytosanitary import clearance (SPSIC) issuance to farmers’ cooperatives and irrigators’ associations.

“There’s this question now as to why traders are using co-ops to import rice … Let’s look into that because they might be using the tax advantage on rice imports,” Dominguez told Dulay and Guerrero during a recent meeting.

Dominguez was the agriculture secretary during the administration of President Corazon Aquino.

“While cooperatives are not exempted from paying duties on rice imports, they can be exempted from paying income tax on these imports if they are registered with the BIR (Bureau of Internal Revenue) as tax-exempt entities,” Finance Undersecretary Antonette Tionko noted.

The DOF noted that Agriculture Secretary William Dar last month stopped issuing SPSICs for commercial purposes to farmers’ co-ops and irrigators “after the DA received reports that these organizations have resorted to rice importation rather than carry out their purpose of procuring local rice from farmers.”

“Both the DOF and DA have also received reports that the SPSICs issued to cooperatives have been misused by traders to avoid legal responsibilities and evade the payment of the correct amount of import ta­xes,” the DOF said.

In his report to Dominguez, Guerrero said the import duties collected from imported rice in October rose 24.9 percent to P630 million from P505 million a year ago as 10-month importation volume grew 17.5 percent to 98 million kilograms from 84 million kg last year.

As such, the end-October collections from rice tariffs amounted to P14.3 billion, exceeding the P10 billion needed to replenish the yearly rice competitiveness enhancement fund not only modernizing farms but also supporting the farmers reeling from liberalized rice trade.

Republic Act No. 11203 or the rice tariffication law, since last year slapped the following levy on imported rice: 35 percent, if from the Association of Southeast Asian Nations (Asean); 40 percent, if within the minimum access volume (MAV) of 350,000 metric tons and from countries outside Asean; and 180 percent, if above the MAV and coming from a non-Asean country.