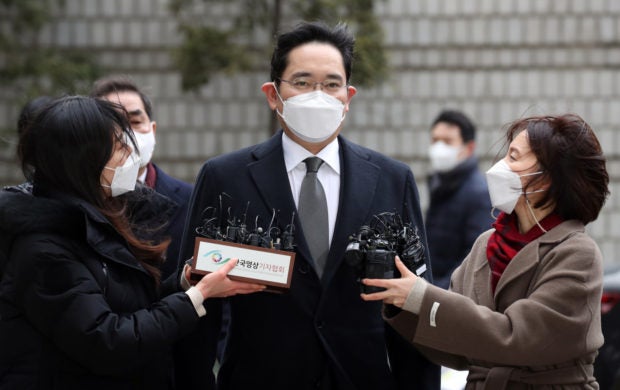 SEOUL — South Korea’s largest conglomerate, Samsung Group, is facing another watershed as chief Lee Jae-yong was once again taken into custody Monday after receiving a jail term for bribery and embezzlement.

The departure of Lee from the helm of the group comes at a time when the IT giant is seeking to make progress on its long-pending management succession and to press forward amid the post-coronavirus economic recovery.

“Lee should be held responsible for the suggested bribery and embezzlement charges,” the Seoul High Court said in its ruling, sentencing Lee to a jail term of two years and six months.

Following the verdict, Lee was immediately put under court detention, and is to be returned to the Seoul Detention Center, which he left in February 2018.

Apparently in shock over the stricter-than-expected sanctions, Samsung Group had not released a statement on the matter.

“The essence of this case is that the power abuse of former President Park Geun-hye has infringed upon the property rights of a company,” Lee’s lawyers told reporters, expressing regrets over the court’s decision.

When asked on whether or not Lee will make a final appeal, the lawyers refrained from answering, saying only that they will thoroughly review the written judgment.

Market observers said although each Samsung company has its own efficient and competent leadership team, Lee’s absence will have an impact on groupwide investment decisions such as corporate acquisitions.

Under Lee’s stewardship, Samsung has laid out a vision to take over the global No.1 position in the system-on-chip market by 2030, pledging investments of 13.3 trillion won.

“The latest ruling will create a management vacuum within Samsung Group, which will delay crucial business decisions and investments, and consequently deliver negative impact to the industry in general,” the Korea Enterprises Federation said in a statement.

“We request that (the government) give policy and administrative considerations in order to minimize the management setbacks in Samsung Group, as it has become vital to gain an upper hand in the post-coronavirus market through active business expansion and technology innovation.”

Prior to the court ruling, a number of business associations had expressed support for Lee, asking the court to give Lee and Samsung the opportunity to spearhead the nation’s economic rebound after the pandemic.

“We should give (Lee) the chance to contribute to the recovery of our economy,” said Korea Venture Business Association President Ahn Keon-joon upon filing a petition with the court last Wednesday.

His words were echoed by Korea Chamber of Commerce and Industry Chairman Park Yong-maan and Korea Federation of SMEs Chairman Kim Ki-mun.

Also, a number of online petitions have been made at Cheong Wa Dae’s website demanding that Lee be released, gaining more than 66,000 signatures as of 2 p.m. Monday. Another petition calling for stern punishment for Lee, on the other hand, had some 1,600 signatures.

The case of the Samsung Electronics vice chairman goes back to the former Park Geun-hye administration and the power-rigging scandal that led to Park’s impeachment in late 2016. The Samsung chief was charged with bribing Park’s former confidant, then known as Choi Soon-sil, to obtain the government’s help in securing control of Samsung Group.

He was initially sentenced to five years in prison in 2017, but was freed the following year after an appellate court reduced the term to 2 1/2 years, suspended for four years.

The case reached the Supreme Court but was returned to the appellate court in 2019 as the top court decided that some key bribery charges had been omitted. Samsung had also spent 3.4 billion won ($3.08 million) to purchase horses for Choi’s daughter and made a separate donation to a sports foundation, bringing the total amount to 8.6 billion won.

During the final hearing in late December, prosecutors demanded a nine-year term, down from the previous 12 years called for during the first and second trials.


Delivering his final statement, Lee expressed regrets and vowed to atone for his wrongdoings.

“I had to sit down with former President Park while I was in a difficult situation after my father suddenly collapsed. I will never repeat such an act again,” Lee said.

“I want to make a new Samsung that fits the country’s status, and repay my respected father.”

Following his father’s death in October, Lee was expected to be promoted to chairman after the retrial procedure wrapped up.