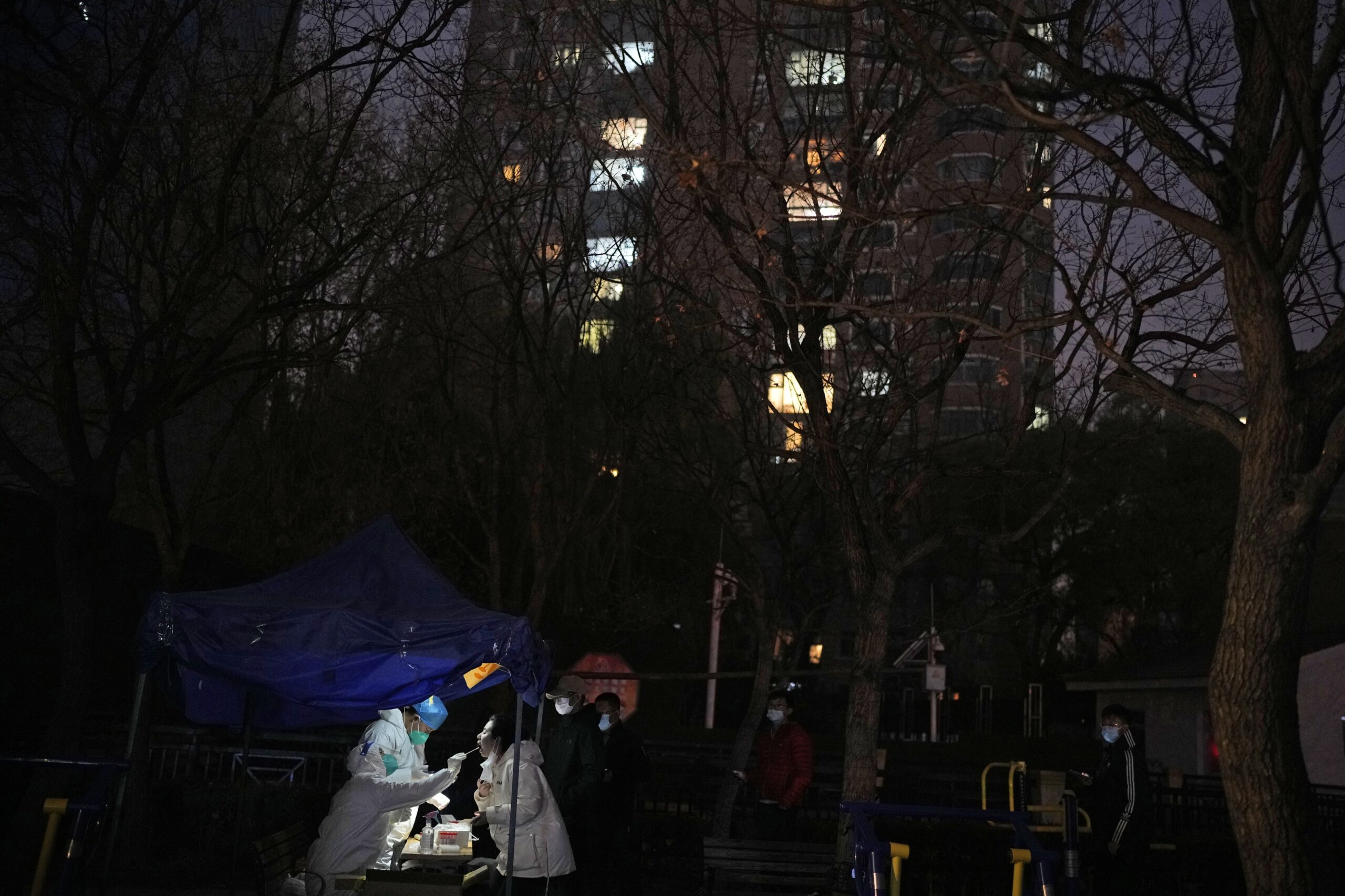 BEIJING (AP) — China on Sunday announced its first new death from COVID-19 in nearly half a year as strict new measures are imposed in Beijing and across the country to ward against new outbreaks.

The death of the 87-year-old Beijing man was the first reported by the National Health Commission since May 26, bringing the total death toll to 5,227. The previous death was reported in Shanghai, which underwent a major springtime surge in cases.

China on Sunday announced 24,215 new cases detected over the previous 24 hours, the vast majority of them asymptomatic.

While China has an overall vaccination rate of more than 92% having received at least one dose, that number is considerably lower among the elderly — particularly those over age 80 — where it falls to just 65%. The commission did not give details on the vaccination status of the latest deceased.

That vulnerability is considered one reason why China has mostly kept its borders closed and is sticking with its rigid “zero-COVID” policy that seeks to wipe out infections through lockdowns, quarantines, case tracing and mass testing, despite the impact on normal life and the economy and rising public anger at the authorities.

China says its tough approach has paid off in much lower numbers of cases and deaths than in other countries, such as the U.S.

With a population of 1.4 billion, China has officially reported just 286,197 cases since the virus was first detected in the central Chinese city of Wuhan in late 2019. That compares to 98.3 million cases and 1 million deaths for the U.S., with its population of 331.9 million, since the virus first appeared there in 2020.

China’s figures have come under question, however, based on the ruling Communist Party’s long-established reputation for manipulating statistics, the lack of outside scrutiny and a highly subjective criteria for determining cause of death.

Unlike in other countries, the deaths of patients who presented COVID-19 symptoms were often attributed to underlying conditions such as diabetes or heart disease, obscuring the real number of deaths from the virus and almost certainly leading to an undercount.

Critics pointed especially to this year’s outbreak in Shanghai. The city of more than 25 million only reported about two dozen coronavirus deaths despite an outbreak that spanned more than two months and infected hundreds of thousands of people in the world’s third-largest city.

China has also defied advice from the World Health Organization to adopt a more targeted prevention strategy. Beijing has resisted calls to cooperate fully with the investigation into the origin of the virus, angrily rejecting suggestions it may have leaked from a Wuhan lab, seeking to turn such accusations on the U.S. military instead.

In all cases, the party’s instinct to use total control — even using routine testing information to limit people’s movements — has won out, with only slight concessions made to criticisms aired on highly censored internet forums.

In response to the latest outrage, the central city of Zhengzhou said Sunday it will no longer require a negative COVID-19 test from infants under age 3 and other “special groups” seeking health care.

The announcement by the Zhengzhou city government came after a second child’s death was blamed on overzealous anti-virus enforcement. The 4-month-old girl died after suffering vomiting and diarrhea while in quarantine at a hotel in Zhengzhou.

Reports said it took her father 11 hours to get help after health care workers refused to provide assistance and she finally was sent to a hospital 100 kilometers (60 miles) away. Internet users expressed anger at “zero COVID” and demanded officials in Zhengzhou be punished for failing to help the public.

That follows an earlier outcry over a 3-year-old boy’s death from carbon monoxide poisoning in the northwest. His father blamed health workers in the city of Lanzhou, who he said tried to stop him from taking his son to a hospital.

Other cases include a pregnant woman who miscarried after she was refused entry to a hospital in the northwestern city of Xi’an and forced to sit outside in the cold for hours.

Clashes between authorities and residents fed up with restrictions have been reported in numerous cities despite tight controls on information. A new round of mass testing has been ordered in Huizhu district in the southern manufacturing hub of Guangzhou that has seen such frictions involving migrant workers shut out of their homes, the local government said on its official microblog Sunday.

Each such case brings promises from the party — most recently last week — that people in quarantine or who can’t show negative test results wouldn’t be blocked from getting emergency help.

Yet, the party has often found itself unable to rein in stringent and often unauthorized measures imposed by local officials who fear losing their jobs or facing prosecution if outbreaks occur in areas under their jurisdiction.

Nearly three years into the pandemic, while the rest of the world has largely opened up and the impact on the Chinese economy rises, Beijing has mostly kept its borders closed and discouraged travel even within the country.

In the capital Beijing, residents were told not to travel between city districts, and large numbers of restaurants, shops, malls, office buildings and apartment blocks have been closed or isolated. Local and international schools in urban districts of the city of 21 million have been moved online.