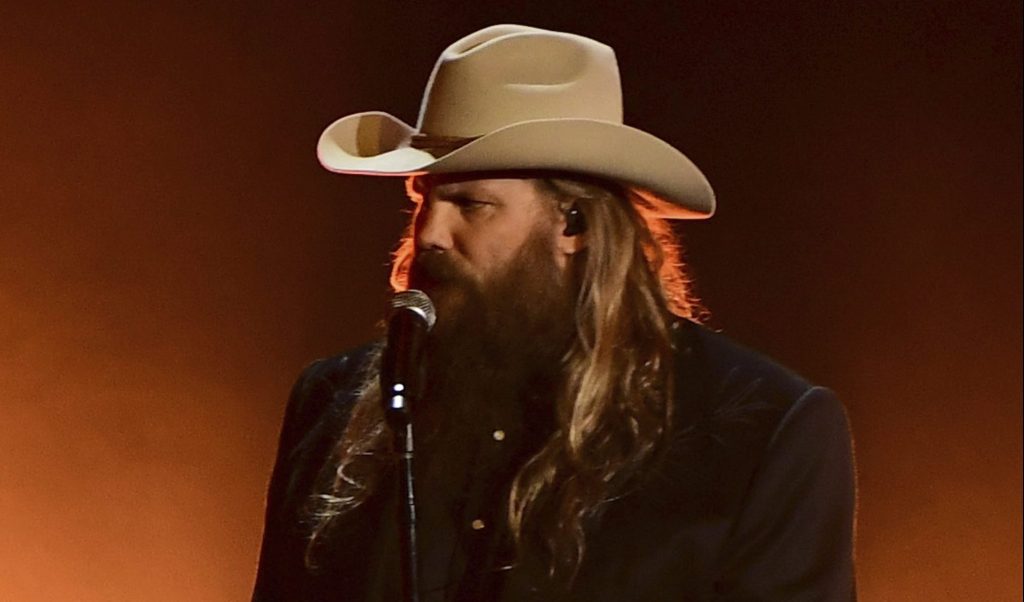 Chris Stapleton nearly swept the CMA Awards with six trophies in four categories Wednesday night, but the Country Music Association reserved its top prize for Luke Combs, who won entertainer of the year for the first time.

“(Presenter) Alan Jackson said my name twice just now,” marveled Combs, accepting entertainer of the year as the telecast slipped across the three-hour point. “i have never written a speech for something like this, which is not serving me very well right now…I don’t deserve to win it, but I’m sure as hell glad that I did.” Combs had premiered a brand new song earlier in the night, “Doin’ This.”

It was Combs’ second time at bat for entertainer of the year; last year he lost it to Eric Church.

The show had its winners largely falling along predictable lines — except for Combs’ entertainer win, which was a matter of some suspense, and Carly Pearce winning female vocalist for the first time — but the telecast took the road less taken with some of its socially conscious performance spots.

Despite missing out in the entertainer category, Stapleton otherwise swept the awards, winning honors for male vocalist as well as album, single and song, all for his “Starting Over” album and its title track. He was a double-winner in two of those categories for being a producer as well as artist and songwriter.

Along with Stapleton, several others were making repeat trips to the podium, like Old Dominion, picking up the band’s fourth win for group of the year, and Brothers Osborne, also getting a fourth trophy for vocal duo of the year.

But it wasn’t just business-as-usual all night for Brothers Osborne and others. Introducing the song “Younger Me,” singer TJ Osborne said it has been his dream growing up to be at the CMAs, but “there were so many hurdles for me. And I always truthfully felt like it would never be possible because of my sexuality. And I just wish, I wish, my younger me could see me now.” The song that followed was written by Osborne after he came out as gay early in 2021, still a rarity in the mainstream country realm.

Also making a statement was Mickey Guyton, who sang her recent album track “I Love My Hair,” joined in a trio by fellow Black artists Brittney Spencer and Madeline Edwards, who together ensured that country music was having one of its best hair days ever. “I Love My Hair” was introduced by Faith Fennidy, a Black student in Louisiana who was sent home from school after being told her braids violated school policy, an incident that inspired Guyton to write the song.

Black artists were featured throughout the three-hour ABC telecast, not least of all Jimmie Allen, who won best new artist, in a field that had been expected to see the win go either to him or Guyton.

Jennifer Hudson was a scene-stealer, bringing down the house by doing a medley of country or country-R&B crossover songs that Aretha Franklin had performed during her career, joined on guitar by the man of the night, Stapleton.

Stapleton’s win for album of the year for “Starting Over” came as a relief to some — but certainly not all — of the Nashville community. There had been some anticipation that Morgan Wallen might win the award for “Dangerous: The Double Album,” which would have led to some uncomfortable media scrutiny and questioning headlines, since Wallen had been barred from performing on or even attending the ceremony. The CMA board had decided that, due to the scandal over his being caught saying a racial slur, Wallen would not be eligible for any awards except for those that also included other nominees — in other words, he couldn’t compete for entertainer or male vocalist, but anything else was fair game.

The possibility that Wallen could have won was underscored by the huge fan cheers that greeted the mention of his name when album of the year nominees were being announced, sounding much louder in the feed from Bridgestone Arena than those for any other nominee.

SONG OF THE YEAR  Award goes to Songwriter(s)

FEMALE VOCALIST OF THE YEAR

MALE VOCALIST OF THE YEAR

MUSICAL EVENT OF THE YEAR

No proof of sabotage in Baldwin set shooting