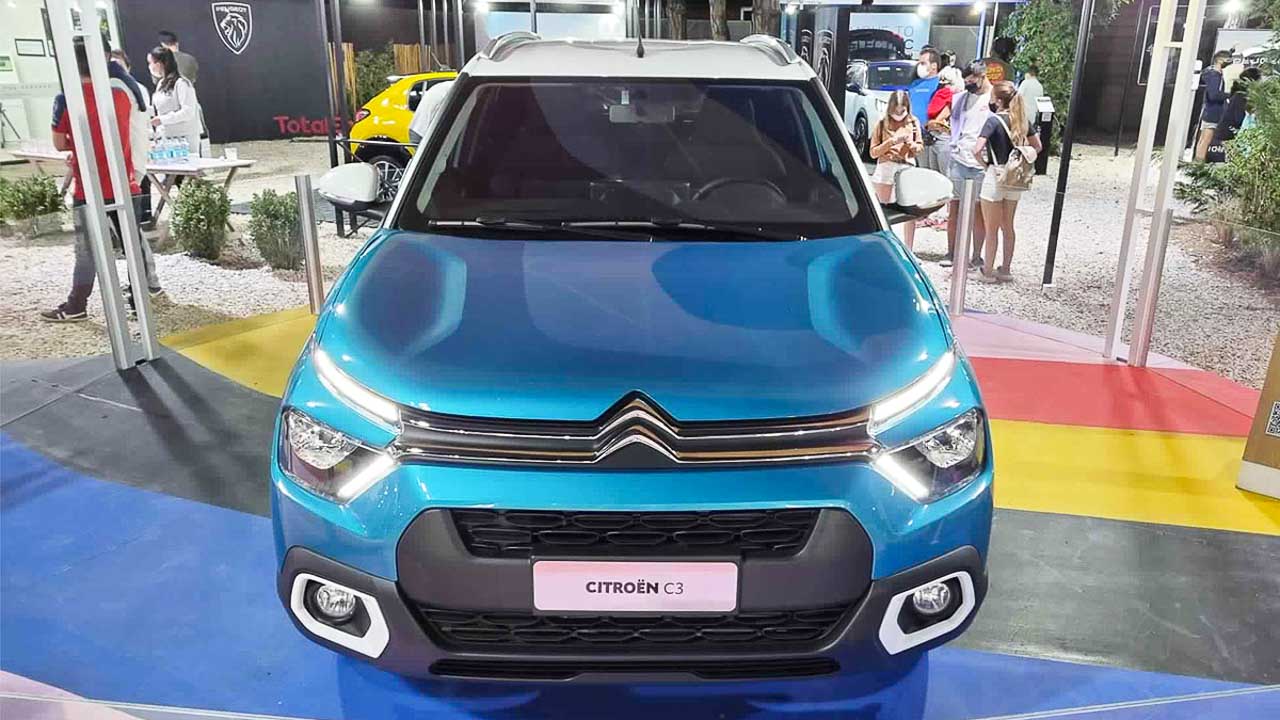 Citroen officially set foot in India last year with C5 Aircross. The premium mid-size SUV takes on other niche segment rivals such as Hyundai Tucson and Jeep Compass. A wholly-owned subsidiary brand for French car manufacturer Groupe PSA, Citroen is gearing up for launch of its second product in India.

In September 2021, Citroen globally unveiled the upcoming C3 which will soon make its debut in India. Internally codenamed CC21, this crossover has been spotted testing on Indian roads on several occasions previously. Ahead of its India launch, the new Citroen C3 has made its debut in Argentina, South America. Images are credit to 16valvulasarg.

During its official unveil, Citroen had clearly stayed away from calling C3 an SUV and instead referred to it as a hatchback. But they also said that it is inspired by an SUV. A high stance, body claddings, roof rails and large faux skid plates at front and rear bumpers further accentuate its SUV-like appearance.

Other exterior highlights include a pair of wraparound LED taillamps, a dual-tone paint scheme with a blacked-out roof, faux twin exhaust tips and 16-inch diamond-cut alloy wheels. Citroen logo with double arrowheads take centre stage on the tailgate. Front end of the rugged-style cross-hatch will be beefy with a muscular front bumper and split LED lighting setup.

Interiors of the cabin of C3 will be neat and minimalist but will be loaded with plenty of creature comforts for occupants. The dashboard will be colour coded with respect to door pillars and roof.

C3 is likely to be powered by a 1.2- litre turbo petrol engine which is expected to be paired with a 5-speed manual gearbox as standard. This powertrain is rated to deliver an output of 118 bhp and 150 Nm of peak torque. This engine is also said to be equipped with a flexi fuel system which means it can run on blended fuels- petrol or ethanol or both.

Unlike C5 Aircross, Citroen C3 will be a locally developed and manufactured product that will be underpinned by a heavily localised Common Modular Platform (CMP). High levels of localisation around 90-95 percent will ensure competitive pricing.

Upon launch, C3 will be a perfect rival to micro UVs such Tata Punch, Mahindra KUV100, Maruti Ignis as well as subcompact crossovers like Nissan Magnite and Renault Kiger. It is expected to be priced in the Rs 5 lakh to Rs 10 lakh range. In this segment, it could also rival the likes of Maruti Swift and Hyundai i10 NIOS.

This is the 2022 Ford Bronco Raptor

MS Dhoni Races Against Train in This Latest Ad Released on…