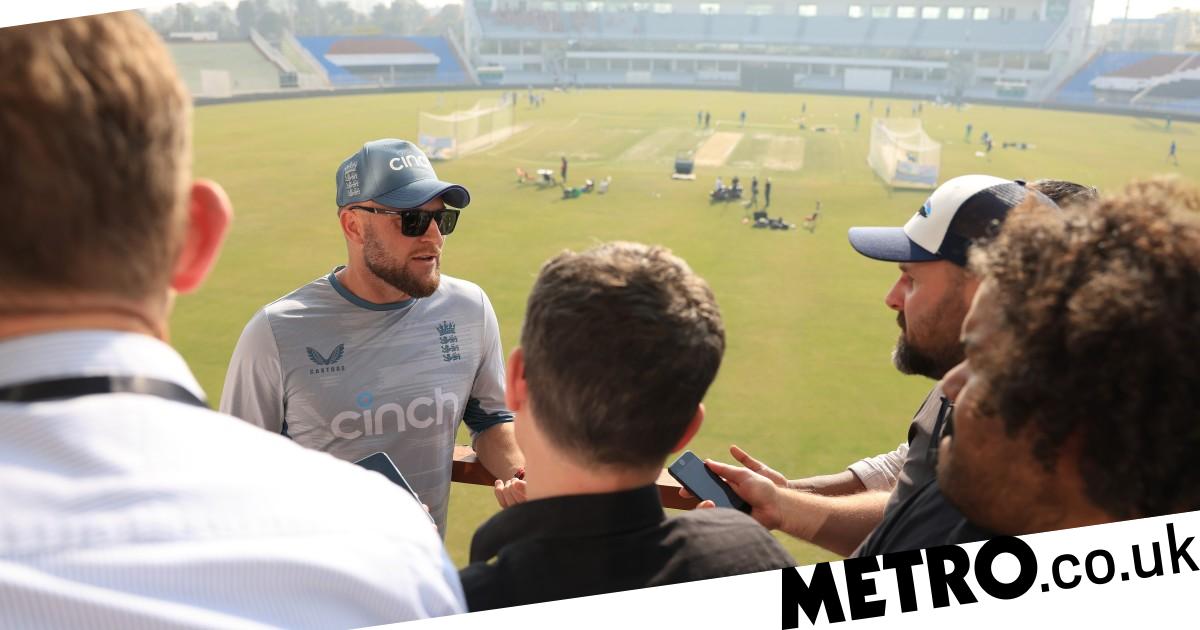 Brendon McCullum has pledged England will continue to make playing entertaining cricket their priority in Pakistan.

England are due to start their first Test on Pakistani soil since 2005 on Thursday, having played seven T20 internationals there during September and October.

An impressive summer saw England reborn after a dismal run of form, winning six out of seven Tests under the new leadership of captain Ben Stokes and McCullum.

Head coach McCullum is again keen to avoid drawn matches in this series, saying: ‘We are looking forward to coming over here and playing an entertaining style of cricket which hopefully ends up in results, whether that’s in our favour or in Pakistan’s favour.

‘Hopefully everyone that does dial into this series, not just in Pakistan but around the world, sees that international cricket is back in Pakistan and we’ve got a product that’s worth watching.’

England are the second of the major cricketing nations to embark on a Test tour of Pakistan after a long absence on security grounds, following Australia’s visit in the spring when the first two Tests ended in high-scoring draws before the tourists won the final game.

McCullum added: ‘This is obviously a great place to tour and it’s been starved of international cricket for a long period of time. We understand how passionate people are here in Pakistan about this form of cricket and we understand the obligation that we have as an England side.’

The tourists are scheduled to face Pakistan in three Tests, with matches in Multan and Karachi following the opener in Rawalpindi.

Of the existing squad, only the evergreen James Anderson was there when England last played Tests and ODIs in Pakistan 17 years ago – featuring in the white-ball matches.

While the tour may be something of a journey into the unknown for many of the touring party, McCullum insisted the side were excited by the prospect of playing at a stadium where England have never contested a Test match.

‘The boys have already said they’re pretty excited about playing in front of a full house here, it’s going to be a good atmosphere, so they’re really excited,’ he added.

‘That’s what we want from red-ball cricket all around the world is stadiums packed out and fans getting behind their local team.

‘The skipper wants them to be rock stars and to be a rock star you’ve got to play in front of the big houses. We’ve got that opportunity to do that.’

McCullum confirmed Mark Wood, who sustained a hip injury during England’s triumphant T20 World Cup campaign in Australia, will not be available for the first Test, although he hopes to have the fast bowler available for the second Test in Multan.

■ £42,000 – Estimated figure England captain Ben Stokes will raise for Pakistani flood relief charities after revealing he will donate his match fees for the three-Test series.

At least 1,600 people were killed and millions left in need of aid after devastating floods hit the region earlier this year.

Stokes wrote on social media: ‘The game has given me a lot in my life and I feel it’s only right to give something back that goes far beyond cricket. Hopefully this donation can go towards the rebuilding areas of Pakistan most affected.’