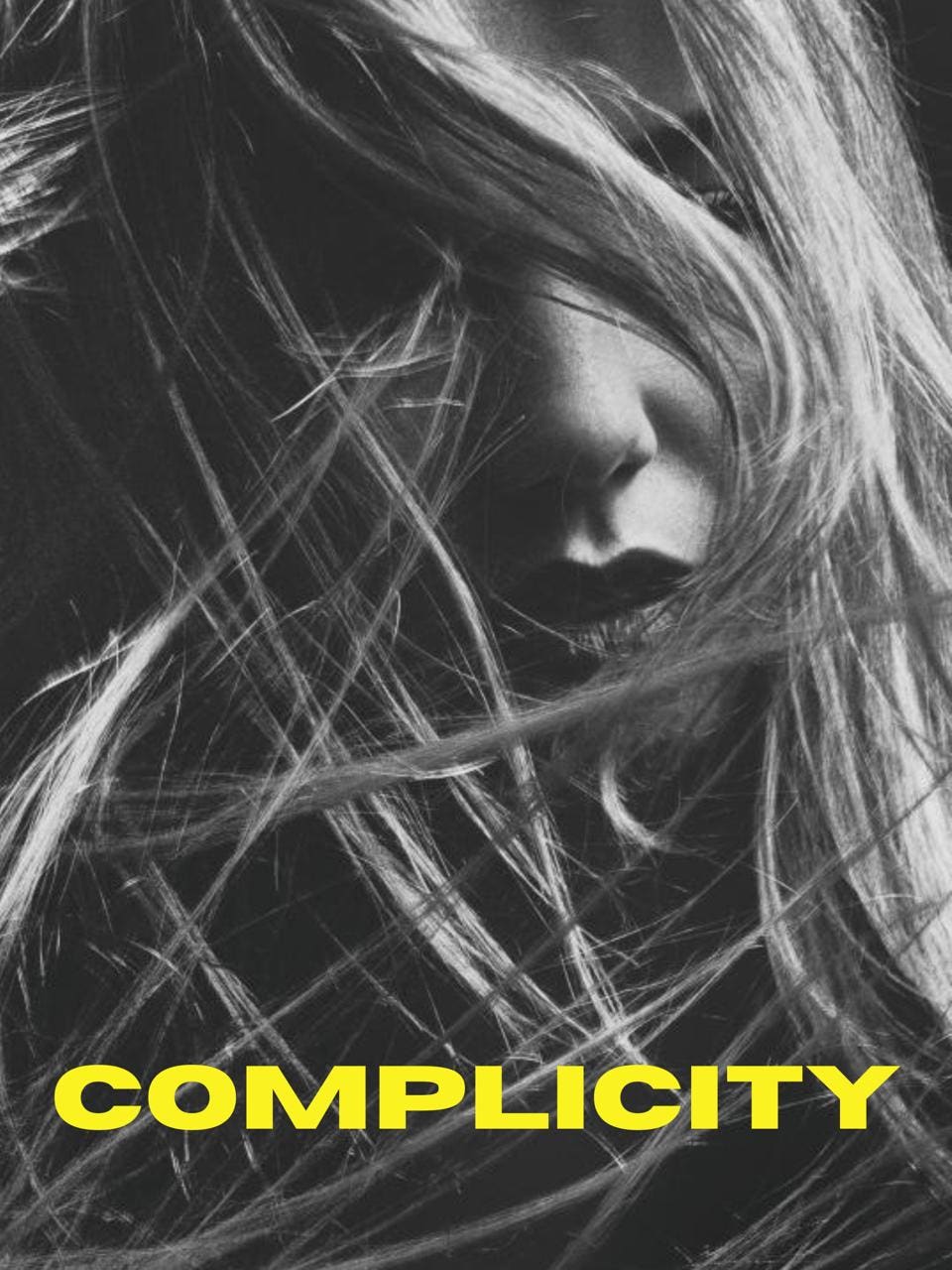 Complicity, a new play by Diane Davis, is the story of a woman who, in the wake of the #MeToo movement, witnesses sexual harassment and abuse in Hollywood and soon realizes her own complicity in it. The play is produced by The Eden Theater Company and will run at The New Ohio Theatre in New York City from September 30th through October 15th.

The story of Complicit, takes place in 2018, and was partially inspired by the Weinstein scandal, the women who supported him and the survivors of his abuse. It is directed by Illana Stein and features Tonia E. Anderson* (Trick of the Light with Pipeline Theatre Company; A Walk in the Sand at Abingdon Theatre), Katie Broad (Stop the Virgens with Adam Rapp at St. Ann’s Warehouse/Sydney Opera House), Christian Prins Coen (Special Needs at the Magnetic Theatre), Ben Faigus* (One Night Stands at Avery Schreiber Theatre), Christian Paxton (The Perfect Murder on Discovery), Nadia Sepsenwol (Tarantula with M-34; Resident Company Member at The Mercury Store), and Zach Wegner* (Raw Pasta at the Ice Factory Festival; Rich Boyfriend with The New Group).

I spoke to Davis about what inspired her to create this play. We also discussed if and how things have changed since the #MeToo movement within the theater community and what she hopes Complicity will bring to its audience.

Diane Davis: I became motivated to write something after the February 2018 death of Jill Messick, a Producer at Miramax, and the ex-manager of Rose McGowan. In the wake of a confused and factional debate over the organization of the #MeToo movement and another national women’s march, I became aware of how women work against one another to solve systemic sexual abuse. In relation to Weinstein’s arrest/exposure, I wanted to address how everyone knew about his behaviors as an open secret but did not do anything about it. Why?

I started to reach back and think about women who challenged the status quo – the traditions of the state, and I ended up obsessing with the play Antigone. The first scene I wrote for a 10-minute play festival modeled the scene between Antigone and Ismene at the beginning of the play (which is the third scene in the play) about a sister that gave up a major motion picture deal to expose the system of abusers and honeypots that set up her abuse by “the Hollywood mogul,” and how her sister/agent just wanted her to move on and work within the system. These two opposite views of the system were then contrasted against Lilia, the honeypot, and how those abused by the system often become those who abuse others. Lilia is both bystander and an extension of the system. She never wanted to jeopardize her position of power, despite being an advocate for women filmmakers. That ten-minute snippet turned into a 90-minute play. After workshops, many revisions and many readings, here we are!

Sarachan: What did you want to explore within this play?

Davis: How the open secret about Weinstein continued among women, and how women, in some ways, acquiesce to that system because of fear and competition. Women in Hollywood working to be a part of the Hollywood system have always been tied to the financial hold men had over that system: their casting couch, their abuse of power and prestige to coerce sex or physical assault. We hope that people become more attuned to understanding how power is patriarchal and historical and presently continues to be driven by men believing their privilege, and their right, is their power over women. This binary construct of sex power roles has been set in the fabric of society for the millennium. Why would we think it would just be undone by a couple of arrests without any systemic change to the system?

Sarachan: What about the concept of women holding other women accountable felt important to you?

Davis: With the arrest of Ghislaine Maxwell, women are in many different ways, part of the problem rather than part of the solution. We see this with the deconstruction of women’s reproductive rights, especially when they refuse to acknowledge that the rape of women is a legitimate reason to abort an unwanted pregnancy as a result of a very unwanted assault. Women pushing this “us against them” are part of the same groups that say, “these women, actresses and producers wanted Weinstein to help them, and they negotiated with sex at their own risk.” We need to call it out and for us all to check our part in this system.

Sarachan: We know the #MeToo movement has created some positive change in the way Hollywood makes films. Do you feel it’s also affected the theater community in positive ways?

Davis: Very much so! I know for independent theater companies in New York City, most operate with the mindset of equity and individual empowerment at all levels. They listen to the concerns of all artists and staff involved in a production. In their active efforts to be anti-racist they are anti-sexist, and work to maintain a safe and equitable working environment; creating a safe space where people feel they can speak up and question the status quo. However, the larger machines of Hollywood that come to Broadway still carry with their modes of operation that allowed for systematic harassment and abuse to continue. I am not convinced they have all done the hard work to undo systematic sexism and abuse.

Sarachan: How does it feel to return to live theater?

Davis: Working in live theater is a dream returned! Attending and watching live theater leaves me with visceral joy. I’m grateful to be in the rooms where it happens, creating or observing! A lot of new work is happening in New York City, and it is really eye-opening how talented the theatrical community is in creating theater that challenges and inspires dialogues.

I am very grateful that every theater I have attended has been responsible to make sure everyone feels safe about the process – on, off, and off-off Broadway shows!

Sarachan: What do you hope audiences take away from this play?

Davis: Along the journey of bringing this story to a production, many women expressed how nothing has changed in many ways. Many experienced a continuation of the abuse toward women despite Weinstein’s indictment, and claimed that men in power, often supported by women in power, found new ways of exploiting and abusing women.

We have stopped holding powerful men and the women behind them accountable for a system they have inherited and supported in their quest for success. We need to address the role of women in powerful positions in that process of supporting an unequal and abusive system. Most people don’t want to “rock the boat.” Until the recent arrest and conviction of Ghislaine Maxwell, women were not a part of the system of accountability. Now they need to be called out for pitting women against women at the expense of powerful men.

I want to inspire a solution-oriented dialogue that acknowledges the continued abuse and assaults against women; and that nothing changes if nothing does not dramatically change in the way men and women in positions of power approach sex relations, and sexual rights in Hollywood and the workplace. NDAs and such are outlawed, but these large machines still use them to keep the system quiet. Sexual rights are being put asunder, and women are as responsible as men.

I want all women, despite their political preferences and cultural differences, to let go of the gauntlet and come together to find common ground to protect all women’s rights against sexual harassment, abuse, and basic human rights.

Sarachan: What are you working on next?

Davis: I am working on a play about the journey of Margaret Holloway (The Shakespeare Lady of New Haven) of becoming an artist and how that journey slowly slipped away from her by the time she graduated from Yale as an African American directing major in 1980.

This interview has been edited and condensed for clarity.

Tickets for Complicity can be purchased here.

Denial of responsibility! Pedfire is an automatic aggregator of the all world’s media. In each content, the hyperlink to the primary source is specified. All trademarks belong to their rightful owners, all materials to their authors. If you are the owner of the content and do not want us to publish your materials, please contact us by email – [email protected]. The content will be deleted within 24 hours.
Diane Davisnew playsRisa SarachanThe New OhioTheater in NY
0
Share

Why Subversive Brows—Skinny, Bleached, Shaved, or Bejeweled—Are Having a Moment