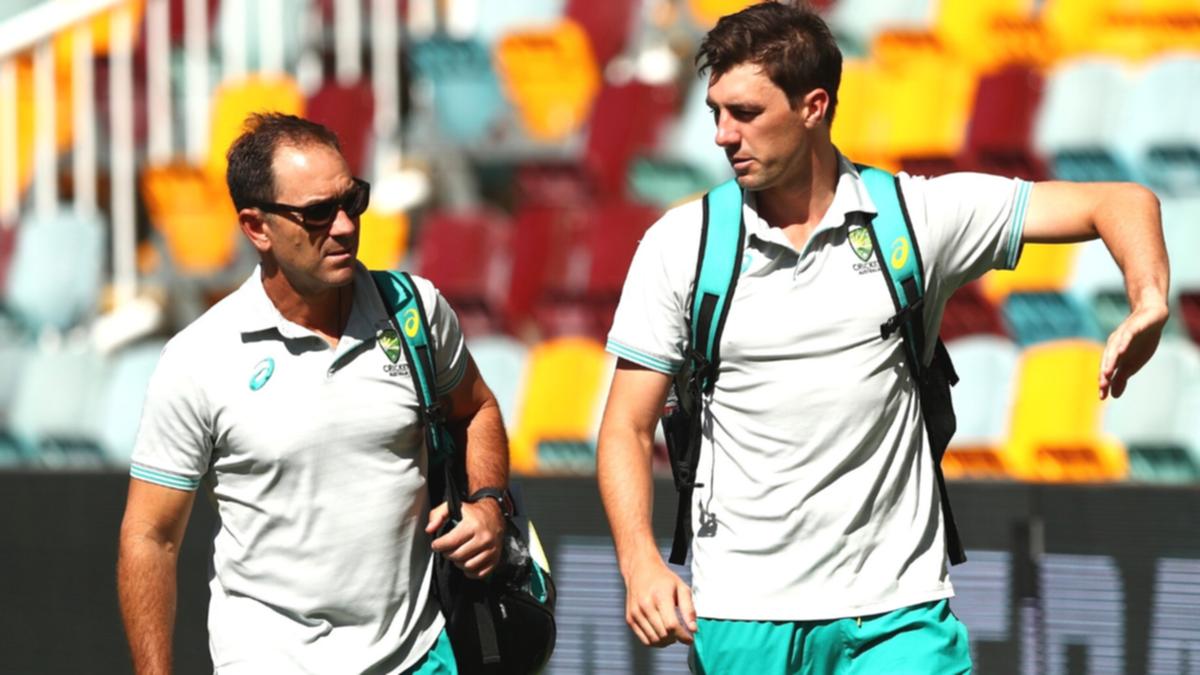 Justin Langer still can’t work out why he was effectively sacked as Australia’s men’s cricket coach.

Despite winning the T20 World Cup and the Ashes, Cricket Australia – under mounting pressure from an unhappy playing group – only offered Langer a six-month contract extension after his initial four-year deal expired.

WATCH THE VIDEO ABOVE: Aussies baffled by bizarre DRS decision against England.

It was a slap in the face that forced Langer’s hand and he resigned soon after.

Debate and disagreement over Langer’s position as coach of the men’s national side became an ugly spat pitting the current generation of Australian players against their predecessors, who backed Langer.

Aussie Test captain Pat Cummins and then-white ball captain Aaron Finch, both seen as agents for change despite the recent success of the Aussie team across all forms of cricket, became antagonists in the saga – at least from the Langer corner of the ring.

“This is the killer for me,” Langer told the Back Chat podcast.

“(Aaron Finch) gave me some feedback and then I rang (him). I said, ‘Finchy, mate, we’ve been captain and coach for four years!’ He goes, ‘Yeah, I know. I’ve been a bit of a pussy, haven’t I? I don’t like confrontation.’ ‘What do you mean (by) confrontation, mate? Just tell me.’

“I’ve got a curious mind. You evolve. You get better. That’s life, right?

“I spoke to Pat Cummins. He said to me about five times, ‘This might be brutally honest.’

“I said, ‘Pat, there is nothing brutal about your feedback. What is brutal is I’m hearing it behind my back through the media or through sources’. No one’s telling me. Tell me.

Langer said that at least with former Test captain Tim Paine, he got some straight answers.

“With Painey, we had this conversation, and he goes, ‘Mate I haven’t been able to sleep.’ I said, ‘Mate, just be 100 per cent honest with me’,” Langer said.

“And I’m sitting there going, ‘You’re joking, awesome, no worries’. It was the easiest s*** to change. I’m going, ‘Thanks mate,’ and it was like a gift.

“Tim Paine was really clear with me. It was awesome. I felt like jumping through the FaceTime and giving him a hug (to say), ‘Thank you so much’.”

Despite his differences with the new-age playing group who craved a more empathetic coach without so much “intensity”, Langer said he did take on the feedback he received and acted on it.

That’s why he’s still at a loss to come to terms with his unceremonious parting of ways with Cricket Australia.

“The hardest thing for me of all of it was: I got the feedback (and) I did something about it. We won the T20 World Cup, we won the Ashes. We were No. 1 in the world.

“Because you can’t give someone feedback, do something about it, and then that to happen.

“It’d be like … a player says to me, ‘Coach, I’m the best one-day player in the world, I’m the best Test cricketer in the world. I want to get in the T20 side. What do I have to do?’ I give them some advice. And they say, ‘Oh, thanks so much coach, I’m going to go and work on that’.

“(He) does it, works on it, we pick him, give him the opportunity, he gets five man of the matches in the first five games. Well done.

“(Then we say) Actually, we’re going to drop you anyway, mate, because we liked someone better.

“Imagine saying that to a player.”

He was also infuriated with the constant leaking of information to the media, which seemed to direct the narrative as Langer lost control of his position.

“Everyone was being nice to my face but I was reading about this stuff and half of it, I swear to God and on my kids’ lives, I could not believe that is what was making the papers,” Langer said.

“A lot of journalists use the word ‘source’. I would say, change that word to ‘coward’. A coward says, not a source.

“Because what do you mean a source says? They’ve either got an axe to grind with someone and they won’t come and say it to your face, or they’re just leaking stuff for their own agenda. I hate that.”

“They used to talk about mutiny on deck.

“What I’ve learned about mutiny on deck is that it’s usually one or two voices, and they’re the loudest voices and people listen to loud voices.

But Langer admits there was one thing he would have done differently during his coaching reign.

“I’ll tell you what I would have done different,” Langer says.

“This might surprise a lot of people, but in four years of being the head coach of Australia, I presented to the Cricket Australia board three times. I would have asked, almost demanded it (to present).

“As you know, I’m on the board of the West Coast Eagles. (Eagles coach Adam Simpson) would present to the board at least three quarters of every board meeting.

“I’m on the footy affairs committee, so I know what’s going on in the footy department. And Simmo lives 500m from me, so we have a beer together. There’s nothing I don’t know.

“But I talked to the Cricket Australia board three times in four years. That‘s craziness.

“And that’s the only thing I’d do differently.”

Australia in fits of laughter and confusion at DRS farce: ‘Where are we?’

Denial of responsibility! Pedfire is an automatic aggregator of the all world’s media. In each content, the hyperlink to the primary source is specified. All trademarks belong to their rightful owners, all materials to their authors. If you are the owner of the content and do not want us to publish your materials, please contact us by email – [email protected]. The content will be deleted within 24 hours.
Australian Cricket TeamCricketjustin langerpat cumminsSport
0
Share