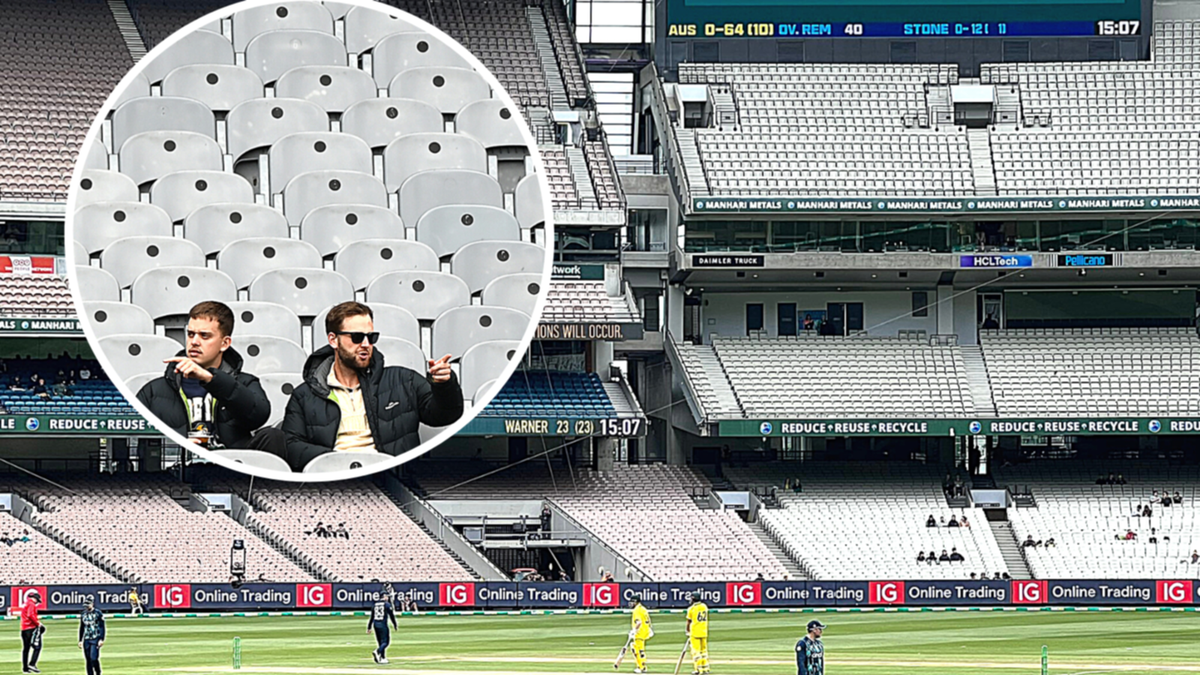 Fans have questioned Cricket Australia’s decision to schedule a one-day international on a Tuesday afternoon after a paltry crowd turned up to the MCG.

Australia’s third and final ODI against England began at 2.30pm AEDT with less than 5000 people in attendance. And cricket officials will be worried this great sporting rivalry isn’t living up to what it used to be.

WATCH THE VIDEO ABOVE: All the latest from the crowd crisis at the MCG.

That crowd number grew by another 2000 by 4pm, but it was still a disastrous turnout.

Yes, it was a cloudy Tuesday – and yes, there was a rain delay – but to put it in perspective, more than 37,000 people attended the day-nighter in January 2018

And if you go back a little further, 71,000 turned out to watch Australia play the arch enemy in a day-nighter back in 2007.

The average crowd for the only three ODIs played at the MCG in November is over 17,000.

But just nine days ago, over 80,000 fans turned up to the same venue to watch England win the T20 World Cup with victory over Pakistan in the final.

Aside from the match being scheduled on a weekday and Melbourne’s grim weather, the fact it was a dead rubber as well would have also contributed to the poor attendance.

One fan wrote: “Who’s idea was it to play an ODI series right after a World Cup in the middle of November!?

“There’s been no advertising for this either. Is CA trying to fail on purpose? This series makes no sense …. This current administration makes no sense.”

Another punter wrote a list on how to “make ODIs great again”.

The list included, not playing on “a random Tuesday in November”, slash ticket prices, use other venues such as Tasmania and Geelong, and “actually let people know (the games) are on”.

Another fan tweeted: “Tuesday afternoon ODI at the MCG in November? Can hear the echo of bat on ball. If that doesn’t prompt Cricket Australia to review the home season schedule, nothing will.”

And another: “I trained past the ‘G from work at 1pm and there was no one at the gate. Cricket on a Tuesday arvo was a bad idea and suspect the weather does not help.”

While the temperature didn’t top 20 degrees, Australian opener Travis Head was in hot form, making a brilliant 152 after the rain delay.

David Warner was also impressive, punching out a sparkling 106.

But the 50-over version of the game has seen its relevance slide in recent years as it now competes with the shorter and snappier T20 format.

The hair that’s gone viral in Qatar: ‘Why the football world hates America’

Denial of responsibility! Pedfire is an automatic aggregator of the all world’s media. In each content, the hyperlink to the primary source is specified. All trademarks belong to their rightful owners, all materials to their authors. If you are the owner of the content and do not want us to publish your materials, please contact us by email – [email protected]. The content will be deleted within 24 hours.
Australian Cricket TeamCricketSport
0
Share