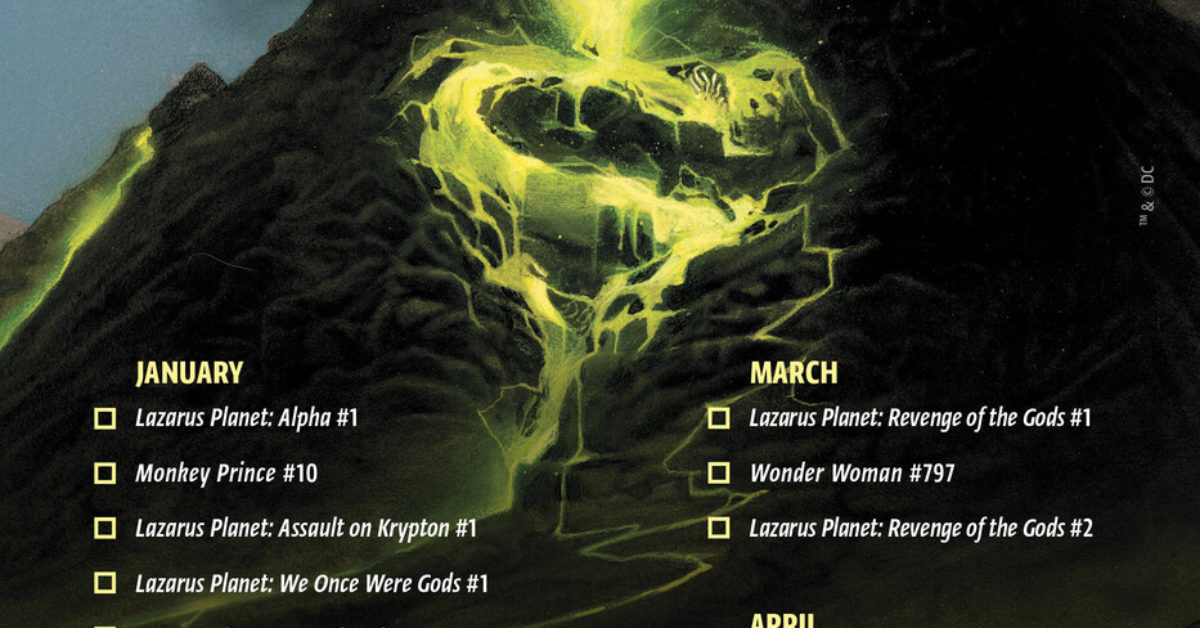 I confess, it did feel like a bit of a Rich Twitch. Yesterday, Bleeding Cool ran the Lazarus Planet checklist for the upcoming event from DC Comics. And today, DC Comics has totally upended that, running  a new checklist that continues beyond Lazarus Planet: Omega into March and April 2023 with Wonder Woman ahead of her 800th issue in June, and a new four issue mini-series in Lazarus Planet: Revenge of the Gods from G. Willow Wilson and Cian Tormey.

“I’m excited for readers to see what we’ve been cooking up–old favorite characters, new favorite characters, and team-ups you’ve never seen before are all coming your way,” said writer G. Willow Wilson. “Diana will be tested in ways she’s never been tested before, and find new allies in unexpected places. There are some twists and reveals that I guarantee will have you jumping out of your chair.”

Lazarus Planet: Revenge of the Gods takes place immediately after the events of Lazarus Planet. The gods of the Multiverse have decided to take down the heroes they once called champions and the world they’ve sworn to protect. For years the gods sat idle atop their mountains as their legends faded into obscurity along with their bodies. Now is their time to remind the selfish mortals of their existence and take back the world with something more powerful than belief…fear. Only the brave heroes Wonder Woman and Shazam stand in their way, but will their combined powers be enough?

“I am incredibly excited to get to work with G. Willow Wilson. I have been a fan of her work for years now and I couldn’t have chosen a more exciting book to work together on than Lazarus Planet: Revenge of the Gods,” said Artist Cian Tormey. “The story is going to feature things that I’ve never even thought about drawing before, so I hope everyone is ready for what we have planned!” Cover by GUILLEM MARCH

LAZARUS PLANET: REVENGE OF THE GODS #1

LAZARUS PLANET: REVENGE OF THE GODS #2

The gods have leveled up, and Shazam is no match for them! After Wonder Woman’s changing of sides to save her Amazon sisters, Billy must use his quickly fading wisdom of Solomon to formulate a plan to stop his world’s destruction. Little does he know a secret ally awaits him in Olympus…but how will he make it there? Sounds like a job for Wonder Girl! Cover by GUILLEM MARCH

Wonder Woman #797 and #798 will also tie-in to Lazarus Planet: Revenge of the Gods to set up Diana Prince’s story in Dawn of DC in 2023. After Diana’s shocking choice to align herself with the gods, her world has changed. Could godhood be the answer to all her problems? Find out as Diana ascends! Wonder Woman #797 and #798 will feature Mary Marvel backup stories by The New Champion of Shazam Writer Josie Campbell and art by Caitlin Yarsky (Black Hammer). Cover by YANICK PAQUETTE