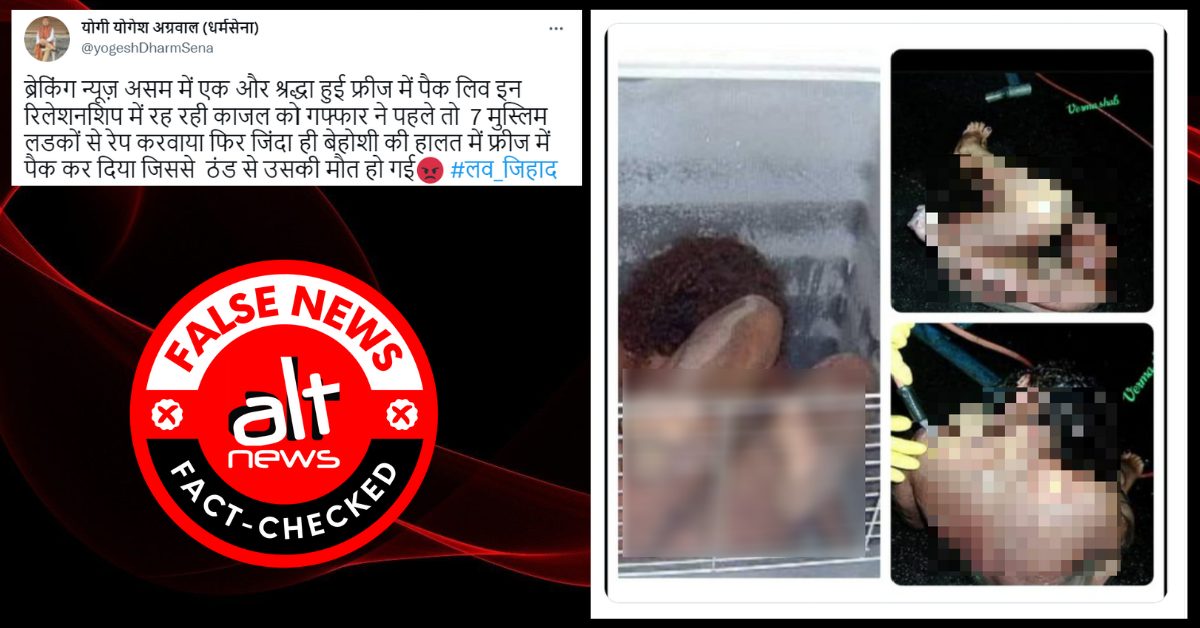 [Warning: This article contains visuals that may be disturbing to readers.]

A collage of photographs featuring a naked female corpse inside a freezer has been making the rounds on social media. It has been claimed that the woman named Kajal was in a relationship with a man named Ghaffar. Furthermore, it is alleged that she had been raped by seven Muslim men who then locked her inside the fridge, leading to her death. The viral post also claims that following the woman’s death, Ghaffar Mian and his accomplices raped the girl’s corpse and put it back inside the fridge.

Yogi Yogesh Agarwal made the same claim while tweeting the image. (Archived link)

Alt News searched news reports from Assam for finding out details of the incident but did not come across any report corroborating the claims made in the viral posts. Next, we performed a reverse image search of the viral collage on Google. This led us to the source image carried in a 2010 blog post. The post contained all the images featured in the photo in circulation. However, there was no mention of when or where the incident occurred. We also found another Portuguese blog post from the same year containing the image in question. It is cited as an incident that occurred in Brazil’s Usasco. In fact, we observed the the picture has been circulating from time to time in connection with different incidents. In 2021, Yahoo News carried the image while reporting on a similar incident from Venezuela. Though Alt News cannot confirm when and where the photo was taken, it is clear that it is at least 12-year old and not from Assam.

The Assam Police tweeted a link to this blog post, stating that the image was actually from a 2010 Portuguese blog and was being circulated with a false context. Along with this, it warned social media users with punitive action if they shared the photo’s with misleading messages.

Note: Alt News does not concur that the link mentioned in this tweet is the original source.

An image from a Portuguese blog of 2010 is being shared with a completely false context on Social Media.

Appropriate action will be taken against those found sharing such messages.

To sum it up, social media users shared old images with a false communal angle. Following the Shraddha murder case, the internet has been rife with similarly misleading ‘Love Jihad’ claims, citing the names of a Hindu woman and a Muslim man.