Don’t Worry Darling film review — not the car crash you might expect . . . initially 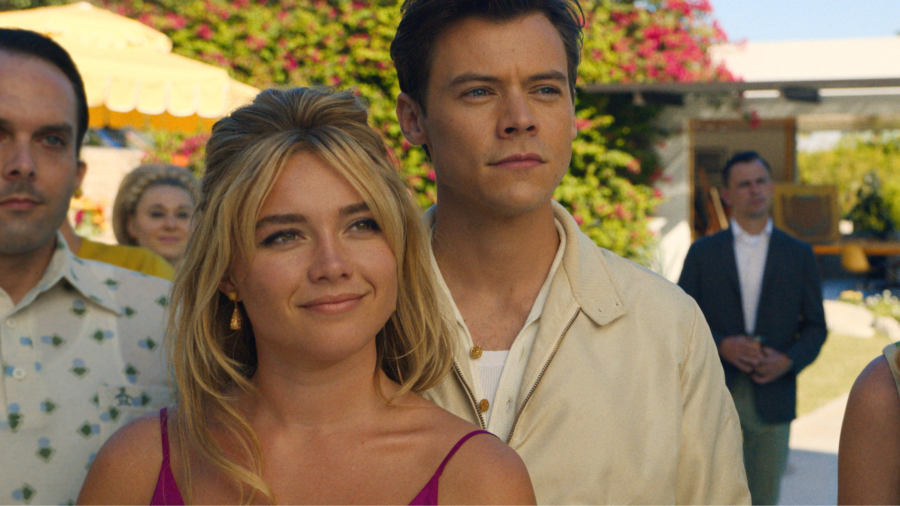 You can’t buy the kind of publicity that has come in advance of the release of Don’t Worry Darling. These days, the internet does it for free. With the FT having already put into perspective the online mudslide burying the movie, let only the briefest recap mention the many feuds involving director Olivia Wilde, star Florence Pugh, moonlighting pop icon Harry Styles, and an actor who isn’t even in the film, Shia LaBeouf. The conspiracy-minded have tagged it a ruse to drum up ticket sales. Are you in the queue yet?

For the ghouls, I bring mixed news. Anyone hoping for the film to be a grand disaster may initially be disappointed. But stay tuned! At first, at least, Don’t Worry Darling simmers to promising effect, intrigue abuzz in a Mad Men America, the screen a dazzle of mid-century period detail. Pugh is happy housewife Alice, hosting drinks parties for the picture-perfect couples of the neighbourhood. Her husband is Jack (Styles), the backdrop all gleaming Chevrolets, chain-smoking and martinis.

A twist with that? Well, if you assume the year to be, say, 1960, no news event of any kind ever acts as confirmation. (A calendar would do.) While we’re at it, where exactly are we? Jack and Alice’s pristine desert suburb is called Victory: Chris Pine plays a magnetic de facto mayor. But, again, co-ordinates are missing. Are we near Los Angeles? Las Vegas? Ulaanbaatar? The wives don’t ask. They just wave their husbands off to opaque engineering jobs, then proceed to ballet class.

The possibilities may hook you. Plenty of us will want to be hooked. Wouldn’t it be nice if Don’t Worry Darling was the kind of standalone, fun-but-chewy Friday night movie it aims to be? Remember too Wilde’s likeable 2019 debut Booksmart, the director a minty-fresh new voice. The formula now is cynical but clever, wedding the old-Hollywood production values of backers Warner Bros to the Gen-Z jitter of indie studio A24. Pugh first played a variant on Alice in their Nordic horror Midsommar. Here again, she gloms on to something nightmarish beneath the apparent idyll.

But the match of actress and role also makes sense simply because Pugh is so good at it, digging for the truth as Wilde assails her with uneasy visions, dismissed by the town doctor. You may have concerns of your own, not least the uncredited debt to Get Out. But between female lead and production design, your misgivings are soothed away too. Honestly, darling, why fret?

One answer is the men. If Pine is miscast, the Styles we see here would have improved the movie through not being cast all. For every ounce of Pugh’s star power, he exerts an equal and opposite drag. The singer seems aware of it himself, a world famous performer shrinking from the camera.

As for the rest, the rubbernecks get their car crash eventually. For film-makers, the great advantage of a bad plot bombshell is that reviews are limited in raising the alarm for fear of including spoilers, like a restaurant critic with a cockroach in the soup who has to let the readers get food poisoning anyway. All I can say is order carefully. Off-camera scandals come and go. An ending this botched is forever.

In cinemas from September 23

Don’t Worry Darling film review — not the car crash you might expect . . . initially