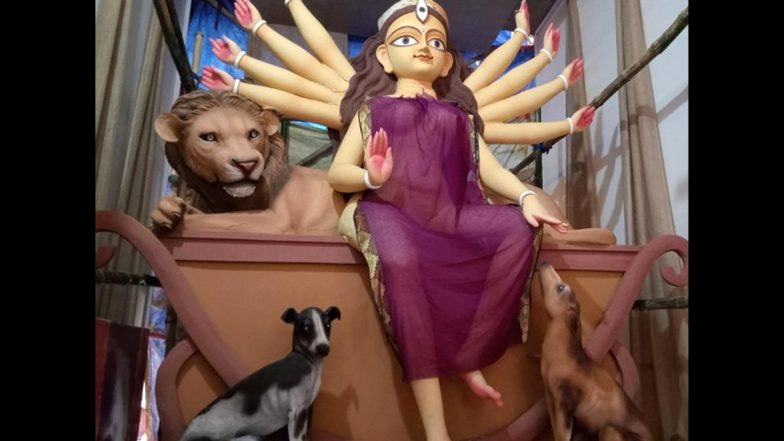 Kolkata, September 19: As the festival of Durga Puja is nearing, people are coming ahead with one creative idea after the other. A similar example was seen in North Kolkata’s Bidhan Sarani Atlas Club which came up with the first of its kind ‘Pet-friendly’ Puja Pandal. In the idol, the ‘Asur’ was replaced by two street dogs who were seen praying for shelter before Maa Durga, showcasing the theme of ‘Shelter for pets’.

Also, the ‘Asur’ has been depicted riding a motorcycle and crushing the small puppies under its wheel. It represents those people, who hate pets and torture street dogs. The Secretary of Bidhan Sarani Atlas Club, Biswajit Ghosh told ANI, how they decided to go on with this theme despite fearing controversy. Durga Puja 2022: Kolkata Metro To Run All Night Services on These Days During Festival; Check Timings And Other Details.

“We know that we have to face controversy over the idol but earlier the traditional Durga Idol used to have ten hands but now it has also changed. This social issue is important to show how street dogs are being treated. This year we have received the Cultural Heritage Award from UNESCO,” said secretary Biswajit Ghosh.

The 10-day festival marks the worship of Goddess Durga. Months before the festival, artisanal workshops sculpt idols of Durga and her children (Lakshmi, Saraswati, Kartik and Ganesh) using unfired clay. The festival marks its beginning on the day of Mahalaya when the ritual of ‘pran pratistha’ is done by painting the eyes of the goddess idol. Sasthi, Saptami, Ashtami…every day the festival has its own significance and set of rituals. The celebrations culminate on the tenth day known as Vijaya Dashami when the idols are immersed in water bodies from where the clay was sourced.

This year Durga Puja begins on October 1 with Maha Shashti and will end on October 5 with Maha Dasami. The significance of Durga Puja goes beyond religion and is revered as the celebration of compassion, brotherhood, humanity, art and culture. From the reverberation of ‘dhaak’ and new clothes to delicious food, there remains a merry-go-round mood during these days.