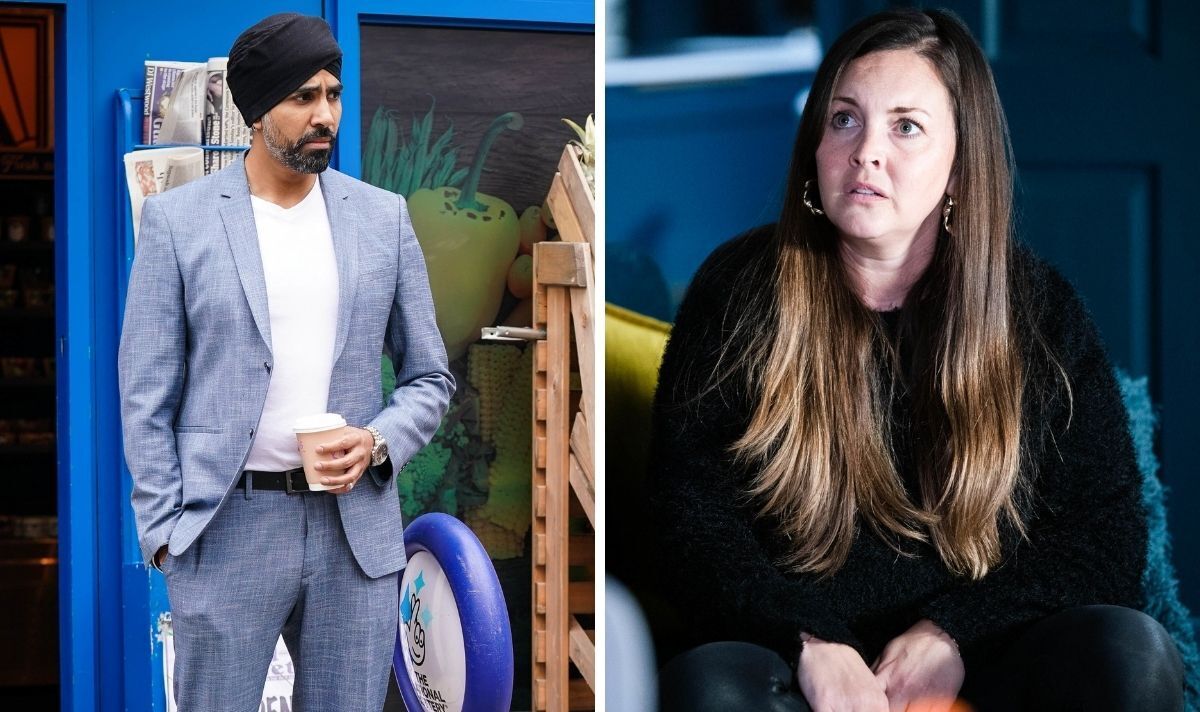 Walford favourite Stacey Slater (played by Lacey Turner) has found some happiness after a period of turmoil. Kheerat (Jaz Deol) has given her something else to focus on after the two admitted they liked each other. However, Kheerat’s dictatorial mum Suki Panesar (Balvinder Sopal) wouldn’t approve of the relationship, so he’s been trying to keep it a secret. When Stacey becomes fed up in future EastEnders episodes, she breaks up with him, but will he propose to her to prove he isn’t embarrassed?

Official spoilers from the BBC soap confirm Stacey will begin to fear Kheerat is ashamed of her.

After talking to Eve Unwin (Heather Peace), Stacey wonders if Kheerat is embarrassed by her, so she decides to test him.

In view of everyone, she kisses him in the café, but she gets the answer she was dreading.

Furious, she ends their relationship, not wanting to be with someone who feels the need to keep her a secret.

READ MORE: Stranger Things season 4 volume 2 release time: What time is it out?

After this, Eve puts Kheerat in his place over his behaviour towards Stacey.

Could her words make Kheerat realise he hasn’t been treating Stacey right?

He made it clear in the past how much he likes her, so would be heartbroken to lose her.

Eve might suggest he has an ultimatum from Stacey, either prove he isn’t embarrassed or remain apart.

Perhaps he will decide he has to make the ultimate gesture.

“Maybe you’ll be interested in our Valentine’s weekend special,” Eve chimed in.

“Where you buy a sarnie and we throw in a free snog?” she winked at Stacey, laughing.

He followed Stacey behind the van, where she commented: “Sorry about Eve.”

The two ended up kissing, and since then have been seeing each other on the sly.

Viewers have also enjoyed the pairing, excited the two much-loved characters have finally found each other.

Not wanting to break up with Stacey, it isn’t too much of a stretch to suggest Kheerat could pop the question.

At the moment, Stacey is married to Eve, who she met in prison.

But this was a marriage of convenience, with Eve being able to get out of jail easier if the two were together.

Now they have been out of prison and settled into a sensible lifestyle for a while, it probably wouldn’t matter much if the two “split.”

Kheerat may think that by proposing, he is proving to Stacey he is serious about them, and not embarrassed.

To really hammer home the statement, he could ask her in public, perhaps in front of his mother.

Stacey has been very unlucky in love since she first arrived on the Square back in 2004.

With Kheerat a promising match, could the two enjoy a long, happy life together once they’re engaged?

EastEnders continues on Monday at 7.30pm on BBC One.

Amber Heard still being investigated for allegations of perjury in Australia