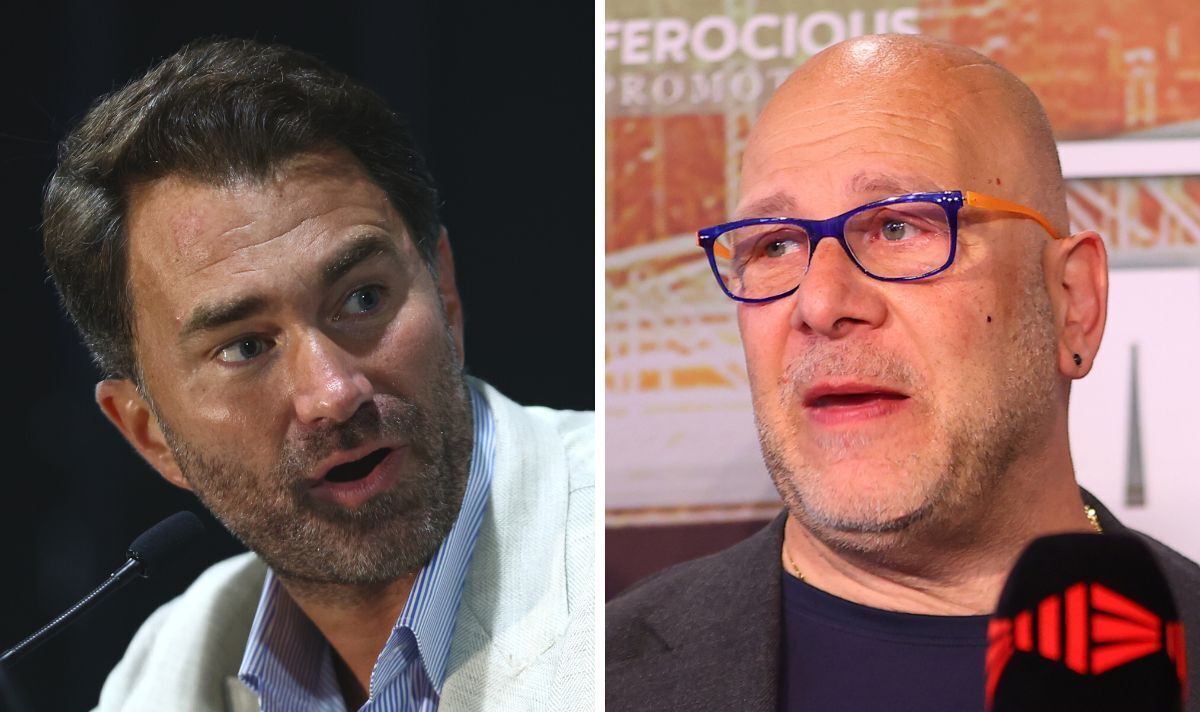 Eddie Hearn and Deontay Wilder’s promoter Lou DiBella have clashed on Twitter after the Matchroom Boxing chief claimed Oleksandr Usyk would win every round against the Bronze Bomber. The unified heavyweight world champion is now understood to be eyeing the former WBC king with Tyson Fury now set to meet Anthony Joshua in December in Cardiff – despite background talks and negotiations over an undisputed clash.

Now Usyk has Wider in his crosshairs as he prepares to defend his belts in early 2023 after ruling out a December showdown with Fury.

Should the fight with the Bronze Bomber go ahead, Joshua’s promoter Hearn believes Usyk has the quality and IQ to win every round – should he avoid the big right hand.

Hearn told ID Boxing: “I think [Usyk-Wilder] a good fight, I think obviously the Saudis will want the undisputed fight [between Fury and Usyk] but that couldn’t happen for a while now if we make the Fury-AJ fight, so we’ll have to see.

“I don’t see Usyk losing a round to Deontay Wilder but at the same time Wilder carries the power to cause problems for anyone.”

It appears Hearn’s comments have caused offence in some quarters after Wilder’s promoter DiBella snapped on Twitter.

He wrote: “Won’t matter if Wilder lands the one punch that knocks Usyk out. And he likely would. Like he would likely knock Joshua out. In fact, Hearn might be right until the knockout punch but does it matter? Respect the puncher.”

Hearn was quick to fire back, responding: “Might want to read it first.. ‘I don’t see Usyk losing a round to Deontay Wilder but at the same time Wilder carries the power to cause problems for anyone’.”

DiBella then replied: “I try to read as little prognostication as possible, but thanks for clarifying.”

Before adding: “It’s not a misleading headline. It’s a cop out to say ‘Usyk will win every round’ with the caveat that Wilder is dangerous. Why comment then. Of course, Wilder is dangerous. Obviously, you believe Usyk wins an easy, but risky, decision. I think Wilder KOs the better boxer.”

The back and fourth then continued with Hearn writing: “I didn’t say [double space] it was a misleading headline. I did hundreds of interviews last week and was asked my opinion. My opinion is I don’t think Wilder will a round against Usyk but basically has the power to take anyone out.”

When asked by DiBella for his official prediction, Hearn was committed to a Usyk victory.

He wrote: “I think the fight plays out like Wilder v [Luis] Ortiz 2 without the ending. Usyk’s engine in unbelievable and he won’t switch off or be static. Very wide UD or late stoppage via mental and physical fatigue!”

Usyk ripped up Hearn and Joshua’s plans to become a three-time world champion in August when he successfully edged AJ by unanimous decision on the scorecards in Saudi Arabia.

Now the Brit looks set to jump straight back into the ring for the biggest fight of his career when he faces arch-rival Fury in Cardiff on December 3 – although the contract is still not signed.

Joshua and his team have now accepted all terms for the mega-fight, which is set to land at the Principality Stadium later in the year.

Sparring is already underway for Joshua, who has been banking rounds in Loughborough with one of his usual dance partners Richard Riakporhe in preparation for Fury.

India is the ‘best bet’ in the global economy

UAAP: Michael Phillips eager to take on leadership role for…