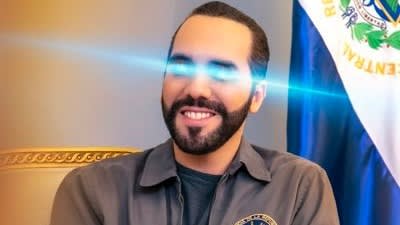 Today marked a big day in the bitcoin revolution. Or, in this case, revolución.

Early on Wednesday, almost three quarters of El Salvador’s lawmakers voted to pass the much heralded Bitcoin Law. The draft of which we’ve taken the courtesy of uploading for you here.

It follows President Nayib Bukele’s appearance at last weekend’s bitcoin conference in Miami, during which he promised to make the king crypto legal tender.

So is the bill a great victory for the hodlers? Well, here is the reasoning for why the country has decided to adopt it as a means of payment:

Now you might be asking yourself, after reading point 1, why El Salvador thinks that allowing a speculative asset to be used as legal tender would “increase national wealth for the benefit of the greatest number of inhabitants” and, well, we’re not quite sure.

You might also be asking yourself whether access to financial services couldn’t be improved by trying a less risky fintech idea like, say, mobile money (real money) but again, we’re afraid we are also none the wiser.

What we do know is that the bill has allowed the president of the country to add laser eyes to his Twitter profile picture, so maybe that’s something?

But how will this actually work? Well crypto news site Coindesk has helpfully summarised the bill for us thus:

Under the provisions of the bill (emphasis ours)

— Goods may be priced in bitcoin

— Taxes may be paid in bitcoin

— Bitcoin transactions will not face a capital gains tax

— The U.S. dollar will remain the reference currency for the bitcoin price

— The government will “provide alternatives” to enable crypto transactions.

That’s right. The US dollar — a fiat currency — will remain the reference currency. So prices in dollars. You can just imagine customers waiting at tills watching their phones waiting for the bitcoin price to climb a bit to get more for their money’s worth can’t you? What a great idea.

And who would actually want to pay in bitcoin rather than dollars, we hear you ask? Well, usually converting real money into bitcoin carries a hefty fee. And also what happens with returns? Do you get refunded at the original exchange rate or the one that happens to coincide with your return? Isn’t there a huge risk for both merchants and buyers when using such a volatile instrument? The bill, unfortunately, doesn’t say.

But despite the obvious flaws, might there be a grander plan being hatched here? OK probably not, but hear us out.

In our FT Alphaville Clubhouse discussion this morning an alternative theory was floated as to why El Salvador may want bitcoin, and therefore ultimately dollar, flows. The Central American country is seeking $1bn from the IMF, yet the discussions got complicated after Bukele fired its five Supreme Court judges in early May, following a landslide election victory. The Biden administration was not best pleased.

If the IMF funding is looking in doubt, then what better way to generate inflows than by letting international hodlers purchase your goods and services with their favourite coin? Seeing as refunds will likely have to be in dollars, you’d imagine merchants will be instantly selling their bitcoin for greenbacks on their exchange of choice to avoid volatility, creating a form of indirect dollar funding for the country. FT Alphaville friend Frances Coppola had even more radical thought which she posted on Twitter: perhaps the move is to help El Salvador to break away from the dollar system all together?

Perhaps we’re being too generous attributing a master plan to Bukele’s bitcoin antics. Perhaps he’s just another populist looking for social media attention. But, as with all things to do with the often politically embarrassing nature of balance of payments crises and IMF negotiations, it is worth considering.

We have no time to lose, conclude talks on patent waiver proposal by July-end: India