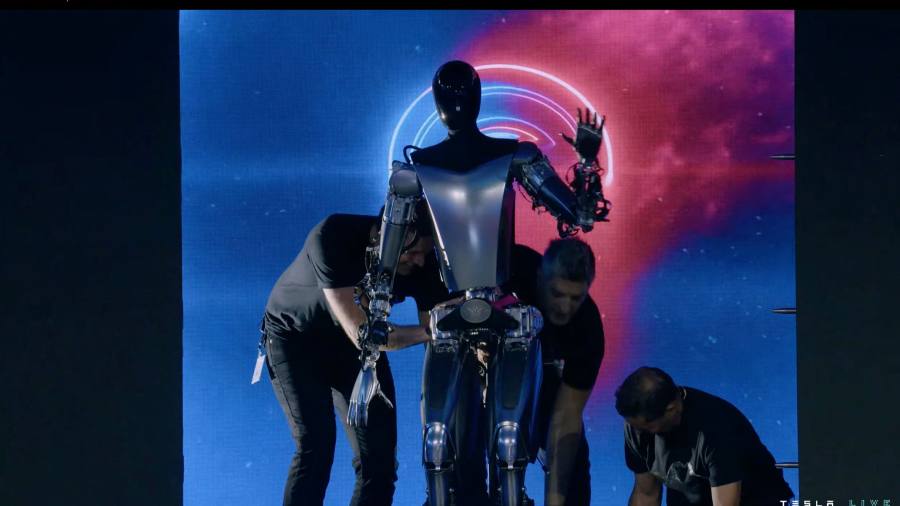 A rudimentary prototype of the robot that Elon Musk claims will one day be a part of everyday life for millions of people made its first, tentative public appearance late on Friday: pushed on stage by three Tesla workers, lacking a brain, and barely able to wave to an audience.

However, the tech industry’s pre-eminent showman appeared undeterred by the severe limitations of the hotly anticipated robot demonstration, claiming instead that the robot’s hardware was close to what his electric car company would put into mass production. It included 28 specially designed actuators to control the robot’s movements, a slim, shiny metallic body and a battery pack capable of powering the robot for an entire day.

“Our goal is to make a usable human robot as quickly as possible,” Musk said, adding that the price of the machine could eventually fall below $20,000. For good measure, he also used Tesla’s annual “AI day” to say he believed his company’s work on artificial intelligence “could make a contribution to AGI”, or artificial general intelligence, the technology that could enable machines to out think humans.

The robot demonstration came more than a year after Musk first revealed Tesla planned to build humanoid robots that could carry out a wide range of jobs in the home and at work. He attracted ridicule at the time for using a dancing actor dressed in a tight-fighting costume to show what the robot would look like.

The Tesla chief executive on Friday began with uncharacteristic caution, saying he wanted to “set expectations” about the current state of the technology before showing off the robot prototype. But, comparing the machine with last year’s dancing robot impersonator, he added: “We’ve come a long way compared to that. It’s going to be very impressive.”

Musk said he believed the robot, called Optimus, will be able to walk in a few weeks. However, he said the robots were “missing a brain — they don’t have the intelligence to navigate the world”.

Before the Optimus prototype was pushed out on stage, Musk showed off another robot Tesla engineers had built using off-the-shelf parts from other companies. This one was able to walk, and was shown in videos carrying boxes and watering plants. It was unclear whether the machine was being operated remotely or moving under its own control as it walked slowly on stage, waved and performed a cautious dance move.

According to Musk, Friday’s robot demonstrations, along with updates on his company’s self-driving car technology, were intended to attract more engineers with AI experience to work at Tesla. However, his big claims for the robots guaranteed a wide audience for the YouTube broadcast of the event.