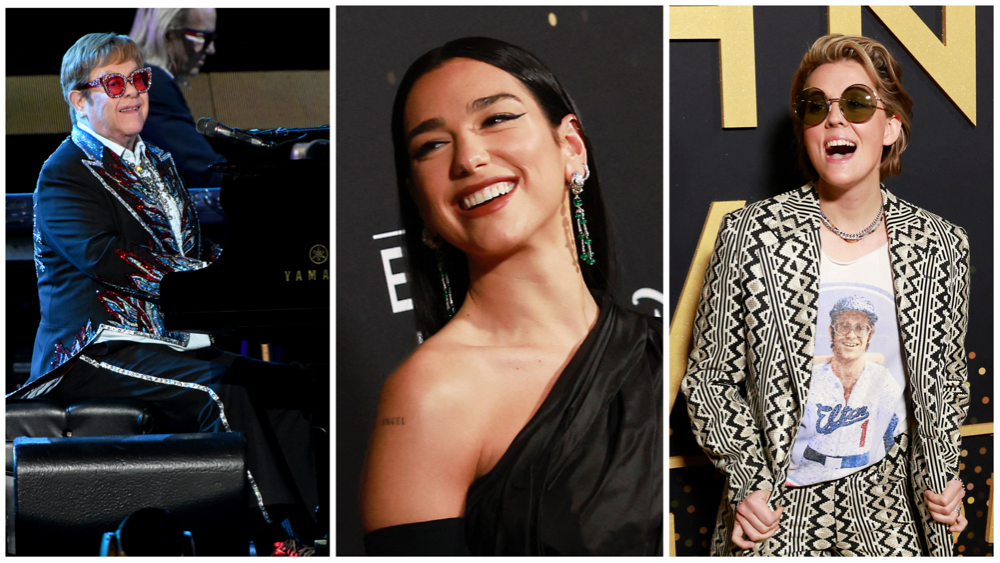 A famous phrase from a contemporary who was in the house for the concert, Joni Mitchell — “Don’t it always seem to go that you don’t know what you’ve got  till it’s gone” — seemed to have little bearing Sunday night at Dodger Stadium, as a crowd of almost 50,000 had a very robust sense of what they would be missing after Elton John retires from the road. Millions more were watching at home as Disney+ livestreamed his U.S. tour finale as “Elton John Live: Farewell from Dodger Stadium,” with duet partners Dua Lipa, Brandi Carlile and Kiki Dee participating in the sendoff, a webcast that had his recent hit “Cold Heart” leading the encores as the clock neared 2 on the east coast.

Two of the night’s collaborations had a sure place in the set list: Lipa would be joining John for “Cold Heart,” which he has been performing by himself in the final stretch each night on tour, and Dee was to have her spot on “Don’t Go Breaking My Heart,” recreating a moment that they shared when he last played Dodger Stadium in 1975.

The big question mark was what Carlile would be joining John for; although they shared a number on his last album, “The Lockdown Sessions,” it was likely to be something more iconic than that. The mystery remained all the way up until a verse into “Don’t Let the Sun Go Down on Me,” at which point Carlile entered at stage right, singing at the opposite end of the stage from his position at the piano until he stood and joined her for a happy hug at the sad ballad’s end.

John sang the entirety of the set benched, as it were — except for the moments in-between songs when he would stand and spread his arms in exultation, then turn to get a sip of water (which also had the effect of showing off the glitzy, embroidered “Elton” on the back of his tuxedo jacket)… and also with the exception of the duets with Dee and Lipa, which placed him up close with them in “we’re still standing” position.

The only other addition to the set that wasn’t a part of the previous two nights in John’s three-night stand at Dodger Stadium was some pugilistic fireworks from behind the stage at the conclusion of his main set-closer, “Saturday Night’s Alright for Fighting.”

Apart from the set list, John had a few other closing-night wrinkles. In a nightly moment where he talked about L.A. being special because of what showcasing at the Troubadour did for him in 1970, this night he name-checked former Los Angeles Times rock critic Robert Hilburn for giving him the review there that caught the industry’s attention. And he brought out first the man without whom he said he wouldn’t be there, lyricist Bernie Taupin, and then the family for which he said he had to be leaving, husband and manager David Furnish and their children.

There was no name-checking of any of the celebrity attendees in the house, most of whom attendees and the media had little idea of, but a press release issued in the wee hours from Disney+ cited Paul McCartney, Mick Jagger, Taron Egerton, Jude Law, Billie Jean King, H.E.R. and Donatella Versace as well as Mitchell among those who were taking the concert in. Many celebs and entertainment personalities made their presence known earlier by stopping to pose on the red carpet, including Angela Bassett, Courtney B. Vance, Miles Teller, Kirsten Dunst, JoJo Siwa, Connie Britton, Christopher Lloyd, Heidi Klum, Lucy Hale, Jenna Dewan, John Stamos, Raven Simone, Sara Gilbert, Sophia Bush, Lisa Rinna, Diana Jenkins and Reed Horstmann.

Notably absent at the Disney+ pre-reception on the premises were a number of expected high-level Disney execs, some of them said to be turning around at the last minute to deal with even more pressing company issues than a big moment for their streaming service — namely, the shocking return of Bib Iger as Disney CEO and ousting of Bob Chapek, something that was announced right as partygoers were arriving for the Disney+ soiree.

For those around the world who missed the livestream, a message on screen at the end of the show promised that the concert would be up on Disney+ for on-demand viewing soon.

The “Farewell Yellow Brick Road” tour stretched to 183 shows in the U.S. and Canada, including the final three-night run in L.A. that was attended by 140,000 fans.

The global tour continues overseas well into 2023 before John makes his truly final bow as a touring artist, assuming he keeps his word to retire from the road. That doesn’t mean he will be done performing, even then. In an interview with Billboard last week, Furnish spoke to the future possibilities for John as a live performer, saying one-off shows were possible, and also that John might establish a residency in a single city — which, he added, would most likely not be Las Vegas, since Elton has already been there and done that on a couple of occasions. But, Furnish added, it’s also possible that John won’t do any residences and really will settle down with family without doing any extended runs of concerts in the future.

Because Charlie Cox Does Not Live By Daredevil Alone