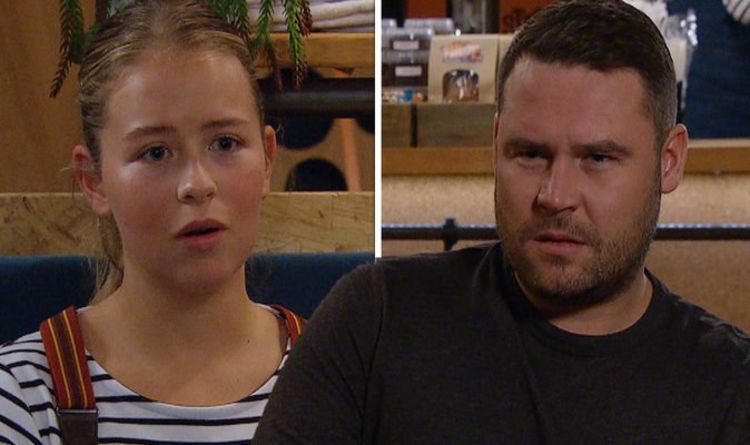 Emmerdale fans have watched Aaron Dingle (Danny Miller) suffer a great deal of heartbreak over the past year. Despite his best efforts he’s struggled to help his alcoholic half-sister Liv Flaherty (Isobel Steele) get over her addiction. He had been supported through these difficult times by his partner Ben Tucker (Simon Lennon). However, last week Aaron suffered a huge loss as Ben was brutally murdered. According to official ITV soap spoilers, Liv will soon be on trial in court and with Aaron feeling incredibly low, he’ll struggle to support his sister. Will Liv end up in prison if Aaron abandons her in court?

Regular Emmerdale viewers know Ben was murdered by serial killer Meena Jutla (Paige Sandhu), but no one in the village suspects her.

Instead, police have set their eyes on Liv after she was found to have argued with Ben on the night of his death.

It appears Liv could soon be arrested for Ben’s murder, as official spoilers reveal she’ll be put on trial in court.

In the upcoming scenes, devastated by his loss, Aaron struggles to find the strength to support his sister in court.

As Aaron wishes he could just disappear, Chas Dingle (Lucy Pargeter) promises him they will face this together.

Later on, Aaron arrives outside the court at the same time as Belle (Eden Taylor-Draper), Sam (James Hooton) and Vinny Dingle (Bradley Johnson).

As Aaron continues to struggle with his emotions, he makes it clear he needs some time alone to compose himself before going in.

Back at the Woolpack, Chas confides in her brother Cain Dingle (Jeff Hordley) her worries over Aaron’s detached mental state.

Chas reveals her concerns that Aaron could soon end up doing a runner.

Aaron’s left with a heartbreaking decision to make: should he stick by his sibling and support her in court? Or should he walk away leaving Liv to face her trial alone?

Danny Miller, who plays Aaron in the ITV soap, has already revealed fans will soon see him leave the show.

The actor revealed in a recent interview he had left Emmerdale in a bid to pursue a “new path”.

Danny explained: “I’ve got my baby now and I’m getting married next year and it felt like the right time to open a new chapter in my life.

“It feels so strange telling people because I haven’t really talked about it. I feel quite emotional about it actually,” the soap star told Digital Spy.

Who is in the new Netflix movie?

Ridley Scott May Be Anti-Superhero Movie, But He Had A Strong Reaction To Joaquin Phoenix In Joker

Watch the First Episode of Season 6 for Free

Vikrant Massey: God and most importantly the audiences have been kind

‘Daredevil’ Showrunner Responds To Calls For Him To Helm Revival