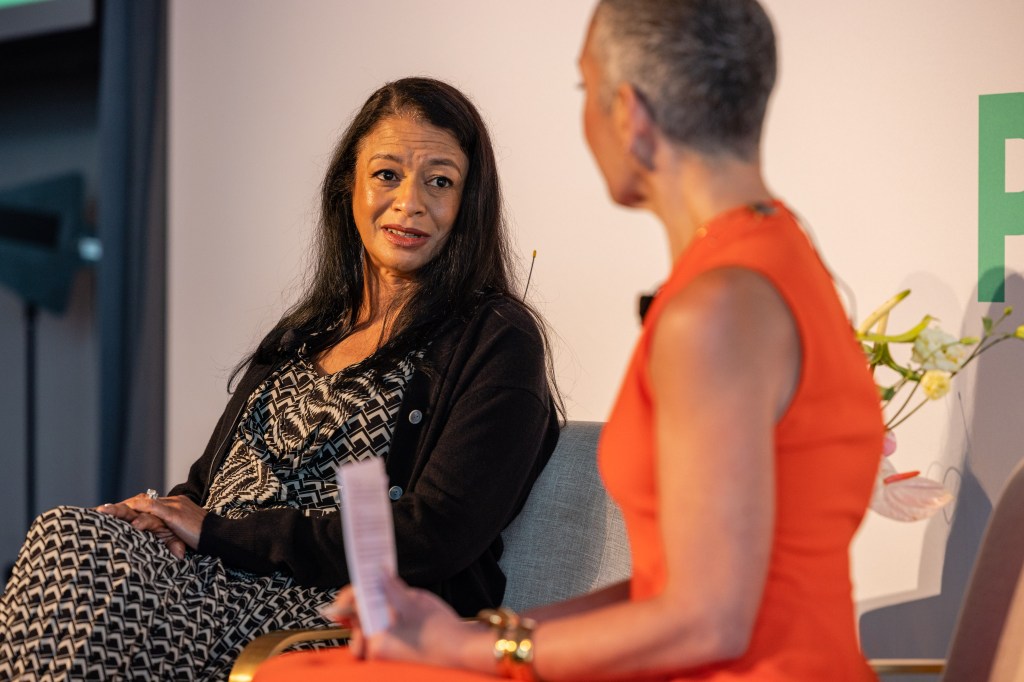 Tracey Travis, Estée Lauder Cos.’ chief financial officer of the last 10 years, has no regrets when it comes to her career.

In a conversation with Jenny B. Fine, WWD’s executive editor, beauty, at the 2022 Women in Power conference hosted by WWD, Beauty Inc and Footwear News, the executive detailed her journey to the C-suite, and all that she has learned along the way. Travis was one of the 2022 50 Women in Power, named by WWD, FN and Beauty Inc.

A former reliability engineer at General Motors, Travis is no stranger to being the only woman in the room. In her present role, she often still is — according to the S&P 500, only about 15 percent of CFOs today are women.

Travis shared why engineering was an entry point for her, and often other women in business: “I love to problem-solve, I love to affect change and engineering really teaches you how to do that.”

However, if women are to get their foot in the door to the business world through engineering, they need to be encouraged to pursue and maintain interests of the like long before they begin their careers, Travis said.

“If you look at the statistics of when girls start to either lose interest or aren’t engaged enough in STEM and math and science, it starts in middle school,” Travis said. “It then unfortunately continues through college, if they so choose to go to college, and that’s where I think we need more programs to intersect and get more girls interested in these careers.”

In her role at Lauder, Travis’ responsibilities include overseeing the company’s IT department, coleading the operating committee and leading strategy and M&A.  She also cofounded the company’s Women’s Leadership Network in 2017, which has more than 2,000 global members within the company and offers personal and professional development opportunities in the form of mentoring sessions, events and trainings.

“Our younger [female] generations, from what I’ve seen, certainly at Estée Lauder, do have more confidence, which is terrific,” said Travis, noting that while there is still much work to be done in tackling gender disparities in the workplace, a rising crop of women are increasingly taking it upon themselves to spearhead that change.

Travis also touched on the importance of uplifting other women in professional settings, whether that means encouraging someone to speak up in a meeting, or ensuring credit is given where credit is due.

“Sometimes, you’ll contribute an idea and it won’t necessarily be acknowledged, until a few minutes later, someone else says something very similar or exactly the same, and it does,” she said, noting that while it may seem daunting to stand up for oneself, especially when working in a male-dominated industry, it’s a practice that becomes easier over time — and more difficult the longer it is put off.

Like many companies now, Lauder has been rolling out a hybrid work model at most of its global offices. During the pandemic, the company saw the value of remote work in allowing employees an increased ability to adequately and comfortably tend to other aspects of their lives.

Travis said Lauder also feels a responsibility to take a stand when it comes to social issues, expressing open support of the Black Lives Matter Movement and solidarity with the AAPI community following the uptick in violence and discrimination Asian people have faced in recent years.

“A decade or so ago, I think many corporations tried to play an agnostic role related to a lot of [socio-cultural] issues,” Travis said. “The reality is our employees are part of society, and they’re impacted by societal issues. We have to take a stand, first and foremost, to support our employees, but also to be a good corporate citizen in terms of the communities that we operate in.”

Travis, who has two daughters, believes there’s no reason why women can’t have all they want when it comes to their lives and careers — so long as their choices are, in fact, theirs.

“I’m a big ‘no regrets’ person. I’ve made conscious choices. My younger daughter started her career in one of those [demanding] jobs and very quickly decided she wanted more balance. I want them both to live a full life, and that includes having a career that is their choice.”

Ofsted raises concerns over use of restraints on pupils in…