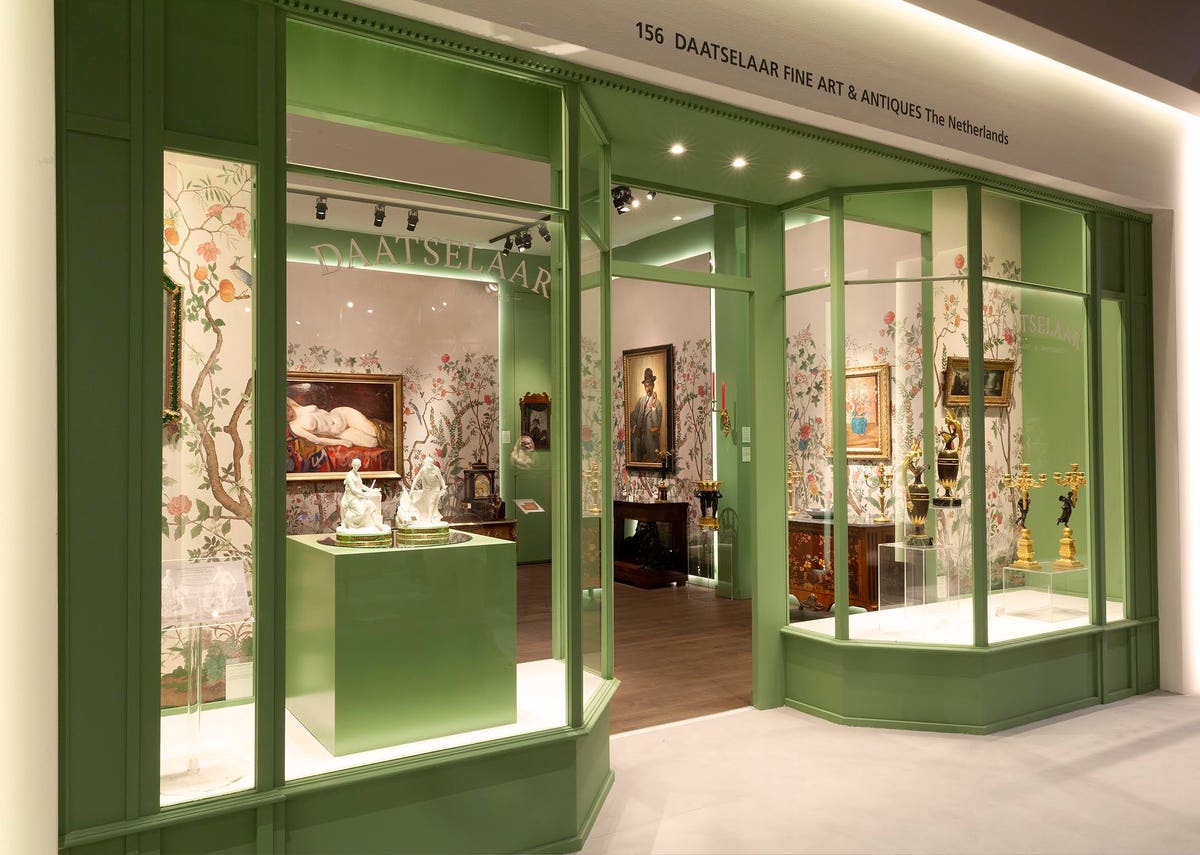 We’re transported to an elegant, serene, nonpareil shopping journey via the Daatselaar Fine Art & Antiques of Utrecht, the Netherlands, booth at TEFAF Maastricht. Standing out at the world’s leading fair for fine art, antiques, and design requires months of preparation and painstaking attention to detail. Daatselaar succeeds in creating a spectacular intimate space within the massive fair featuring 242 dealers from 20 countries. This year’s fair, which opened to robust sales during VIP previews on June 24-25, runs through June 30.

Justice, wielding a sword, and Peace, holding a scale in her left hand and a cornucopia in her right hand, each stand on a green porcelain base with gilt-bronze mounts. Dated 1781-1789, the statues were created in the preeminent Parisian porcelain factory active between 1781 and 1828. Christophe Dihl, who co-founded Guérhardt et Dihl with Antoine Guérhard, was a chemist, and the factory experimented with new colors and finishes. The sculptor and modeler, Charles Gabriel Sauvage, known as Lemire, is known for unglazed porcelain figures depicting King Louis XVI and Benjamin Franklin commemorating the signing of two treaties between France and the United States in 1778, which are also at the Met.

Another highlight of Daatselaar’s booth is a Dutch Louis Seize secrétaire à abattant with jasperware plaques (1790-1795), made of an oak frame veneer with satinwood, rosewood, maple, and cuban mahogany, from a Dutch private collection. It is decorated with marquetry ribbons, foliage and festoons, and flanking Jasperware plaques set in a rectangle cartouche.

Paving stones, cacti, and an intoxicating scent summon us, transporting us to a different place and time through the Galerie Gismondi of Paris booth. We encounter an intricate display, spanning adjacent rooms, of decorative arts spanning the fifteenth through nineteenth centuries along with sculptures, Old Master paintings, and drawings dating from the sixteenth to eighteenth century.

Gismondi captures centuries of elegance and energy, captivating our gaze with a peculiar chest of drawers sculpture from the series Ameublement calciné and Colère by Arman, born Armand Fernandez in Nice, France, in 1928. Arman, a painter, moved from using objects for the ink or paint traces they leave behind (cachets, allures d’objet) to using the objects as the artworks themselves.

While visiting his dear friend Jean Gismondi, Arman noticed the burnt remains of a boulle commode in the Louis XIV manner. The chest, which has been owned by Ludmilla Tchérina, a French prima ballerina, sculptor, actress, painter, choreographer, and author of two novels. Gismondi gifted the organic material to Arman, who took the damaged chest to a foundry and had it cast in bronze. The recreation ended Arman’s Anger cycle, a series of works embodying violent and destructive energy created by destructive acts such as slicing, burning, and smashing objects, making it the object with the highest material and emotional value to undergo the process.

In 2020, the last in-person edition of TEFAF Maastricht, Gismondi invited visitors to a booth featuring the art in-situ, or as the masterworks would have been displayed in the palaces of Francis I and Henri IV during the Bellifontaine period.

The juxtaposition reframes objects like La Marine, a delicate yet fierce, early eighteenth-century white marble sculpture by Louis Claude Vassé and Antoine-François Vassé. Originally in the Vassé family collection, it most recently was part of Baron Gustave de Rothschild’s collection at the Hôtel de Marigny, a townhouse in Paris on the Avenue Marigny, not far from the Elysée Palace.

Two years ago, the private dealer sourced marble from the ancient quarries used to build the Palace of Versailles in a homage to the Royal Chapel of Versailles.

Paris-based Galerie Léage, focused on museum quality furniture and objects d’art from the eighteenth century, once again stunned fair-goers with an opulent booth that welcomes us to ceiling-to-floor sitting rooms that incorporate the rare objects. In 2020, Galerie Léage showcased a larger room embellished with gold and green woodwork from the Regency period, and a second room adorned with paneling from the first Chateau des Marais, a moated medieval castle dating from before the 12th-century.

It’s been a joyous return to the in-person experience after last year’s fair was virtual amid concerns over the spread of COVID-19.

Denial of responsibility! Pedfire is an automatic aggregator of the all world’s media. In each content, the hyperlink to the primary source is specified. All trademarks belong to their rightful owners, all materials to their authors. If you are the owner of the content and do not want us to publish your materials, please contact us by email – [email protected]. The content will be deleted within 24 hours.
ArmanArt Fairart marketart salesart worldDaatselaarGalerie Gismondiparis
0
Share

Somesh Mathur Becomes First Indian To Be Inducted Into…

Fox Cancels ‘Monarch’ After One Season – The Hollywood…