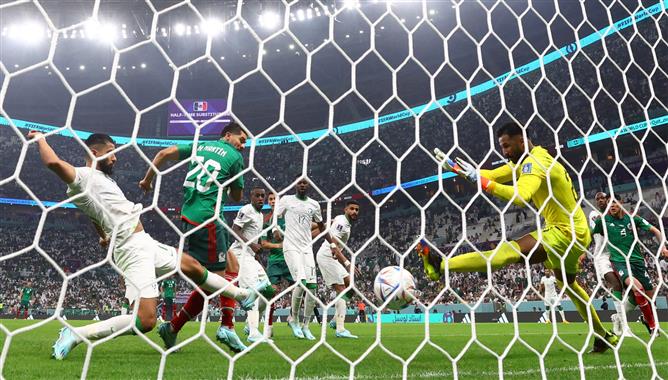 Mexico scored twice in five second-half minutes in a thrilling last-ditch bid to stay in the World Cup on Wednesday, beating Saudi Arabia 2-1 but agonisingly missing out on the last 16 on goal difference.

In the most exciting group finale of the World Cup, goals from Henry Martin and Luis Chavez catapulted Mexico back into contention, but a string of spectacular stops by Saudi keeper Mohamed Al-Owais and two disallowed efforts denied them the elusive third goal they needed to advance.

The Mexican rally took the battle for Group C down to the wire in a breathtaking half, where at one stage it looked like the Central American side would miss out to Poland for having more yellow cards, but Saudi striker Salem Al-Dawsari netted in stoppage time to make goal difference the decider.

Mexico’s exit ended a run of seven successive last-16 appearances at the World Cup and defeat for Saudi Arabia killed off what was a realistic chance of them advancing from the group stages for the first time in 28 years.

Having failed to score in their opening two Group C matches, Mexico’s chances of progressing had looked slim going into the match, hinging on the outcome of the game between Argentina and Poland which Argentina won 2-0 to top the group.

“It’s a hard blow, there are no words,” said Mexico midfielder Edson Alvarez.

“The team went out looking for it from the start and we had a lot of chances. But we couldn’t score and that leaves a bitter taste.” DESPERATE TACTICS

Urgently needing to beef up their goal difference, Mexico took the game to Saudi Arabia from the start and never stopped running, peppering the goal with speculative long-range efforts in a desperate bid to wrest control of their own fate.

Orbelin Pineda and Chavez were the engines for Mexico in a high-octane match that the Saudis struggled to get into, defending chaotically and failing to create chances on the break as Mexico pressed for goals to match Poland’s tally.

Mexico were aggressive on the attack with a staggering 24 shots on goal, eight on target, demonstrating the pivotal role of goalkeeper Al-Owais in denying them a place in the last 16.

Pineda was the catalyst for the Mexican revival with a low shot saved, a diving header blocked and a long-range strike deflected wide of the post early on.

His team broke the deadlock two minutes after halftime, when Cesar Montes’s deft back-heel from a corner found Martin who bundled the ball over the line in a crowded goalmouth.

They doubled the lead on 52 minutes when Chavez’s powerful free kick 20 metres out sailed blissfully into the corner of the goal, prompting the Mexican bench to burst onto the field in a frenzy of wild celebration.

It was an emotional rollercoaster in the closing stages. Hirving Lozano found the net but had his effort disallowed and Mexico battled hard for the decisive third but were denied constantly by the reflexes of Al-Owais in the Saudi goal.

Substitute Uriel Antuna had a late effort ruled out for offside four minutes from time before Al-Dawsari shattered Mexican hopes when he grabbed a Saudi consolation goal deep into stoppage time.

Lozano apologised to Mexico fans for not doing enough in the first two matches.

“We could have done more, but that’s football,” he said.

“I always live the games to the maximum, always giving myself every game, every ball … but well, the results didn’t come.”

Actor Vardhan Puri is making headlines these days. He talks about his passion for music, grandfather Amrish Puri & more : The Tribune India