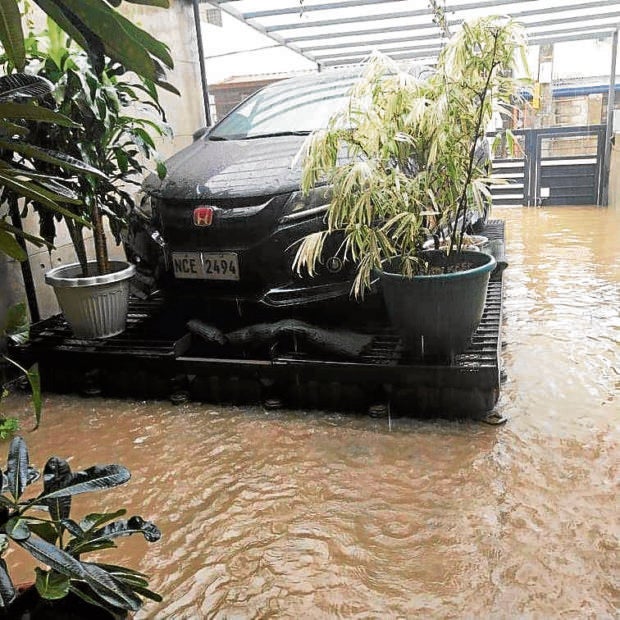 A townhouse we built in Marikina on our TV show Philippine Realty TV six years ago was designed to withstand the ravages of another Typhoon Ondoy (Ketsana). It did just that a few days ago with Typhoon Ulysses.

Phillip and Malee, the couple who bought the house from us, could only watch in awe the morning of Nov. 12 as their car floated safely above the floodwaters in their garage while their neighbors slowly watched their vehicles go completely underwater.

That’s right, their car floated—thanks to the floatable carport which we built as part of the overall concept for our flood-adaptive smart home. Unlike their neighbors, none of their living areas or major appliances were damaged. And despite the neck-deep floods, their living situation was hardly disrupted.

The author and homeowners Malee and Phillip

A few years after Typhoon Ondoy, I was faced with a unique opportunity. We were looking for a place to build a project on our show, and it just so happened that my parents had a vacant lot in Marikina that they were looking to sell. I offered them a joint venture partnership to build on their lot. The decision to pursue that project after Ondoy was not an obvious one. In fact, some thought I was downright impractical and crazy.

As part of the research phase, we went around Marikina to gather data and collate stories from homeowners. This led us to some interesting insights. People in the neighborhood showed us just how high the water levels rose. In the case of the street where our lot was located, the water marks showed that the floodwaters rose 8 feet above street level.

During Ondoy, people were stuck in their homes or roofs with no way to flee to higher ground. With no electricity and no means of communication, their immediate neighbors within a stone’s throw away were their only lifeline. Cars were all submerged underwater, and in some cases swept away and stacked on top of each other far from where they were originally parked.

An old woman resident we interviewed gingerly took out a few sacks full of used plastic soda bottles. We asked if she was going to use them to store water in the event of an emergency. “No,” she replied. “I will use them to make a balsa (raft) so I’m better prepared.”

Clearly, there has to be a better way.

Up to the challenge

The vision to build a flood-proof house was translated into an actual design thanks to the innovative team of Buensalido Architects. The young and dynamic team of Ar. Jason Buensalido was up to the challenge of creating a climate and flood adaptive townhouse complex.

The entire five-unit townhouse structure’s ground level was raised 1.5 meters above street level. And from there, the entire house was elevated to be on stilts so that the main house was now on the second and third floors. There was also nothing on the ground floor apart from the stairs access and a small service area.

In most houses, the public spaces which comprise the living room, dining room and kitchen would be in the lower floors while the bedrooms would be on the higher floors. In this case, bedrooms were placed on the second floor, while the third floor contained the living room, dining, kitchen, and main electric panel. This would play a critical role should floodwaters reach the second floor since major appliances and food supply would already be located in the topmost floor. Solar panels would also provide emergency electricity in the event of a blackout. 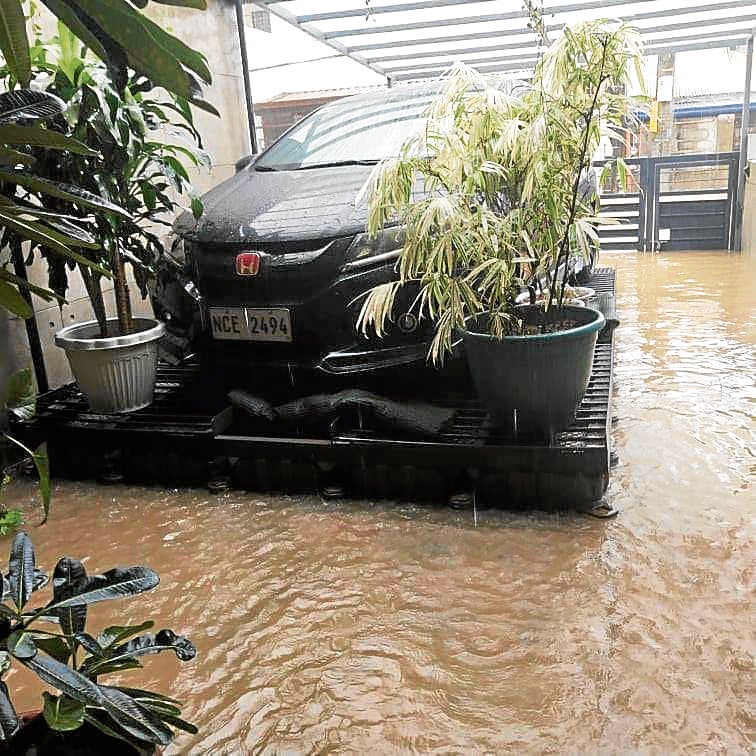 The most striking feature by far is the floatable carport. Designed to be a platform on which your parked car can be buoyant in the event of a flood, the carport features a ramp-like structure that holds high-grade pontoons at its base in place. To solve the problem of the carport being swept away by rushing floodwaters, the carport is held in place by guideposts that limit the movement only vertically, allowing it to move up or down and never side to side. 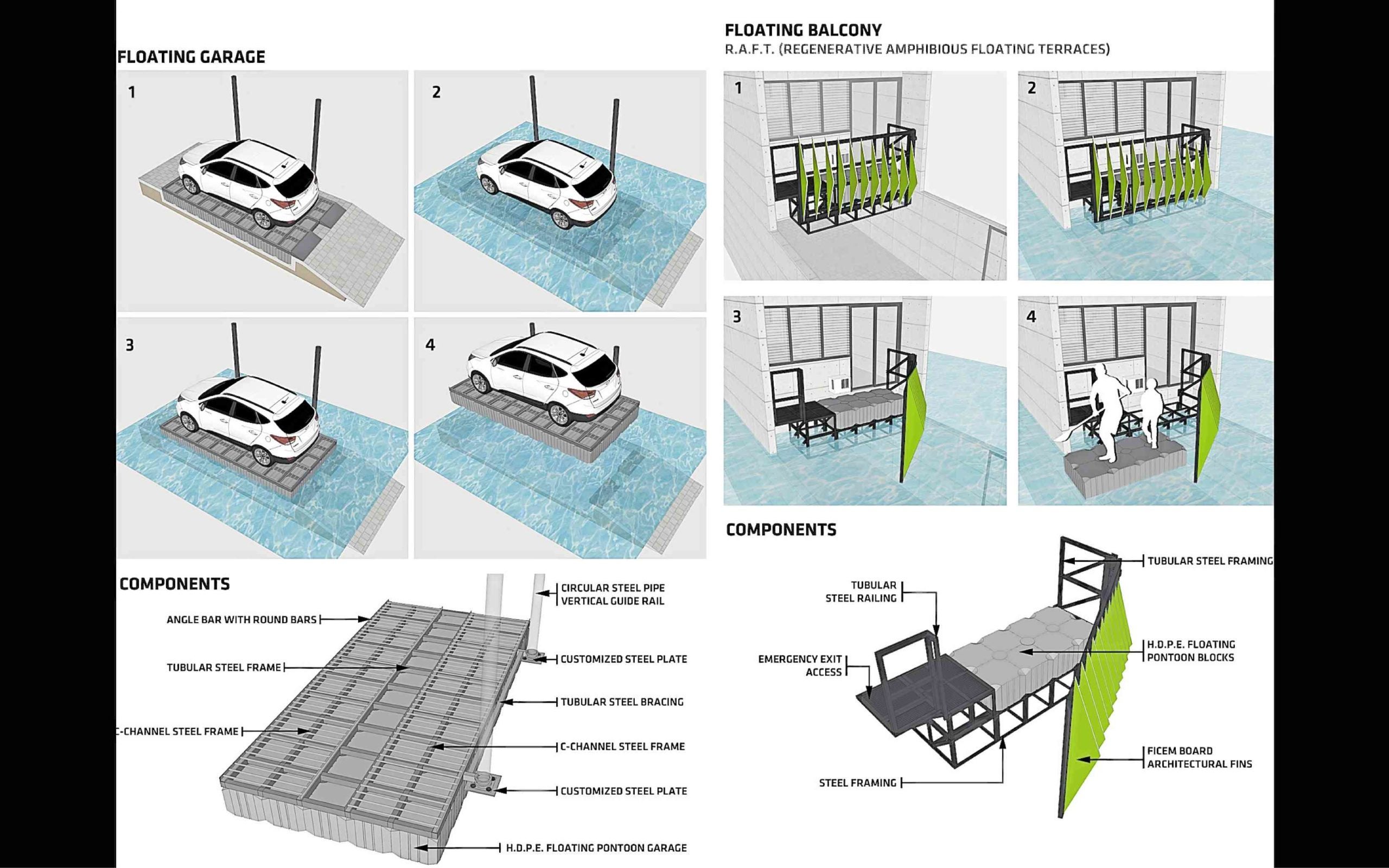 When I started seeing videos of the iconic Marikina shoe statue being swept away and hitting the Marikina bridge, I knew this was something serious. The floodwaters reached epic proportions once again. We never wanted for this to happen, but this would be the ultimate test of our flood adaptive home.

The next evening, after the waters had receded, I received videos and pictures taken by Malee and her husband Phillip. I could hardly believe my eyes as I saw the car suspended above the floodwater, almost hitting the roof overhang they recently built as an additional feature.

I made my way to Marikina the next day to hear their story. One can never expect to be greeted with smiles and laughter by people who had just gone through a major catastrophe. But that’s exactly how I was greeted by Phillip and Malee when I saw them the next day.

“It worked!” Phillip said of the floatable carport. He showed me where the water level was at its peak, and narrated how other homeowners had to park their cars a couple of blocks away. At some point, some residents swam across the street to check on their cars.

Malee shared how they invited two other families to stay with them during the height of the storm and the flooding. Since their two bedrooms were located on the second floor, they had ample space to accommodate other families in the kids’ bedroom, while their three kids along with their two helpers occupied the living room on the third floor.

When I shared the good news with Jason, goosebumps notwithstanding, he realized an important point. “We can be so intentional about designing a lot of things, but sometimes you don’t know what the design is going to transform into. We wanted a house that can allow people to escape. Not even thinking that this same house that we designed can be an evacuation center for your neighbors in the vicinity.”

I cannot help but be saddened knowing that this will most likely happen again. The systemic problems that have plagued not just Marikina but other parts of the country and the world due to poor infrastructure, climate change and the inability of different sectors to come together to rally behind solid action plans to mitigate the effects of global warming is disheartening.

Giving up, however, must never be an option. And for every dilemma we must continuously find new ways of adapting solutions that would enable us to rise above our natural and man-made challenges.

Now, we’re in the final stages of building our technology-enabled Project: Smart Home 2.0—a house designed to utilize technology to make our lives easier in the midst of this pandemic. Next year, we will be going outside Metro Manila to develop more projects.

For now, I can’t help but be thankful for the success of our flood adaptive home. It may not be a Noah’s Ark, but it saved what we intended it to save—life, property and that car in the garage.

The author is a pocket developer and executive producer of Philippine Realty TV on CNN Philippines and is the host of RealtyTV Podcast. Catch the full story of the flood adaptive smart home on RealtyTV Podcast on Spotify or Apple Podcasts.

US extends Iraq sanctions waiver until before Biden inauguration

The Japanese Robot Suit That Looks Straight Out Of Armored…

Top Tips For Your Travel Carry-On Bag This Holiday Season