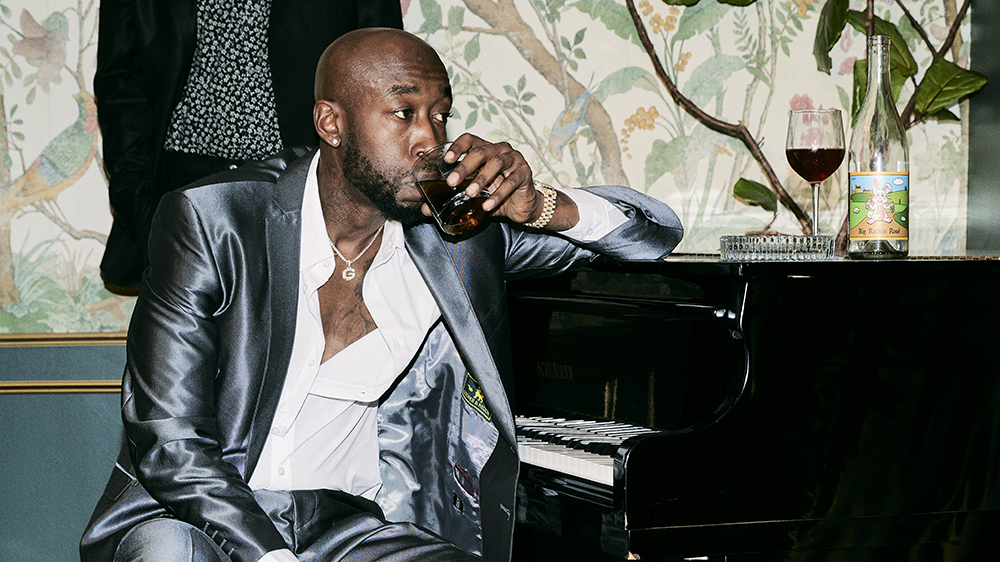 Freddie Gibbs is “The Mack” of hip-hop — hunched over a grand piano, two ice cubes in his old fashioned, white dress shirt unbuttoned to his torso, Big Boss Rabbit chain glistening across his neck. Slightly off-tune on purpose, he croons classic soul songs, from The Jackson Five’s “One More Chance” to Stan Smith’s “Stay With Me” to TLC’s “Waterfalls,” but there’s one exception: he wrote them. “Oooh, baby give me one more chance” transforms into “Oooh, baby give me one more gram,” as Gibbs gives them the Freddie Corleone treatment.

In tandem with the emergence of Blaxploitation films in the early 1970s, artists among the likes of Richard Pryor and Ron O’Neal have lent their hand as the comedic relief to tales of pimps and gangsters, dealing crack to their respective communities. Freddie wants you to ask yourself: “Is it entertainment or is it an autobiography?” Blurring the line between fact and fiction, “Soul Sold Separately” finds Freddie Gibbs on the Kane Train once again, running hijinks, opening fire and selling cocaine at the $$$ Casino.

At the age of 40, the Gary, Indiana-native is fresh off of his 2021 Grammy nomination for the critically-acclaimed collaborative project, “Alfredo,” with The Alchemist. After years of buzz from his projects with Madlib, “Piñata and Bandana,” Gibbs’ career has taken off exponentially with the aid of cult-classic producers. As he tells Variety: “I wanted this album to be a culmination of all the risks I took.”

The inspiration for “Soul Sold Separately” had been festering inside Freddie Gibbs since he was born. His father is a current member of the Chi-Lites and his mother helped raise him with that same appreciation for soul music. Although he only grew up about 30 miles away from Chicago, Gibbs relates more to Detroit and its alluring style of R&B. Freddie cites the ballads of: “Marvin Gaye, The Temptations, Smokey Robinson, [and] the whole Motown era,” as driving forces behind his love for the genre — a genre that Gibbs sees as indistinguishable from hip-hop. “That’s the fiber of our music,” Gibbs recalls, thinking back to the rising belief that R&B is a dying genre. He adds plainly: “There ain’t no rap without R&B or soul, period.”

“Soul Sold Separately” isn’t just a culmination of Freddie Gibbs’ career and musical upbringing; it’s a collage of historically-Black genres fusing together to create a film on wax, in the same way that Curtis Mayfield’s soundtrack to “Superfly” can exist separately from the 1972 neo-noir crime film that he scored. As Gibbs explains: “That’s the blueprint to a lot of this rap shit. The ‘Superflys,’ the ‘Scarfaces,’ the ‘Black Caesars’ — those films and those soundtracks and those themes fuel a lot of the street culture we see in rap. I’m always looking back at that shit for inspiration.”

With his signature, floppy-eared pink bunny rabbit on the cover, looking over a desert wasteland ridden with alien debris, “$$$ is Aliens meets ‘Casino,’” as Gibbs puts it. The $$$ Casino is timeless; you’ll find Three 6 Mafia-alumni, DJ Paul, flipping his own classic, “Pimpin’ & Robbin’” on “PSY,” you’ll hear James Blake’s eery soundscapes on “Dark Hearted,” and you’ll even get a chance to eavesdrop on a voicemail from Jesus phoning Freddie Gibbs from the Appalachian Mountains making a plan to break bread and light up a blunt with the rapper on “Gold Rings.”

Just like the inescapable Lotus Casino in the “Percy Jackson & the Olympians” series, there’s an ominous paranormal activity that presents itself through Afrofuturism on the album. In the same way that “Nope” and “The Harder They Fall” redefine traditionally white film genres such as Westerns and Sci-Fi, Gibbs reorients hip-hop to showcase how Midwestern cocaine rap can be just as cinematic and omnific as its prog-rock and art-rock equivalents.

Perhaps “Soul Sold Separately” is the prelude to Freddie Gibbs’ career in soul; one last album to remind his listeners that 13 years in the music industry has only made him sharper. He points out that having a technically flawless flow, regardless of how elaborate his rhyme scheme is, can only go so far. Freddie Gibbs is more than just a hip-hop artist — he’s a rapper, a singer, a comedian, an actor, and the list only goes on and on. In terms of vocalists, Gibbs sees himself amongst the greats: “It goes Whitney Houston, Luther Vandross, and then me. I haven’t put those skills on full display yet, but it’s coming.” After years of teasing his fans with snippets of soul parodies, “Soul Sold Separately” is the pinnacle of Freddie Gibbs’ rap career and only the beginning of his path to becoming the next Rick James.

Anne Heche’s Son Claims Signature In Her Will Was Forged, Files To Assume Control Of Estate