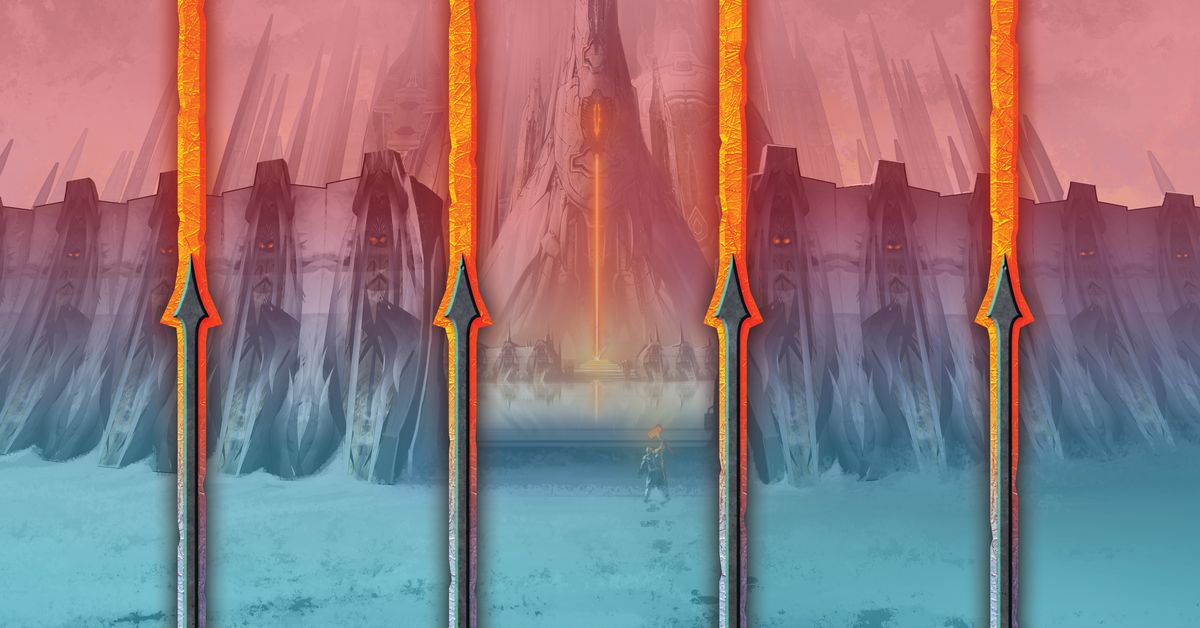 Every tabletop enthusiast has a favorite mechanic. Mine is deck construction. I’m an avid player of Ascension, a meddler in Magic: The Gathering, a lover of Gloomhaven, and a fiend for all other staples of the genre. To say I was excited to hear that Richard Garfield (creator of MTG) and Justin Gary (creator of Ascension) were creating SolForge Fusion together is an understatement. After many months of Kickstarter tracking and Reddit forum searching, last week I finally got to blaze the trail to the forge — just ahead of this year’s Gen Con in Indianapolis.

Fundamentally, the game is a revival of the original SolForge (a free-to-play digital card game released in 2016). Fusion was designed as a trading card game that could be playable for players of all skill levels. That means introducing a deck building mechanic that avoids the traps of overpowered “net decks’’ (created by one player, uploaded to the internet, and copied by the masses to crush opponents) and reduces the startup cost.

Another key goal the devs had for Fusion was crafting the story and lore. On a call for this story, Gary mentioned that over three years of arcs have already been written, and the game’s official release is still over a month away. This is an impressive feat considering players will help shape the future of the SolForge Fusion universe — each narrative tree will branch and change based on the outcome of Storyline Events (competitions once per release that decide the outcome of future plot points), the first of which is happening this weekend at Gen Con.

I played my first match on Tabletop Simulator (TTS) with Gary, and we started out by setting up our virtual table. With our decks fused and Forgeborn chosen, we each drew our hands and it was time to see who would start with the forge.

The game chose Gary to begin, so it was time for me to sit back and watch his play. When your forge is lit, you can play cards to the front of any of your five lanes or banish a card from your hand, plus take any free actions. Once a card is played, the deck upgrading begins. The lower-level version of the card is banished and the next-level version is placed into your discard pile.

He finished his turn and it was my chance to respond. All elements of play were the same on my turn except that my creatures were played to the back rows of my lanes. After we each had finished two turns, combat began. Creatures in the front row attacked and dealt damage to other creatures or hit the opposing player directly. Creatures in the back row could only defend.

We went from lane to lane, banishing creatures that had died in battle, adjusting our life for damage received, and wrapping up the combat phase. With that, our first deck phase was complete. The forge was then passed to me, and we drew fresh hands of five cards to start the next deck phase. Play continued until I reached zero health. If neither of us had reached zero by the end of the fourth deck cycle, whoever had the most health remaining would have won.

After my initial game with Gary, I did my own playtesting to get to know the game better.

There is a distinct learning curve to gameplay. I noticed that unlike MTG or Ascension, SolForge Fusion doesn’t have a slow ramp-up. There are no lands or resources needed to play stronger spells or creatures. In some ways, I really enjoyed this. Instead of the game dragging on with nothing on the board, play popped off immediately. Unfortunately, this feature can be intimidating for new players since there isn’t much time to learn the turn flow or deck cycles before being thrown into the fray.

I also noticed that my fellow playtesters and I tended to forget to use our Forgeborn powers. We would often get distracted by other play elements or just get confused about what did what. It takes one to two games with a faction’s cards to really understand the synergy and how best to wield them. With limited play time and access only to the online TTS version, it was difficult for us to get into any strategy.

Another pattern was sweeping victory. Especially between two new players, wins tended to be by a wide margin rather than a few points. In my playtesting, one player often won a game, then lost the next spectacularly. Once a solid row of creatures was played, it was nearly impossible for the opponent to avoid taking 20-plus damage in a single turn. Even on officially sanctioned livestreams I watched that pitted staff from developer Stone Blade Entertainment against each other, gameplay trended towards players winning in a landslide versus finessed victory.

There are many interesting and enjoyable aspects of the game, though. The one-of-a-kind decks keep drafting and fusion feeling fresh. Deck creation never really ends, since you continue to build while you play. The same fused deck can behave totally differently based on the cards you play and upgrade during the game, which is a major draw.

Gary and Garfield have removed some barriers for new players to get interested in the title. Booster sets and packs can be combined in thousands of ways, letting players get more out of the game without buying costly decks right off the bat. The game is also a hybrid deck builder, so it will launch on TTS and to tabletops concurrently. Unlike other titles with companion apps, like Ascension, players can scan the unique decks they create and upload them. This avoids online play being just a virtual platform, and allows the true game experience to be achieved both online and off.

Playing SolForge Fusion on TTS is not perfect. Loading errors and design flaws (like overlays obscuring five of my lanes from my opponent) end up drawing players out of the game. Especially for those new to the platform, the interface can take a lot away from learning and enjoying the game. There have been several delays to the game’s release and I would have loved to see the devs use that time to create a companion app produced with the same scan-and-play capability.

A nice element the hybrid launch offers is that officially sanctioned tournaments can be held online right away. Decks and players will also level out of competition tiers. This prevents newcomers from being dumpstered by pros, and also provides incentive to increase a deck’s level to compete in higher-tier events.

But will the game be able to hold the interest of casual players, or fall into a primarily competitive loop? There is great replay value and there are unique deck building aspects that I definitely appreciate, but I’m unsure if the gameplay itself is doing anything new. Is it relying too much on the allure of competition and the variability of decks? Only time will tell.

Among the new releases this week is Brad Pitt-starrer Bullet Train : The Tribune India

After wiping out $6.7 billion in medical debt, this…