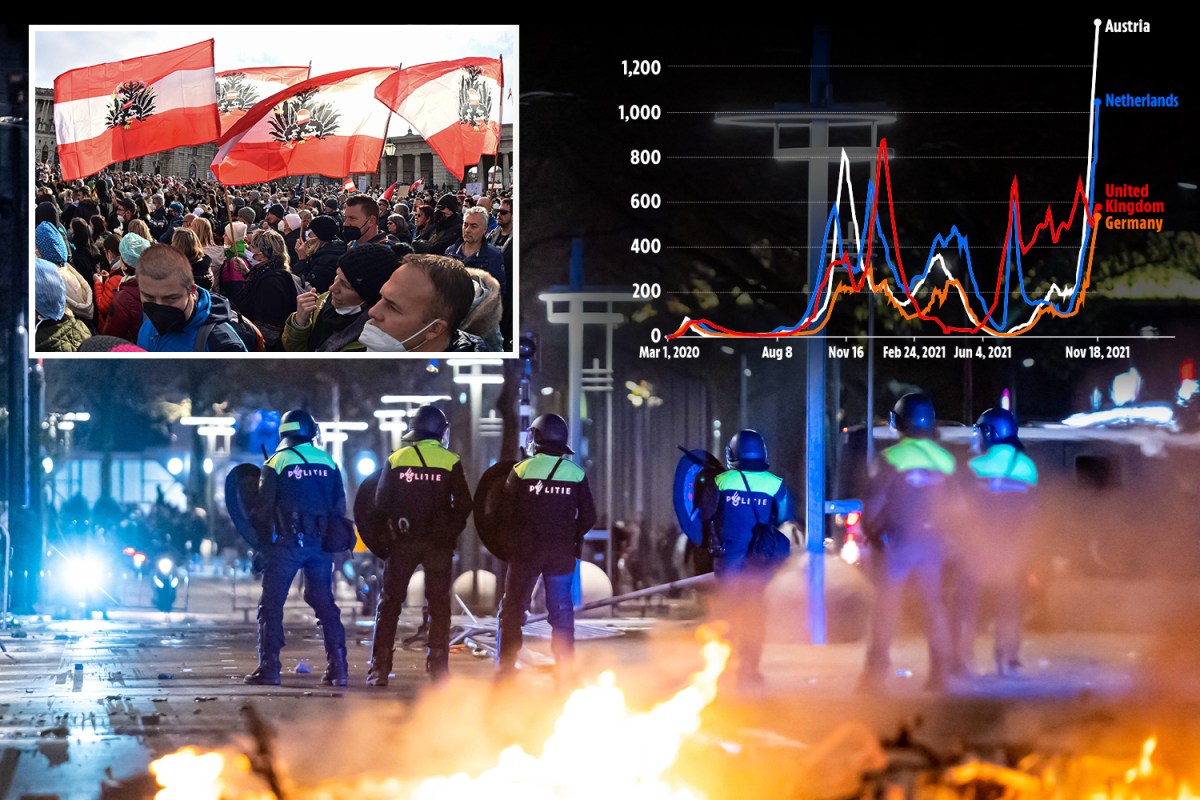 GERMANY is set to become the latest European nation to make vaccines compulsory following a worrying spike in Covid cases.

Ministers and experts said a move to make jabs mandatory was “unavoidable” as the country grappled with a fourth coronavirus wave.

The European powerhouse recorded 48,201 infections on Saturday – the highest number of new Covid cases since the beginning of the pandemic.

It comes as Austria made vaccinations mandatory from February 1 and was preparing to plunge itself into a brutal 20-day lockdown from Monday.

World Health Organization said Europe was the only region in the world where Covid-related deaths had increased last week.

The latest wave is already overwhelming hospitals in Germany, with health chiefs warning the situation had become “extremely critical”.

Germany’s vaccination rate has remained stubbornly low at 70 per cent, making it especially prone to a resurgence of the virus.

Bareiß told DPA news agency: “It is politically no longer justifiable that entire industries, retailers, restaurants, clubs, bars and the entire cinema, cultural and event scene live in a state of crisis prescribed by the state for 20 months and are faced with great existential fears, while others are concerned take the freedom not to vaccinate.

“So far, historical measures and sums of money have been able to save many companies. That doesn’t work in the long run.”

He said: “We are now in a situation – even if this produces a news alert – where we can’t rule anything out.

“We are in a national emergency.”

Jürgen Graf, as senior official in the Ministry of Health, told Bild: “The situation is extremely critical. What we are currently doing is crisis management.

“This is not a problem for Covid patients, it affects everyone.”

Germany has already introduced a ban on unvaccinated people from shops and restaurants.

It comes as a recent study predicted Europe could face an additional “300,000 deaths and one million people in hospital” if Covid restrictions aren’t tightened further over winter.

Meanwhile, Austria is set to plunge back into a nationwide lockdown from Monday as Covid cases soar and hospital corridors fill with dead bodies.

Chancellor Alexander Schallenberg said the lockdown would run for a “maximum of 20 days” and imposed a new vaccine mandate.

From February 1 next year, all Austrians will also be required to have both jabs while those who refuse could face heavy fines.

Also, the Czech Republic and Slovakia have imposed lockdowns on the unvaccinated while Italian politicians toy with the idea.

It comes as raging anti-lockdown protesters clashed with police in the Netherlands, Austria and Italy over the weekend.

Thousands of demonstrators gathered in Milan and Rome to protest against the Green pass certificates, the vaccine passports required at the country’s restaurants, cinemas, theaters, stadiums, clubs, or gyms on Saturday.

Demonstrators in Vienna gathered to protest after the far-right opposition Freedom Party called for demonstrations and vowed to fight new Covid restrictions.

The 35,000-strong crowd chanted “no to vaccination”, “enough is enough” and “down with the fascist dictatorship” and waved Austrian flags as they stream into Heroes’ Square, leading to 10 arrests.

In the Netherlands, anti-riot police used water cannons to disperse a violent crowd of protesters who firebombed a police car and set off fireworks in one of Rotterdam’s main shopping districts as they railed against the country’s partial three-week lockdown.

Dutch police have said that 51 people have been arrested, with about half of them being underage.

A number of protests against Covid-19 restrictions also took place in Switzerland, Croatia, Italy, and Northern Ireland on Saturday.

We pay for your stories!

Do you have a story for The Sun news desk?

10 of the most eerie, terrifying or weird places in England worth a day trip

MOT changes would result in millions of dangerous cars on UK…

Apple introduces new accessibility tools for the disabled on…