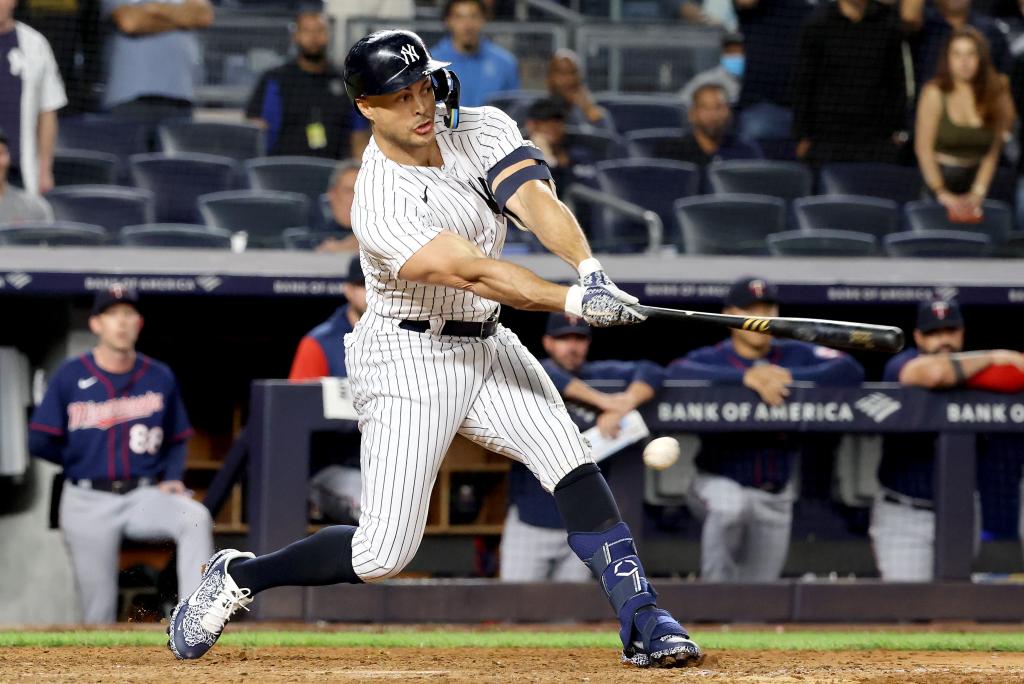 The Yankees are hoping to at least get one big bat back during this weekend’s showdown against the Rays after a cameo on Thursday night.

Giancarlo Stanton was out of the starting lineup for a third straight game on Thursday, still feeling the effects of fouling a ball off his foot on Monday, but was able to pinch hit in the eighth inning of a 4-3 loss to the Twins.

With the tying run on third, Stanton worked a nine-pitch at-bat before striking out against left-handed reliever Caleb Thielbar.

“I thought he had a great at-bat tonight,” manager Aaron Boone said. “I thought that was different right there. Just missed a handful [of pitches]. … Tonight was encouraging to see him have that level of at-bat.”

Still, Boone was not sure whether Stanton — who is now 4-for-39 (.103) with no extra-base hits since returning from the IL with left Achilles tendinitis — would jump right back into the starting lineup on Friday.

Anthony Rizzo, meanwhile, remained at home on Thursday in the second day of having no activity to treat his headaches that may have stemmed from the epidural he received last week to treat his lower back issues.

“When he starts to get up and move around [Friday], if the headaches are gone, then it’s a situation where we could start ramping him up,” Boone said.

The Yankees placed Rizzo on the IL on Tuesday, but because it was retroactive to Saturday, he would be eligible to be activated in time for the team’s series beginning next Tuesday against the Red Sox.

The Yankees are still determining the next step for Luis Severino (right lat strain) after he made his second rehab start Wednesday with Double-A Hartford, throwing four innings on 45 pitches.

Severino could either make one more rehab start, to build up his workload further, or slot in against the Red Sox next week in Boston. The Yankees have some flexibility with their rotation with off days set for Monday, Thursday and Sept. 19.

“He’s doing well,” Boone said. “I watched his outing, I thought he threw the ball well. … We’ll talk about that over the next couple days. But it’s possible he could be back for that [Red Sox series].”

Isiah Kiner-Falefa started at third base for a third straight game Thursday, with Josh Donaldson remaining on the paternity list. Donaldson is expected to be back by Saturday, but in the meantime, Kiner-Falefa returned to the position where he won a Gold Glove in 2020 with Oswald Peraza filling in at shortstop.

Lou Trivino was unavailable to pitch Wednesday because of back spasms, but the reliever said they are a yearly issue that typically go away with two or three days of rest. … Reliever Scott Effross (right shoulder strain) is scheduled to throw a bullpen session on Friday or Saturday, said Boone.

Rays star shortstop Wander Franco is set to be activated off the IL on Friday to face the Yankees, according to the Tampa Bay Times.

Jose Trevino was named the Yankees’ nominee for the Roberto Clemente Award, given to the player “who best represents the game of baseball through extraordinary character, community involvement, philanthropy and positive contributions, both on and off the field.”

When to plant chillies: Best time to sow seeds for a long harvest – ‘incredibly versatile’