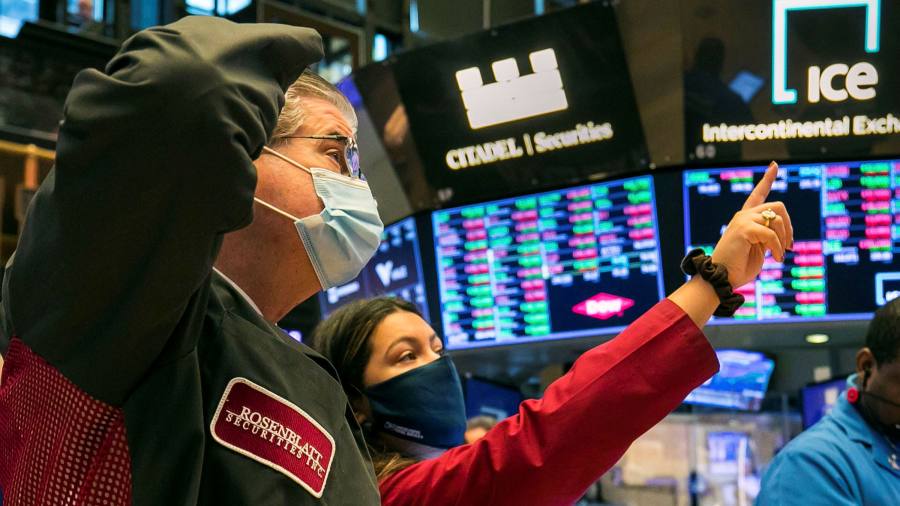 Global stocks were on track for their best month on record on Friday, propelled by a series of Covid-19 vaccine breakthroughs and optimism surrounding the US presidential election.

MSCI’s index of developed and emerging markets crept 0.1 per cent higher, putting the benchmark close to its record peak. The global index is up 13 per cent in November, after investors bought into risky assets, encouraged by upbeat vaccine news from pharma groups Pfizer, Moderna and AstraZeneca, which raised hopes that an end to the coronavirus crisis could be in sight.

The Stoxx Europe 600 share index was up 0.1 per cent at midday in London, keeping the region-wide benchmark on track for a record monthly gain of more than 14 per cent.

“It’s incredible, absolutely stunning,” said Fahad Kamal, chief market strategist at Kleinwort Hambros. The month’s gains are “all linked back to one crucial factor and that’s the vaccine”.

Europe has been a particular beneficiary because its equity markets are tilted towards value stocks, which are poised to gain most from a recovery, Mr Kamal said. The continent, which is sensitive to global trade, also received a boost from Joe Biden’s election victory, said Mr Kamal. With the Democrat in the White House, “there’s going to be more stability in trade negotiations going forward”, he said.

In the US, futures tipped the benchmark S&P 500 to rise 0.2 per cent when Wall Street opens for a truncated session following the Thanksgiving holiday on Thursday.

The hunger for stocks has been reflected in investment flows, with $89bn flooding into equity funds over three weeks in November, a record haul, according to analysts at Bank of America.

“The US election coupled with the vaccine [news] has removed two quite significant tail risks from the market,” said Maya Bhandari, fund manager at Columbia Threadneedle Investments. But given that investors still have cash on the table “there does still appear to be room to add further”, she added.

Despite November’s gains, the Stoxx 600 is still 6 per cent lower than where it started the year, while London’s FTSE 100 remains down 16 per cent.

Taking the edge off the upbeat mood were doubts raised about AstraZeneca’s vaccine candidate, which had been hailed as cheaper and an easier jab to store than the alternatives, following a mix-up in the dosage given to one group of trial participants. The company said it would run further tests to address the questions about the vaccine’s effectiveness.

Optimism has also been held in check by the surge in coronavirus cases in the US and tightening social restrictions in Europe.

Investors were grappling “with the likely spread in the pandemic over the colder winter months ahead as well as potential disruption with AstraZeneca’s vaccine rollout”, said Jim Reid, a strategist at Deutsche Bank.

However, the broad sentiment remained bullish. Paul Dales, chief UK economist at Capital Economics, said encouraging vaccine news meant that “by the middle of the decade the economy won’t be much smaller than if the Covid-19 crisis had never happened”.

Brent crude, the international benchmark, rose 0.9 per cent to $48.25 a barrel. Oil prices have tracked stocks higher this month on hopes of a rebound in fuel demand once a vaccine is rolled out, taking the market back to levels not seen since the early stage of the pandemic.