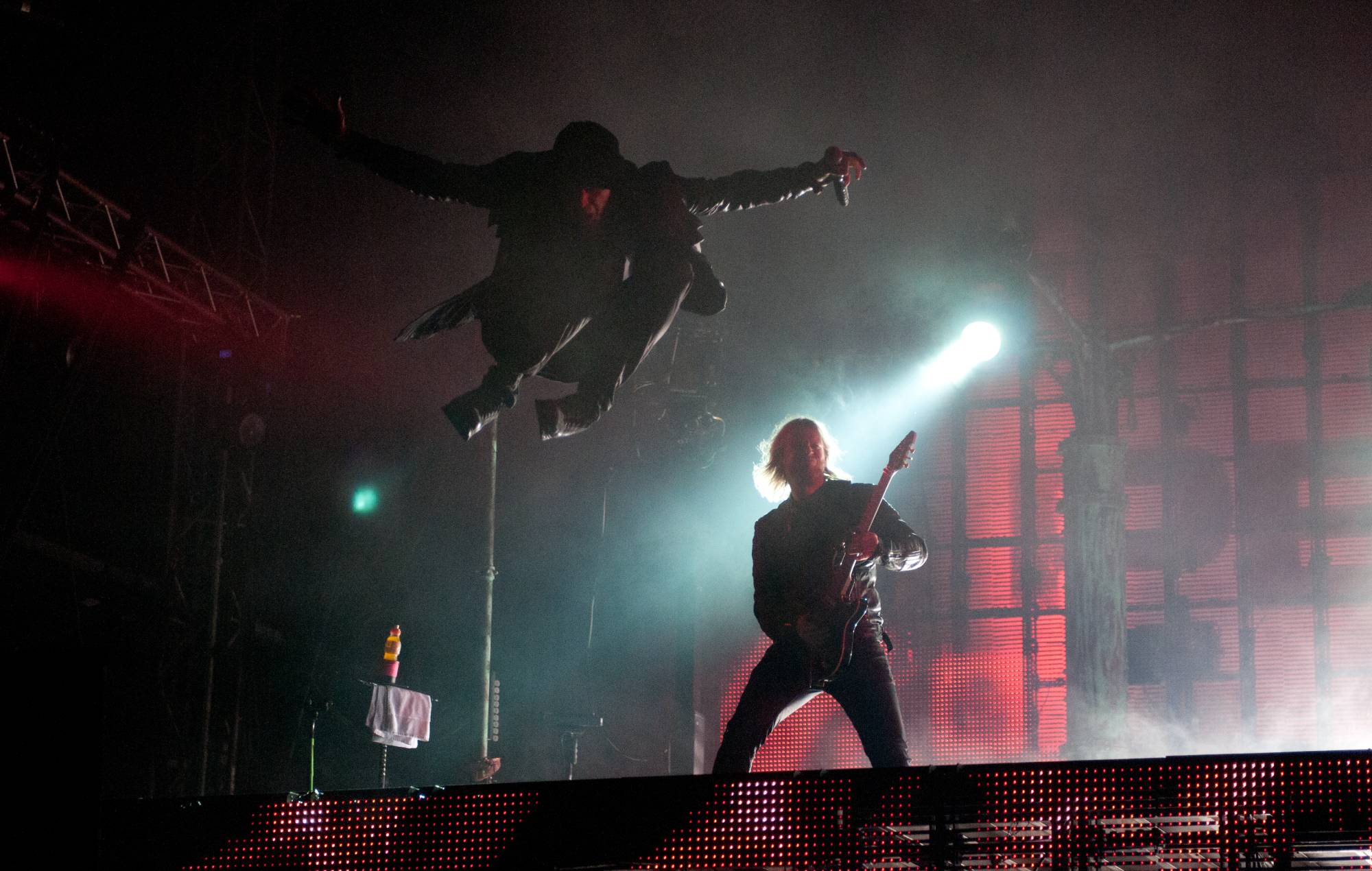 The UK government has been warned again that musicians and crew “could find themselves unemployed en masse”, after a hearing at the House Of The Lords revealed the damage already being caused by Brexit on those wishing to tour Europe.

NME was invited to a hearing at the House Of Lords led by industry insiders and the #CarryOnTouring campaign earlier this month (Tuesday September 6), where the impact that new post-Brexit touring rules were having on the lives and jobs of UK musicians and road crew was revealed. Music fans are now being encouraged to write to their MPs to demand action.

Last year, the UK music industry spoke out together on how they had essentially been handed a “No Deal Brexit” when the government failed to negotiate visa-free travel and Europe-wide work permits for musicians and crew. As a result, artists attempting to hit the road again after COVID found themselves on the predicted “rocky road” for the first summer of European touring after Britain left the EU – finding that the complications of Brexit are “strangling the next generation of UK talent in the cradle”.

The hearing from live music industry workers at the House Of Lords – attended by a number of MPs and Lords but no one from the Conservative Party – presented the main obstacles once again; that work permits were creating extra red tape for people to be hired from the UK, that carnets and the lack of clear information was leading to extra expense and confusion, that it was unknown how much merchandise could be taken and sold, and that the 90 out of 180-day access rule was having dire consequences and seeing many artists and crew either not hired or sent home from tour.

The centre-piece of the hearing came from drummer Steve Barney, who found himself unemployed as a result of the new rule that UK citizens can only stay in the Schengen area for a maximum of 90 days in every 180 days without a special visa. An open letter from Barney read out in the hearing has since been shared thousands of times on Twitter.

Barney, who has over 25 years of experience playing with the likes of Annie Lennox, Jeff Beck and Sugababes, wrote that he was thrilled to be invited on tour with Italian artist Gianna Nannini having lost two years of work due to the COVID pandemic. He was then asked to join Anastacia on tour, having drummed for her for over 12 years and 500 gigs. Sadly, the 90 out of 180 rule would put an end to his plans as he had already spent 78 days in the Schengen area.

“Despite the best efforts of the production manager, Anastacia’s manager, and myself to obtain an extended Schengen visa, we were unable to do so because it turned out such a thing does not exist!” he wrote. “Once management came to the conclusion that there were no legal means by which I could spend another three months in the Schengen area on another European tour, my offer of work was withdrawn, and I lost my job of 12 years.”

An open letter
by @barneydrums

He continued: “I am absolutely devastated, frustrated and angry. The loss of a place in this band is a massive blow to me financially, mentally and creatively. Throughout my entire career, I have travelled freely across Europe without an egg timer counting down my time left. Ultimately, I now feel like I am being penalised professionally, simply for being British.

“Today, this is my sob story. However, it will soon be that of every other British touring professional if it’s not already.”

Barney then pointed to a study by Best For Britain that showed that the number of British artists scheduled to perform in Europe as part of this year’s festival season had fallen by 45 per cent when compared to 2017-2019 (pre-Brexit). The drummer added that “without change, Britain’s world-leading touring artists and crew are going to find themselves unemployed, en masse, because it is easier and cheaper for touring productions to employ foreign personnel who are not subject to the same restrictions”.

Echoing the call for a cultural passport to prevent these problems, Barney wrote that “we urgently need a single, Schengen-wide visa, restoring British touring professionals’ ability to work.”

“Not only is mine a British job that has been lost, but as European tours typically include the UK, I have even lost a British job, in Britain, for the UK leg of the tour,” he added. “I am apprehensive about the future, as we can no longer compete on a level playing field with our European counterparts. We are no longer competing on quality; we are being undercut by necessity, if not convenience.”

A letter was then read out in the hearing from Anastacia’s manager, echoing these sentiments, and that they had no choice but to replace Barney with a new Finnish drummer. “This is a British job that has been lost to Europe purely to an unnecessary bureaucratic roadblock,” the letter read.

The letters were read out by Barney’s close friend and Pendulum guitarist Peredur ap Gwynedd, who told of similar woes from colleagues on a recent Iron Maiden tour and concluded: “Managers are now actively looking for musicians and crew with EU passports. The British passport is about as much use as a fart in a spacesuit.”

Ian Smith spoke of the knock-on impact that such matters were having on the UK’s standing as a “launchpad” for live music and tours.

“Often American bands and other third country national bands used to come into the UK and use it as a launchpad to go into Europe to work,” he told the hearing. “Guess what? UK technicians and crew are seen to be among the best in the world. Now because it’s too difficult, they cannot bring in crew from the UK, so they’re flying directly to the EU [to launch].

“Those technicians and crew that were going to go on tour for three months around Europe and generate GDP for the UK have now lost their jobs. That’s the bottom line.”

Singer, producer and promoter Pat Fulgoni also spoke at the event about how Brexit was likely to damage the UK’s standing as one of the leading exporters of music, as well as take work away from thousands of skilled UK workers and artists – he himself losing “a lot of income” from opportunities abroad.

“As an artist, I now find myself on universal credit because I can’t afford to survive from music,” he said. “I’ve been in the game for 25 years. That’s not a sob story – that’s just the reality. There are a lot of people like myself who have left the industry and just gone, ‘It’s over, I’ve had enough, I can’t look after my family’.”

He continued: “Particularly the youth and people from more disadvantaged backgrounds and in genres like grime and emerging styles that we should be supporting, they just see [music] as a pipe dream and not an opportunity. They think there is no way that they’re ever going to get to experience what I used to get up to, which was get in a van with a band, tour Europe, develop my craft and earn money from it.

“That’s a massive problem now. We are losing our position in the world, we are not being taken seriously as an industry internationally, and we’re too much hassle. I was looking at getting a tour together and realised that I’m just not worth the effort when compared with bands from Germany or France. There’s just far too much red tape, and it’s too expensive for me to sort that out.”

James Kennedy is a rock solo artist, DJ, producer, podcast host and owner of Konic Records. Speaking at the hearing, Kennedy admitted to being “one of those artists who have cancelled their European tour, as have many of my friends”.

“Until I got involved in the campaign, I didn’t have a clue what any of the regulations were, so I just stayed away from it,” he said. “Those of my friends who are out there in Europe are with bands like Iron Maiden, one of the biggest bands on the planet. I spoke to their guitar tech three weeks when they got back from their European leg, and he said it’s the single worst touring experience that he’s ever had.

He continued: “The feedback that I’m getting from the entire food chain – from the small independent bands to bands like Iron Maiden – is that no one has a good word to say about the experience at all.

“What it comes down to is a few main elements. Everybody hates the carnet; it’s expensive, no one understands it, it’s not an exact science, and people can’t find the customs guy at the border. It’s chaos and confusion. We don’t know what we’re supposed to be doing.”

It was a pleasure to take part in the hearing at the House of Lords yesterday, providing evidence of how the touring industries are suffering as a result of Brexit – with the brilliant & tireless @CarryonTouring_ campaign & some super cool dudes. Great job to everyone involved ✊ pic.twitter.com/CiwqleqwGM

He added: “My passion is music and my community is musicians. This is way bigger than just music – this is the crews, the lighting techs, the sound techs, the drivers, the haulage, everything. These are all industries that have been unemployed for two years; world-class industries that are hungry to get out there and work. Now we’re stuck in this bizarre system of carnets and needing to come home after so many days.

“People just aren’t going to employ you because you’re a pain in the arse. They’ll hire a domestic crew who can do the whole stint.

Some MPs present, including Labour’s Kevin Brennan, urged the government to adopt the recommendations of the recent report from the All-Party Parliamentary Group on Music, which hold practical solutions to tend to many of the issues.

Lord David Hannay said the European Affairs Committee has begun a new inquiry into the future of UK-EU relations, including the impact on culture. Lord Mike German also claimed the 2026 date when annual negotiations with the EU will commence would be too late, arguing that “this Government does not wish to speak with the EU about anything which could get in their way”.

The Department for Digital, Culture, Media and Sport was unable to respond when approached for comment on the hearing or any potential upcoming plans to tackle the issues.

In an op-ed message penned for NME earlier this summer, Wolf Alice guitarist Joff Oddie wrote of his fears that changes brought about by Brexit “are going to seriously damage the prospects of so many new acts, who have already been held back by two years of not being able to tour due to the pandemic”.

“We cannot expect to retain our rich musical culture and heritage if we fail to support both upcoming and established artists,” wrote Oddie. “We need a new deal for touring from the Government now. It is time to tear down the barriers artists are facing touring the EU. It is time to let the music move!”