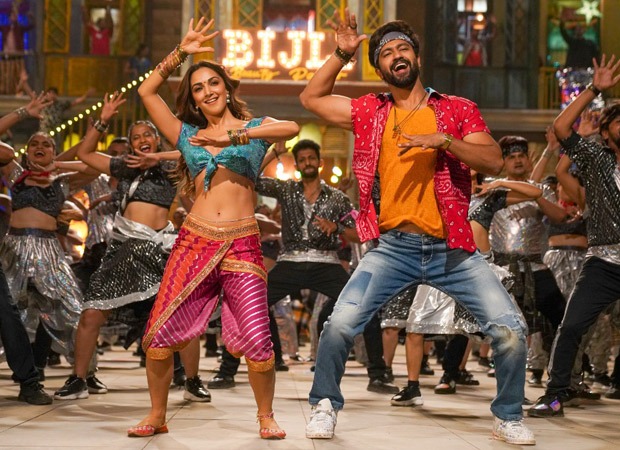 Reuniting with his Lust Stories leading lady and Bhoot leading lady, Kiara Advani and Bhumi Pednekar, Vicky Kaushal is all set to play the commercial masala Bollywood hero in Govinda Naam Mera. The trailer of the comedy suspense drama released earlier this week and now, the makers are launching the interesting tracks from the album. One amongst them is the raunchy number ‘Bijli’ featuring Kiara Advani in a Maharashtrian look along with Vicky in his ‘Govinda-style-tapori’ elements. But did you know how excited the two actors were to work on this song.

The song ‘Bijli’ is choreographed by Ganesh Acharya and we hear that the actors were enthusiastic about performing on it that ended up rehearsing it for 20 days and even attended the rehearsals on their off days. A source close to the film opened up about how Kiara Advani and Vicky Kaushal were thrilled to be a part of this dance number saying, “When Shashank Khaitan told Vicky and Kiara that Ganesh Master (Ganesh Acharya) is choreographing ‘Bijli’, both of them got so excited that they ended up rehearsing for almost 20 days. Masterji called Shashank and said that he hasn’t seen the actors this enthusiastic ever. One of the days when only the dances were scheduled to rehearse for the song, both the actors too landed there and started rehearsing.”

Coming to the film Govinda Naam Mera, the film features Vicky Kaushal as a struggling choreographer and Kiara Advani as his dance partner as well as love interest. Bhumi Pednekar plays the role of Vicky aka Govinda’s wife who is having an affair with another man. The film also stars Viraj Ghelani, Sayaji Shinde, Dayanand Shetty among others and it is slated to release on Disney+Hotstar on December 2.

Also Read: “Hate to be put into a mould”, says Bhumi Pednekar on Govinda Naam Mera