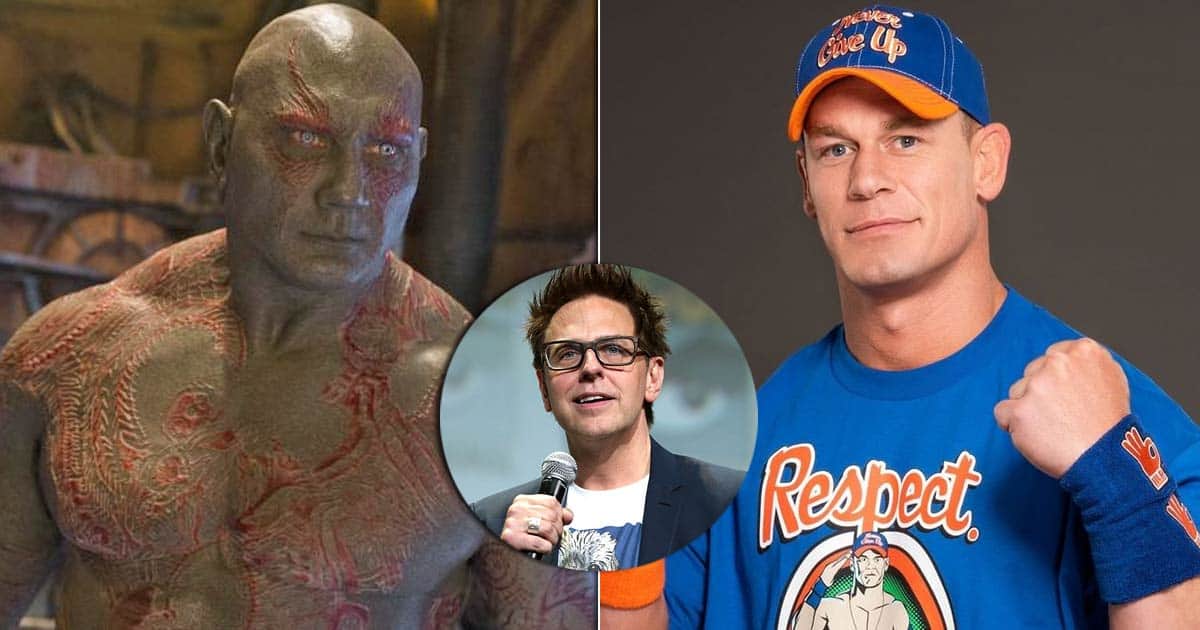 One movie in the over-flooding Marvel Cinematic Universe roaster that has kept the pop culture suckers waiting for it is Guardians Of The Galaxy Vol 3. The movie that brings back not just the prolific filmmaker James Gunn, but even Chris Pratt, Dave Bautista and the voices of Vin Diesel with Bradley Cooper, is one of the most anticipated movies across the globe. But as we move closer to the third volume, seems like the regret about the invisible Drax joke still haunts the filmmaker. Yes, the John Cena reference.

For the unversed, Dave plays the amazing Drax in the Marvel Cinematic Universe and mainly in Guardians Of The Galaxy since the Vol 1. Gun known for his pop culture sensibilities and humour, decided to make a fun joke in John Cena’s tagline ‘You Can’t See Me’ context and people were taken by storm when it made it to the big screen.

While it was all light hearted and fun and did not matter much to anyone involved, the fans and netizens stretched it so much that even years after the film’s release followed by a Vol 2, and almost near to Vol 3, they are still talking about it. Turns out Guardians Of The Galaxy Vol 3 director James Gunn now regrets that joke of his. Read on to know.

When a fan on Twitter asked James Gunn about paying forward and invisible Drax moment in Guardians Of The Galaxy Vol 3, James pour his heart out on the situation and spoke about the regret. He wrote, “Between the daily barrage of repetitive invisible jokes about John Cena in addition to the ones about Dave, I almost regret making the joke in the first place.”

Between the daily barrage of repetitive invisible jokes about John Cena in addition the the ones about Dave, I almost regret making the joke in the first place. https://t.co/LcoEaSqjIB

However, James Gunn isn’t the only person who is done with the invisibility joke, even Drax fame Dave Bautista is done. He even admitted once that he would prefer sensitive nipples joke over that. “I feel like all the people who comment every time I post a pic of myself ‘I don’t see anyone! You’re standing so still you’re invisible’ are still doing Borat impersonations and thinking how funny and witty they must seem,” Bautista wrote as per Comicbook. “I never thought I’d miss the ‘sensitive nipples’ comments!”

If you remember, James Gunn, years of Guardians Of The Galaxy Vol 1 release had banned the invisibility joke on his Instagram handle. “No more Drax invisibility jokes on this page please,” Gunn conveyed on Instagram after a fan made a reference to the joke. “We’ve reached the 10k limit.”

Guardians Of The Galaxy Vol 3 releases on May 5, 2023. Stay tuned to Koimoi for more!

Must Read: Guardians Of The Galaxy Vol. 3’s Will Poulter Reacts To Theories Around Adam Warlock Romancing Gamora: “Is That The Expectation For Vol. 3, Is It?”