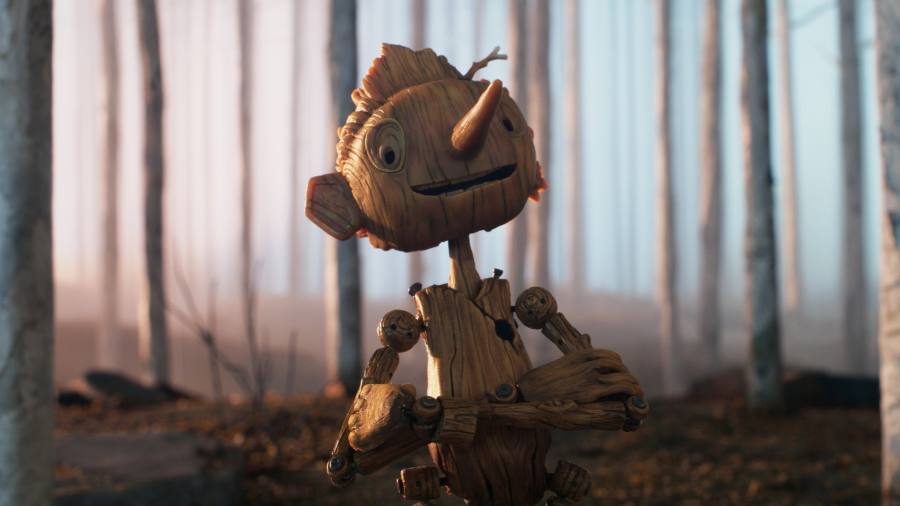 The branded title of Guillermo del Toro’s Pinocchio is not only an appeal to the director’s fan base. It is also a statement of whose Pinocchio this is not: Disney, makers of the 1940 favourite that gave the wooden boy an enduringly smooth surface. Just this September, the company released its own update with Tom Hanks playing Geppetto surrounded by slick digital technology. Del Toro sets off hard in the other direction.

His film is a stop-motion animation, rooted in Mussolini’s Italy but mindful too of the gnarly edges of Carlo Collodi’s original novel. The fantasy comes flecked with horror and the real.

What could be more horrific and real than grief? Notably, both this year’s Pinocchios give Geppetto another child in his past, one of flesh and blood who died young. But Disney treated that tragedy as mere back-story. Here, the pall falls over the whole movie. The old carpenter is left broken, his wishful carving of pine now madly Promethean, a trace of Frankenstein in the mix. Once brought to life, his new son is still visibly, unnervingly the stuff of a tree.

In spirit, however, he is already a more authentic boy than Disney’s: brattish, reckless and doomed to replace the irreplaceable. Del Toro has long filled a particular Hollywood niche, fanboy-king creator of high-end whimsies like The Shape of Water. If Pinocchio is his most overt children’s film, it is also his most powerful since the haunting Pan’s Labyrinth. Pinocchio longs to be a real boy but this take on his story asks what it is to be a real parent. The backdrop of Italian fascism is more than a director straining for import. The movie thrums with themes of flawed fatherhood.

All this may sound ponderous. It isn’t. Though the child who sees the film will need some grit, the movie also zips and thrills, the stop-motion wonderfully inventive. (Among a starry voice cast, Cate Blanchett steals the show as a gargoyle-ish monkey circus hand.) No, Del Toro’s Pinocchio brims with life. It just knows that life can also be sorrowful: the eternal snag with reality.