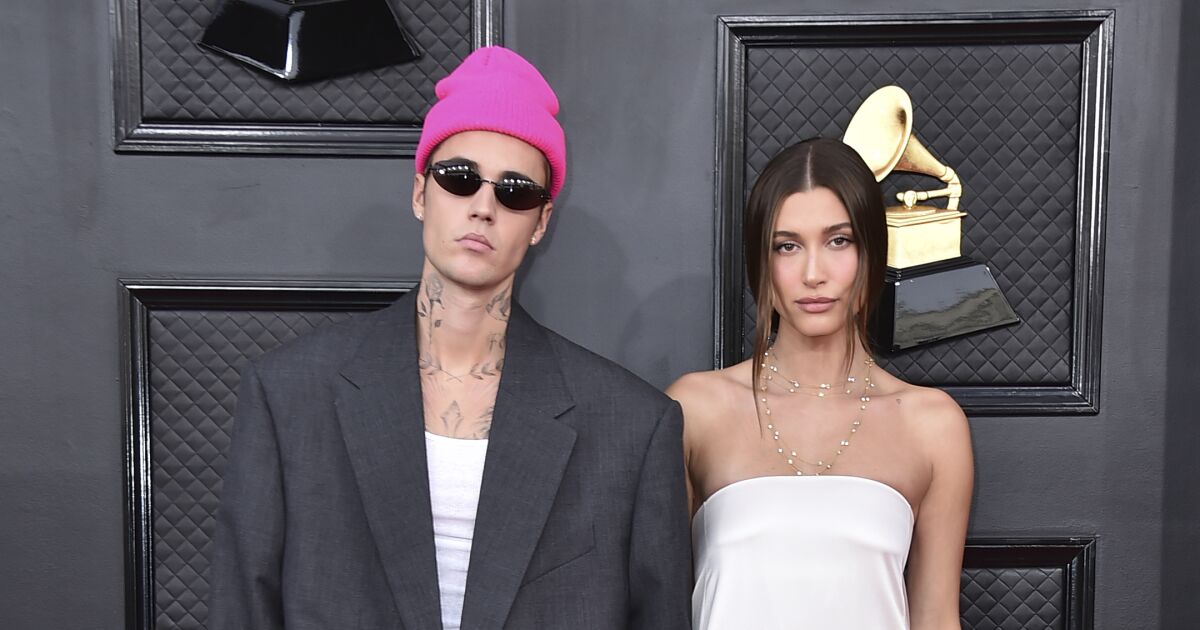 Hailey Bieber spent the majority of her interview on the “Call Her Daddy” podcast talking about her husband, YouTube sensation-turned-global pop star Justin Bieber.

But she totally gets that.

“I think even for starters — this, even me talking about him or talking about our relationship — people will take that and be like, ‘all she ever talks about is her relationship with him,’” the 25-year-old told host Alex Cooper during the episode, which premiered Wednesday.

“I’m just like, well, we are married and he’s a huge part of my life and obviously people are very interested in our life together and he’s a humongous public figure. It’s a little bit unavoidable at times. I do try to, you know, have my own thing, but it’s like our lives completely mesh together.”

The influencer (née Hailey Baldwin), daughter of actor Stephen Baldwin and niece of Alec Baldwin, has known Bieber since 2009 and the two have been linked in some capacity since 2014. The “Peaches” singer famously opened up about the early days of their relationship in a 2016 issue of GQ after he briefly dated reality star Kourtney Kardashian and made near-daily headlines for his on-off romance with singer-actor Selena Gomez.

The Rhode skincare founder and maker of the viral $17-Erewhon smoothie addressed the internet furor over her relationship with the Grammy winner, which hit a fever pitch when they got engaged in 2018 when she was only 21 and he was 24. She thinks a lot of the hate they got had to do with their ages, and even she “personally never thought” she’d get married that young. (The pair tied the knot in a series of ceremonies in 2018 and 2019.)

Bieber said she understands that the timing seemed “very rapid and very fast” from the outside, and that it could be interpreted as “really drastic and really crazy.” But their union “felt correct for the two of us at the time” and still does. “At 18 years old, I knew 100% that that was my husband,” she said.

The model also addressed the perceived overlap her relationship with Bieber appeared to have with “Jelena,” the term for Bieber’s protracted and high-profile romance with Rare Beauty founder Gomez from 2010 to 2017.

Fans of Gomez have long held that the Biebers dated while the “Yummy” singer and Gomez rekindled their relationship in 2017. Some even launched a campaign in December 2020 to troll Bieber’s Instagram Live sessions with negative commentary. But the model attempted to put an end to the overlap rumors on “Call Her Daddy.” (Not surprisingly, detractors have already come after her for speaking on the topic just before Gomez premieres her documentary “My Mind and Me” and after the actor weathered numerous health scares and “certain abuse” while dating the pop star.)

“Given the timeline of like where he was at before we got back together and what was going on, there was just a lot happening. But I will say too, like, the only people that really know the truth of the situation, what the timeline really was, how it happened and how it went down, are like me and him,” Bieber said.

“Perception is a really tricky thing because when you’re watching something from the outside, you can see it one way when it may not really be the reality of what happened behind closed doors,” she continued. “And that’s a big challenge I think of being somebody who is in the spotlight or being famous, is that I know how we got to where we got, period… I just know how it happened. I was there and I was living it every day. So there’s just, yeah, there’s a lot that I can understand why people were so, like, ‘What is going on? Like this seems crazy.’”

Cooper cut to the chase and noted that her husband had been “in a very public relationship” with the “Only Murders in the Building” star since they were kids and that “people were obsessed with the idea of them.”

“People were confused on the timeline you’re talking about, of, like, ‘Is she a homewrecker?’” Cooper said. “So I guess my question is, Hailey, were you ever with Justin romantically at the same time as her?”

“No. Not one time,” Bieber asserted. “When him and I started hanging out, like — OK, let’s just put it this way: When him and I ever started like hooking up or like anything of that sort, he was not ever in a relationship ever at any point. I would never. It’s not my character to mess with someone’s relationship. I would just never do that. I was raised better than that. I’m not interested in doing that, and I never was.”

“I think that there are situations where you can still kind of have like back-and-forth with someone but even that was not the situation,” she added.

“Like I can say, period, point-blank, I was never with him when he was in a relationship with anybody. That’s the end of it. And I had been involved with him since I was 18. The timeline also that I think sometimes is in question of like us getting together and getting engaged and him having been spending time with his ex before that — this is so crazy, I’ve literally never talked about this ever — I understand again, how it looks from the outside and there’s a lot of perception there, but that was a situation where I know for a fact that it was the right thing for them to close that door.”

Bieber, who said she felt anxiety and discomfort during that portion of the interview, reiterated that her husband and Gomez were “not in a relationship at that time” and acknowledged their “very long history” before asserting that she was speaking for herself and not on behalf of either Bieber or Gomez.

However, she did say that Bieber and her getting engaged and married “was the best thing that could have happened for him to move on.”

“And it’s hard for me to talk about this because I don’t want to talk on either one of their behalf again, because it was their relationship and I honestly respect that very deeply, but I just know what was going on when we got back together. And I know what had to happen for that to come back together in a healthy way. And I think it was the most healthy mature decision that he could have made and I respect that,” Bieber said.

“As a woman, I would never want to get into a relationship with someone and be engaged to them and be getting married to them and thinking in the back of my mind, ‘I wonder, like, if that was really, like, closed for you.’ And like, and I know for a fact that the reason we were able to get back together was because it was very much completely closed. And that is respectful to me.”

Bieber also began tearing up and said she gets nervous when she discusses the topic because she doesn’t want to “stir anything up, or like, bring anything up that is going to be like a thing.” She said she still gets a lot of hate from fervent Beliebers that’s perpetuated by rumors that she “stole him.”

“I guess maybe that it just comes from like the fact that they wished that like he had ended up with someone else. And that’s fine. Like you can wish that all you want but that’s just not the case,” she said.

She also said that she and Gomez have since talked and “it’s all respect” and love between them, there is “no drama personally” and that Gomez “doesn’t owe me anything.”

Bieber had many wholesome words for her husband, who experienced partial facial paralysis this year, including calling him her best friend and saying that “there’s nothing better than being with the person that makes you smile.” (She also called him a f—boy before backtracking to explain that his viral antics and public acting out were a result of him hurting on the inside.)

“He’s overcome so many different things in his life for being famous so young, and the fact that he’s as normal as he is, he’s literally… a very like normal regular guy — I guarantee you, someone takes this and they like f— chop it up, and make it sound like I said something different — but, I’ve known him for a very long time. We were friends for a long time before anything else and like, I just love him,” she said.

“He’s also like, he just has the kindest, sweetest, most like gentle heart and soul to me. And I’ve always thought that about him. Obviously he’s gone through phases in his life where he was being, you know, a little out there.”

18 Celeb Couples Who Broke Up Twice