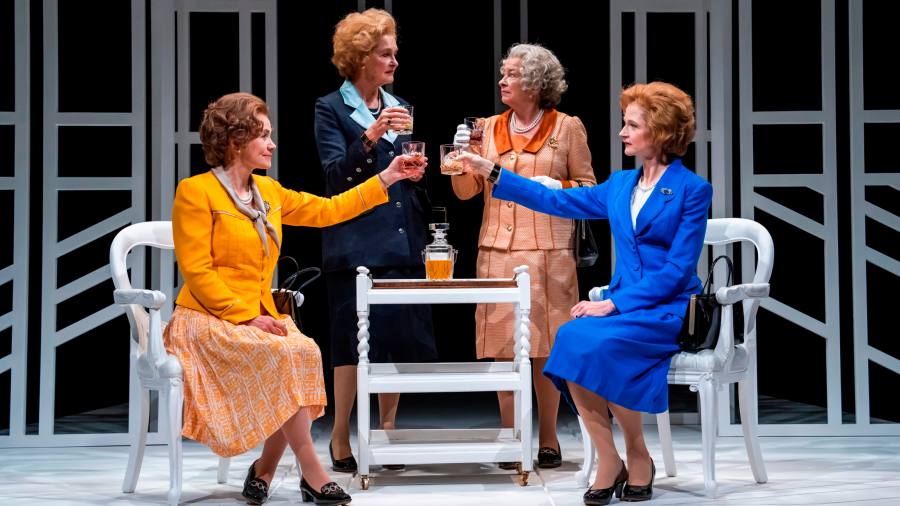 Some plays have topicality thrust upon them. When the Kiln Theatre in north London began rehearsals for Moira Buffini’s Handbagged, Queen Elizabeth II was on the throne and Boris Johnson was prime minister. The show opened last week to a new monarch, a new PM and a period of national mourning. Suddenly a droll comedy about the relationship between the Queen and her premier (in this case Margaret Thatcher) took on sombre new weight and the creative team was in doubt about whether to proceed at all.

Thankfully, they decided in the affirmative. For while charmingly irreverent, Buffini’s play (first shown in 2013) is far from disrespectful: behind all the comic exchanges lies a measure of sympathy for those in high office and the portrayal of the Queen is witty and affectionate. Meanwhile the issues Buffini considers — the role of the constitutional monarchy, the machinery of state, the limitations on each leader — feel particularly current.

In essence, the playwright does what Shakespeare and others have done before her, using dramatic licence to peep behind the curtains of power. Like Peter Morgan’s 2013 play The Audience, Handbagged focuses on the private weekly meeting between the monarch and prime minister and the intriguing fact that no one else is in the room when it happens. That’s meat and drink to a dramatist: a chance for imagination to slide in and fill the gaps.

But Buffini also brings a pinch of self-deprecating mischief to the task, undercutting her own narrative by having characters argue with one another or step out of the action to dispute the drama’s priorities. Here there are two Queens and two Thatchers, the older versions often disagreeing with their younger selves. “Philip and I had put money on the [election] result,” confides the young Queen to Mrs T. “No we had not!” cries the older monarch, aghast.

At the play’s heart is the fascinating image of these two women, the same age, both in positions of power, one elected but transient, the other inherited but enduring. The play swoops in and out of Thatcher’s 11 years in office, touching on major political events and sketching in a relationship that was rumoured to be prickly. Meanwhile, huge issues roll through the comedy, including the partiality of historical account: Romayne Andrews and Richard Cant, playing all the men in the drama, argue about the alternative histories that have been left out.

It’s certainly a play that’s tougher on Thatcher than on the Queen, who emerges here as a champion of social equality — it could apply greater scrutiny to both the monarchy and the electoral system. But it’s clever, drolly enjoyable and has now acquired a new layer of poignancy, as the events it depicts slip further into history.

Seismic social change also underpins Chekhov’s 1903 masterpiece The Cherry Orchard, as the aristocratic Madame Ranevskaya fails to deal with the economic disaster facing her country estate. Vinay Patel’s inventive new version pitches the story far into the future. Here the action unfolds on a spaceship spinning through the dark towards an elusive destination. We are hundreds of years into the mission: the ship is crewed by cloned humans (all of south Asian heritage) who never saw the Earth and various, now antiquated, bits of AI: Firs, the ancient retainer of the original, has become Feroze, a glitchy android servant, brilliantly played by Hari Mackinnon.

The legendary cherry orchard still exists, but in an arboretum. It constitutes a link back to Earth, as does the ship’s rigid social hierarchy, which keeps the lower deck workers toiling in the dark. But the mission has become sclerotic: tensions are brewing between the decks, and the discovery of a nearby habitable planet brings everything to a head. As in the original, the pragmatic engineer Abinash Lenka (Lopakhin in Chekhov) urges Captain Prema Ramesh to change course but ends by taking charge himself.

Sci-fi it may be, but Patel’s play operates as a stinging metaphor for a society too stuck in its ways to make essential change, with the setting bringing a cautionary element to it. It is hamstrung by its origins, however — the mapping onto Chekhov’s play can feel convoluted, particularly in the first half, and invites comparisons that aren’t quite fulfilled.

But it grows into something more poignant, partly thanks to Patel’s writing, partly thanks to the skill of director James Macdonald and his cast and creative crew. There’s terrific work from Anjali Jay as the charismatic, obdurate Ramesh and Maanuv Thiara as the exasperated Abinash. Rosie Elnile’s slowly rotating spaceship with its puckish central control column is a joy while Max Pappenheim’s sound design and Jai Morjaria’s eloquent lighting create a reflective mood. The melancholy sight of the receding planet at the end, as the abandoned Feroze spins off into space, makes this an elegiac reminder of the beauty of our own planet.

In a sense, The Snail House, the debut play from renowned director Richard Eyre, brings us a Chekhovian situation. A family of four are forced together by a formal dinner to celebrate the birthday of paediatrician Sir Neil Marriot (Vincent Franklin), recently knighted for his pandemic advice to government. Son Hugo (Patrick Walshe McBride) is a waspishly witty political adviser; activist daughter Sarah (Grace Hogg-Robinson) seethes with anger; long-suffering wife Val (Eva Pope) simmers with resentment and attempts to keep the peace. Assembled in an oak-panelled school dining room, they snipe and squabble, while the catering staff prepare the table and urge them to attend to the unseen guests gathering in the hall.

Eyre, who also directs, brings to his play a lifetime of working on socially engaged state-of-the-nation drama, from Ibsen to Hare, and the issues here are piping hot: Brexit, climate change, the pandemic, class, inequality, integrity . . . A huge disclosure about the former relationship between Marriot and the catering manager (played with quiet, formidable dignity by Amanda Bright) raises serious questions about medical ethics.

As a bruising summary of the many problems besetting current Britain and of polarised public debate, it’s spot on. As a play, unfortunately, it is much less satisfying. The characters too often sound like mouthpieces for points of view and there is way too much on the table: that plot-twist, in particular, deserves a whole play.

Plus it’s hard to care much about a central four that are so spiky and one-note, though the cast depict them with droll humour and Franklin brings poignancy to Marriot’s late admission of wrongdoing. There’s great work too from Raphel Famotibe and Megan McDonnell as the young gig-economy caterers, witnesses to this privileged family charade. But for all it bubbles with issues, this show is sadly flat.

The airline industry is in trouble. Is bottomless caviar the answer?