Hanukkah 2021 Recipes: Traditional Dishes You Must Have During the Eight-Day Jewish Festival 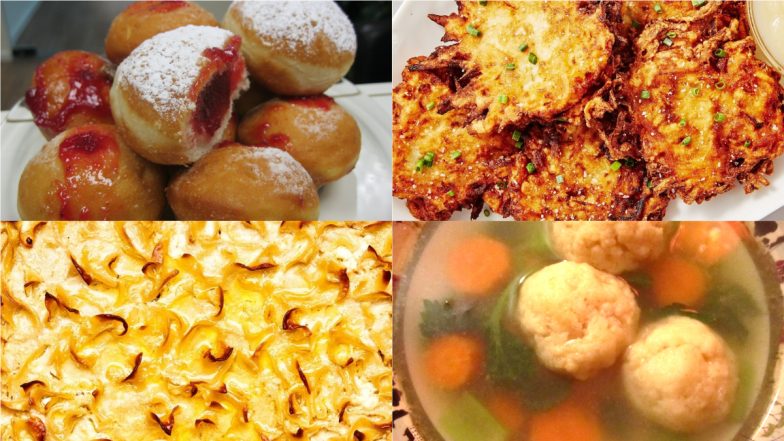 Hanukkah is an eight-day festival of lights commemorating the recovery of Jerusalem and subsequent rededication of the second temple at the beginning of the Maccabean Revolt against the Seleucid Empire in the second century BC.

According to the Hebrew calendar, it starts on the 25th day of Kislev which may occur any time between the months of late November and late December of the Gregorian calendar. This year it would start from November 28. The festival is celebrated with a series of rituals for eight days. As you observe this eight-day Jewish festival, we at LatestLY, have brought together a list of six traditional Hanukkah recipes that you can try at home.  From Loukoumades to Pancakes, Know About Traditional Food Recipes Made on the Jewish Festival.

It is stapled Jewish soup dumplings that are typically made from matzo meal, eggs, water and fat such as butter, chicken fat or oil.

Latkes are shallow fried potato pancakes traditionally made with ground potatoes. These taste the best when served with Sour cream or apple sauce.

This is a favourite recipe prepared on almost every Jewish holiday besides Hanukkah. Do not forget to add some flavour-enhancing seasonings as you prepare this dish.

The Hebrew word Sufganiyot is pronounced soof gaah nee and is derived from Greek word sufan meaning spongy or fried. They are one of the most essential Hanukkah items.

It is a traditional Jewish egg noodle casserole commonly served as a side dish. It can be made in sweet as well as Savoury form. Just swap the sugar and cinnamon with vegetables and spices.

Give your guests a memorable Hanukkah mean by incorporating a blend of traditional and modern flavours into your favourite Jewish recipes. Wishing everyone Happy Hanukkah 2021.

(The above story first appeared on LatestLY on Nov 25, 2021 06:01 PM IST. For more news and updates on politics, world, sports, entertainment and lifestyle, log on to our website latestly.com).

7 amazing Bay Area things to do over Thanksgiving weekend