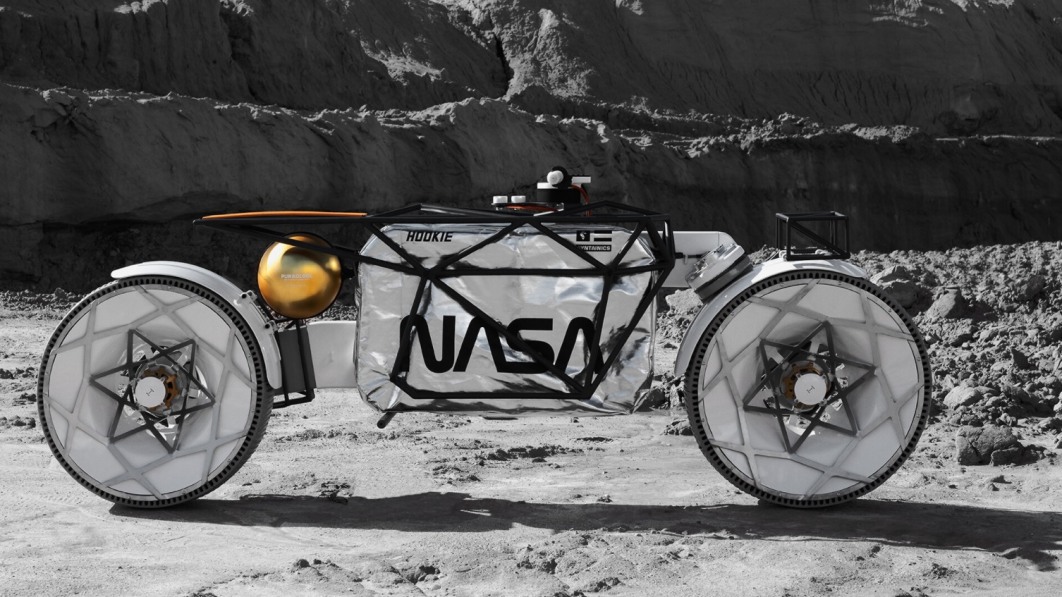 In early 2020, NASA asked automakers to help it develop the next lunar rover. It hasn’t requested a lunar motorcycle, at least not yet, but that didn’t stop Germany’s Hookie from designing one. Called Tardigrade, the concept will be displayed in the Petersen Automotive Museum.

The goal wasn’t merely to create a series of eye-catching renderings; the Tardigrade is a real motorcycle developed with lunar exploration in mind. Shaped like nothing else on the market, it’s characterized by an almost flat silhouette, an ultra-thin seat, and handlebars uniquely positioned near the middle of the wheelbase. The steering system is electronic, according to Visor Down, and it’s controlled by an app and an electric motor. There’s also a tubular exoskeleton made with aluminum mounted around the battery pack and a pair of airless tires.

“We wanted to make the Tardigrade as realistic as possible. Additionally, the design should be modular as far as possible in order to be able to use it for future interstellar projects,” Hookie explained. It added that the Tardigrade is capable of carrying both people and gear.

Hookie notes that the Tardigrade (a name borrowed from an eight-legged micro-animal) stands 2.9 feet tall and stretches 8.5 feet long. It’s entirely electric, the powertrain was provided by a Swedish firm named Cake, and it offers astro-riders a maximum range of about 68 miles. It weighs a little under 300 pounds, so it’s not unusually heavy for a motorcycle; the Harley-Davidson LiveWire weighs around 560 pounds. Besides, it’ll weigh 50 pounds in the moon’s one-sixth gravity.

While nothing suggests the Tardigrade will make its way to the moon anytime soon, it’s headed to the Petersen Automotive Museum in October 2021. It will be part of the ADV:Overland exhibition, which shines light on adventure machines built for our planet and beyond.

What Are The Best Car Detailing Products In 2022?

Smriti Mandhana named ICC women`s Cricketer of the Year for…